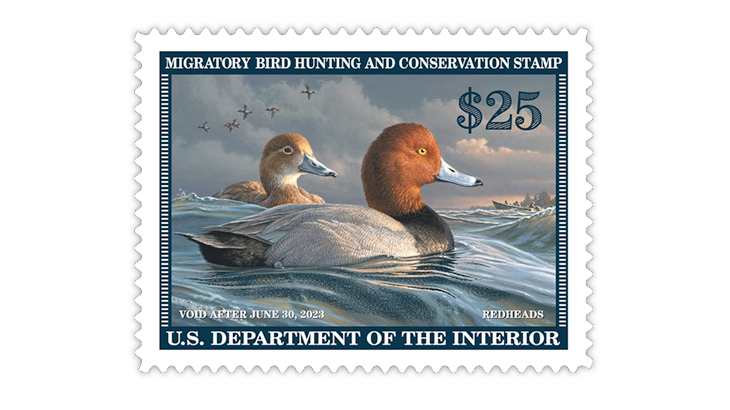 Minnesota artist James Hautman’s acrylic painting of a pair of redheads floating in water is featured on the United States Fish and Wildlife Service’s federal duck stamp that will be issued June 24 in Fairfax, Va.

As the first day of issue approaches, collectors can find additional details at the Fish and Wildlife Service website.

For the first time since 2006, the new duck stamp will feature an engraved element. But you have to look closely to see it.

“The part printed in intaglio is part of our security features,” Suzanne Fellows, chief of the Federal Duck Stamp Office, told Linn’s Stamp News. “It is in the water under the drake redhead and says ‘DUCKSTAMP22/23.’”

On preliminary artwork for the stamp, this inscription is repeated multiple times. It should be easily visible on the printed stamp when viewed under low magnification.

The 2006 $15 Ross’s Goose (Scott RW73) is the most recent federal duck stamp to feature engraving in part of the design.

Hautman’s artwork for the new duck stamp was selected from among 137 entries submitted to the 2021 federal duck stamp art contest held online Sept. 24-25. This was the second year the contest was held virtually because of the COVID-19 pandemic.

The Hautman brothers — James, Joseph and Robert — have collectively won the duck stamp art contest a record 14 times. Robert notched the most recent win; his painting of a pair of mallards in flight appears on the 2018 $25 duck stamp (Scott RW85). The 2017 $25 duck stamp features James’ painting of Canada geese (RW84).

Spies came out on top in the 2008 contest when his painting of a long-tailed duck and decoy was selected to appear on the 2009 $15 duck stamp (Scott RW76).

Although not valid for postage, duck stamps are sold by the U.S. Postal Service at post offices (in single-stamp panes only) and through its Stamp Fulfillment Services division in Kansas City, Mo. They are also available at selected national wildlife refuges and sporting goods retailers and from Amplex Corp.

Similar to the past two years, the new 2022 stamps are offset printed by Banknote Corporation of America in two self-adhesive formats: a pane of one and a pane of 20.

On the June 24 issue date, a new junior duck stamp also will go on sale. The $5 stamp will picture a green-winged teal painted by 15-year-old artist Madison Grimm of South Dakota.

Since the duck stamp program was established in 1934, sales of the federal duck stamp to hunters, bird-watchers, outdoor enthusiasts and collectors have raised more than $1 billion to conserve over 6 million acres of habitat for birds and other wildlife and provide countless opportunities for hunting and other wildlife-oriented recreation on public lands in the United States.

Duck stamp to be issued June 24 without ceremony