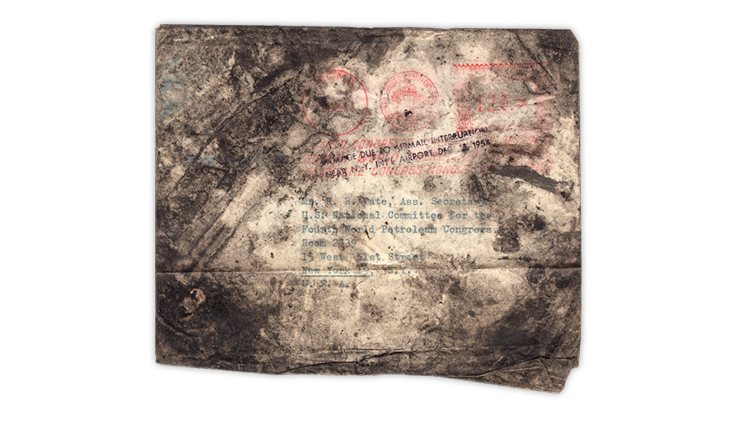 No doubt this metered cover is among the most damaged survivors of a plane crash that could still be delivered. The Dec. 18, 1954, crash of Italian Air Lines flight 451 was caused by pilot fatigue and adverse weather conditions.

So injured is the cover shown here that it is almost impossible to see the diagonal handstamp above the address that reads, “Damage due to airmail interruption near N.Y. Int’l Airport Dec 18, 1954.” It looks like oil and water attacked this metered cover.

According to the American Air Mail Society’s American Air Mail Catalogue, Vol. 1, the Italian Air Lines’ (Linee Aeree Italiane) Rome-to-New York flight 451 attempted to land on instruments at Idlewild Airport (later JFK International Airport) at 2 p.m. on Dec. 18. On its fourth approach in light rain and fog, the plane “fell short of Runway No. 4 and came down over a 2000-foot long pier and sank in Jamaica Bay,” according to the catalog.

Of the 34 passengers and crew aboard, only six passengers survived. The plane carried 2,116 pounds of mail; 95 percent of it was salvaged and processed at New York’s Morgan Station. Once an address could be ascertained, the mail was then sent on its way. In this case, the address was in New York City.

Subsequent investigation of the crash determined that the lowest clouds were below the altitude of 400 feet, which was below the minimum for landing on the runway.

Probably in an effort to get a visual on the runway, the plane was too low as it approached the airport. Pilot fatigue and “particular and difficult circumstances” were blamed for the crash.