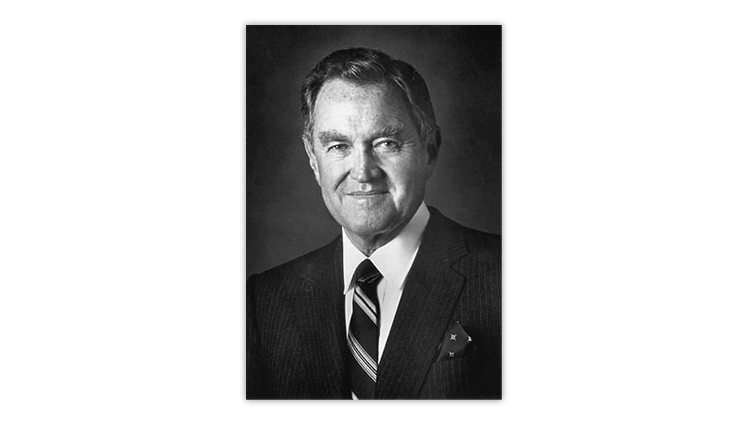 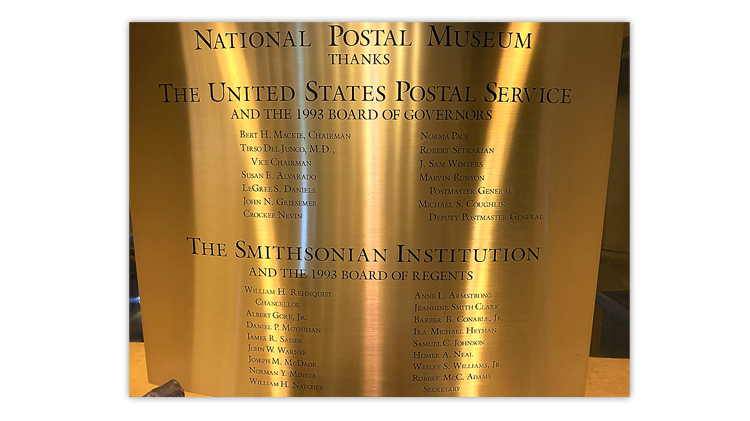 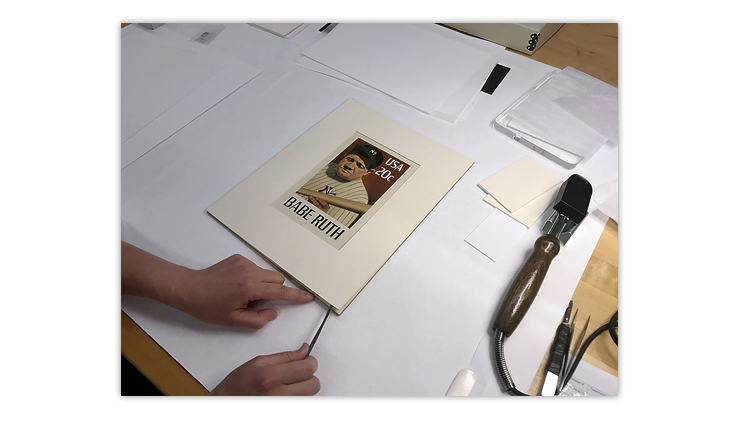 Preservation of an original essay that wasn’t used for the 1983 Babe Ruth stamp to be included in the Baseball: America’s Home Run exhibit scheduled for June 27, 2020, through Jan. 8, 2023, at the museum. Photograph courtesy of the Smithsonian’s National
Previous
Next

To many stamp collectors, Anthony M. Frank, the nation’s 69th postmaster general, will be forever remembered as the official who overrode critics to order the United States 29¢ Elvis Presley stamp in 1993. That stamp changed the nation’s stamp program, welcoming more contemporary figures to be honored with stamps.

He was also the chief promoter of what became the National Postal Museum, a joint Capitol Hill venture between the U.S. Postal Service and the Smithsonian Institution.

On Nov. 6, 1990, it was Frank, a former San Francisco banker, who aggressively pushed a skeptical board of postal governors in a closed meeting to approve an agreement that three governors feared was unfavorable to the Postal Service.

After the seven-to-three vote, Frank told Gordon Morison, who then ran the stamp program, that he knew he had the votes.

What’s equally remarkable about Frank’s agreement is that it has held strong despite the severe financial troubles in recent years.

Michael Coughlin, deputy postmaster general when the museum was created, said Frank was the person who drove the project.

“He was the key guy,” Coughlin said. “First, he believed strongly in preservation of postal history and thought the museum could do that, as well as provide a platform to display some of the technology they [the USPS] were researching and deploying.”

“He also thought it would be an opportunity to open some of the philatelic treasures to the public,” he said.

“The real challenge in getting approval was the Board of Governors to buy in,” according to Coughlin.

“The proposal was that USPS would pay a certain portion of annual operating costs, while profits from gift shop sales will fill in any gap,” he said.

“There was a lot of skepticism about what the latter would amount to and Tony was the major force in getting a majority of the board to approve.

“He later made sure that a plaque was installed at the museum, listing the names of the board members at the time of approval. It included all board members, even though not all voted for approval,” Coughlin added.

The postal museum, which opened in 1993 in Washington’s old main post office building, has received millions in postal funds since the agreement was signed, typically $3 million a year.

Those funds have been critical to the museum’s success, according to Elliot Gruber, the museum’s current director.

“My understanding is that without the Postal Service and Smithsonian coming together and forming this partnership, there would not be a postal museum,” he said.

“What the Postal Museum has been able to accomplish in our short history has really been nothing short of incredible,” Gruber said.

Those annual funds from the Postal Service have provided the museum with $48.7 million between fiscal 2004 and fiscal 2019, according to the records supplied in response to a Freedom of Information Act request filed by Linn’s.

The USPS was unable to locate precise figures for its contributions from 1991 to 2003.

Much of the Smithsonian’s funding comes directly from Congress. It is currently seeking $1.1 billion for fiscal 2021 for its 19 museums, 21 libraries, nine research centers and the National Zoo.

The Postal Museum is one of the smallest of its activities, with the institution contributing about $1.9 million a year for its operations.

The Postal Service is not the only or largest government agency contributing to the Smithsonian.

The National Aeronautics and Space Administration, for example, has been a major contributor to the Smithsonian/Harvard Center for Astrophysics in Cambridge, Mass., for decades. NASA grants of almost $80 million a year have helped fund the center.

After an initial donation of almost $15.4 million in 1990, the Postal Service has continued to provide between $2.8 million and $3.2 million a year to fund the museum’s operations, according to information provided by the USPS.

The formula for postal spending was formally established by a 2003 agreement between the USPS and the Smithsonian, according to records made available to Linn’s.

The 2003 agreement called for a six-member committee of postal and Smithsonian officials to meet quarterly to discuss the museum’s operations.

The Postal Service’s contribution for fiscal 2004 was estimated at $2.87 million but it came to $3.4 million, according to the figures given to Linn’s.

Figures were adjusted annually “depending on the needs of the museum,” according to a USPS lawyer who reviewed the records.

Gruber said in an interview that postal officials have not suggested backing out of the agreement.

“Not at all,” he said when asked if the USPS was seeking a cut in its funding of the museum.

According to the 2020 Smithsonian budget request, “The United States Postal Service provides the NPM with an annual grant, which supports more than 60 percent of the Museum’s core functions and operational costs. These costs include nonfederal salaries and benefits, facility maintenance, exhibitions, education, and collection management programs. Fundraising initiatives will continue to generate increased support from the private sector to develop and support new exhibitions, research opportunities, educational programs, and special events.”

“I would think that our partnership with USPS is extremely strong,” Gruber said.

The museum should be the site for at least one first-day ceremony a year, he said.

Private funding remains critical for some of the museum’s exhibits, Gruber said.

The William H. Gross Stamp Gallery, which he called “the finest stamp exhibition in the world,” was entirely funded by private donations, according to Gruber.

An upcoming exhibit on baseball on stamps costing $1 million is also funded by private sources, he said.

“Through stamps we can tell any story in American history,” Gruber said. “And that’s a pretty powerful place to be.”

Telling those stories arguably would have been more difficult without the support of Morison.

In the critical 1990 postal board meeting, Assistant Postmaster General Morison argued for the project, saying the USPS had big plans for supporting the museum.

He said the board’s initial investment of $15.4 million would be recovered by hosting a World Stamp Expo in fiscal 1994 “that would generate an estimated $23 million net revenue.”

Morison told the board the annual operating costs of the museum would be $3 million, with the Smithsonian Institution “continuing its current level of expenditure of about $1 million and the Postal Service guaranteeing $2 million, offset by a share of the profits from museum shops,” according to the board minutes.

He also said the museum would be seeking corporate and philanthropic funding for the facility.

Not surprisingly, the man known as “Carvin’ Marvin” who succeeded Frank as postmaster general in 1992 found the payments excessive and tried to cut the spending.

Marvin T. Runyon, who was known for his budget cutting at the Tennessee Valley Authority, quickly discovered that the Smithsonian had placed a special termination provision in the contract.

If the USPS wanted out of the agreement, it would have to pay the “actually-incurred and reasonable costs for winding down” the museum, a figure that could be in the millions.

Azeezaly Jaffer, a former postal vice president who ran the stamp program, said that Runyon “did indeed look to terminate/minimize our involvement, but the deal was set in stone and he backed off,” Jaffer said.

Gruber, who came to the museum in September 2017, said he believes the museum’s future is extremely bright.