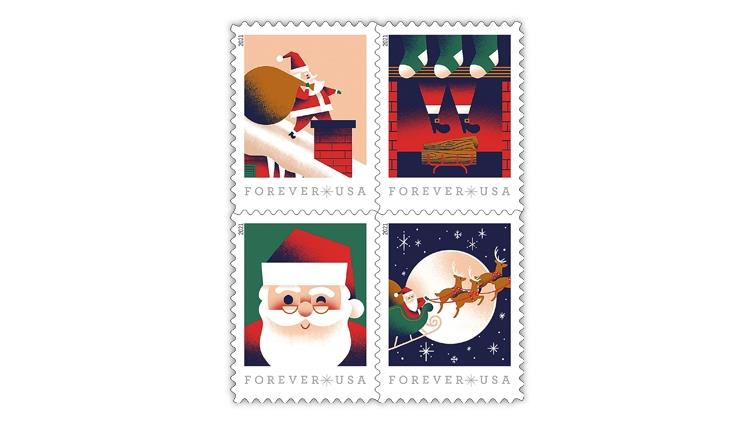 Four new U.S. forever stamps will be issued Oct. 7, in time for Christmas mailing. The set, with artwork by Brad Woodard, is titled A Visit From St. Nick. 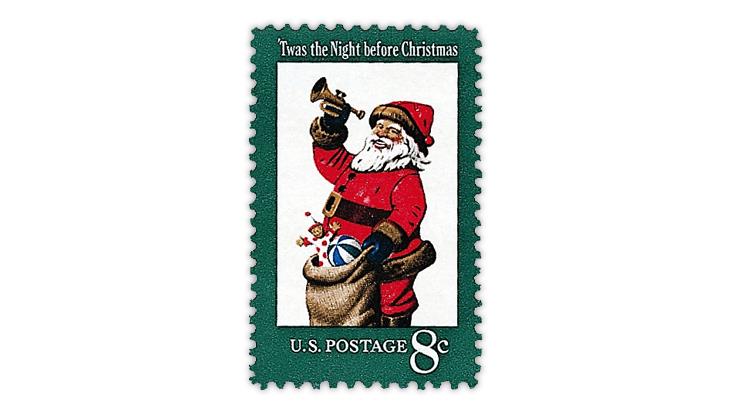 The first U.S. postage stamp depicting Santa Claus was issued in 1972. The first line of Clement Clarke Moore’s holiday poem A Visit From St. Nicholas is inscribed above the vignette. 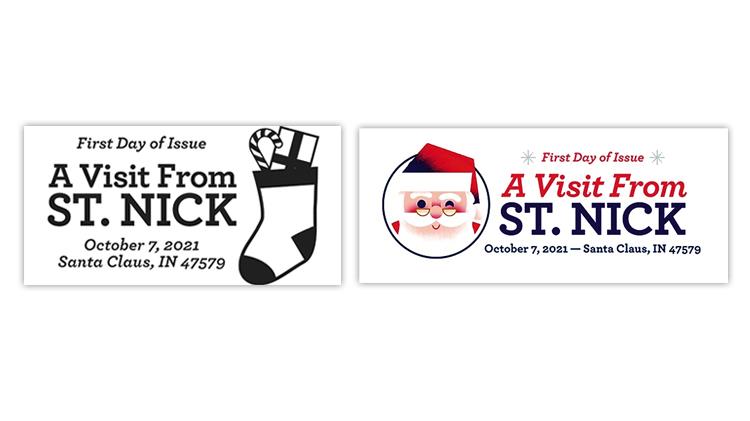 Pictorial first-day cancels for the A Visit From St. Nick set are offered in black and in color. Each has the name of the set in the postmark design.
Previous
Next

The nondenominated (58¢) forever stamps are titled A Visit From St. Nick and will be issued in a double-sided pane of 20, which the Postal Service describes as a booklet.

The stamps will be issued Oct. 7 with a first-day ceremony beginning at 11 a.m. Central Time at the Santa Claus, Ind., post office, which is located at 45 N. Kringle Place.

Advance registration for the event can be found on the USPS website. Scott Bombaugh, USPS vice president and chief technology officer, will serve as the dedicating official.

Original artwork by Brad Woodard appears on each stamp, showing St. Nick, also known as Santa Claus, in different poses as he delivers gifts on Christmas Eve to good little girls and boys.

The first stamp shows Santa on a snowy rooftop with an enormous bag of gifts slung over his shoulder, confidently stepping into a brick chimney.

A close-up of Santa’s bearded face and his stocking cap fills the image area of the third stamp. His left eye is winking as he looks over half-frame eyeglasses.

The final stamp shows Santa and the bag of gifts in his sleigh, which is being pulled across the sky by his flying reindeer. The background shows a starry night with a large full moon.

The stamp illustrations and the name of the new issue recall the popular holiday poem, A Visit from St. Nicholas, commonly known as ‘Twas the Night Before Christmas, which is the poem’s first line.

Written by Clement Clarke Moore in 1822, the poem gives reference to St. Nick and his sleigh full of toys.

“Down the chimney St. Nicholas came with a bound,” the poem relates, with “A bundle of Toys he had flung on his back.”

There is even a reference to Santa’s “wink of his eye,” and his filling of the stockings hung by the chimney with care.

“Although some of Moore’s imagery was probably borrowed from other sources, his poem helped popularize the now-familiar image of a Santa Claus who flew from house to house on Christmas Eve in ‘a miniature sleigh’ led by eight flying reindeer to leave presents for deserving children,” according to editors at History.com.

Woodard, the illustrator of this new set, is a founder and principal of the studio Brave the Woods.

His design portfolio includes a portrait of Santa that is very similar to the full face image on the third stamp in the new set.

However, the portfolio image shows Santa smoking a pipe (as described in the Moore poem), and the Postal Service has long had a policy of not depicting smoking or tobacco use on its stamp images.

The new stamps are offset-printed by Ashton Potter USA Ltd., one of the two security printers who produce postage stamps for the USPS.

The Postal Service lists a print quantity of 400 million stamps (20 million double-sided panes of 20) for this issue.

Stamps issued in double-sided panes are regularly issued in larger print quantities than standard commemoratives, and holiday stamps, which remain quite popular with mailers of Christmas cards, are printed in larger quantities still.

As an example, for the Western Wear forever stamps issued July 23 in a double-sided pane, the Postal Service reported a print quantity of 175 million stamps.

The print quantity for the Day of the Dead stamps issued in a pane of 20 on Sept. 30 was 35 million stamps.

The A Visit From St. Nick set is the only issue with a Christmas theme announced for 2021. In recent years the Postal Service has issued a Christmas stamp with religious imagery every other year, and made that stamp available for purchase during the following year’s Christmas season as well.

This new stamp set is the most recent of 30 or so U.S. postage stamps to feature Santa Claus. The first was issued 49 years ago, and also pays tribute to Moore’s poem with the inscription “‘Twas the Night before Christmas” printed across the top margin of the stamp design.

The most recent Santa Claus stamps were issued Oct. 11, 2018. The five forever stamps (four from a double-sided pane and one in a souvenir sheet) reprint classic images of Santa Claus used decades ago in Coca-Cola advertising (Scott 5332-5336).

Two pictorial first-day cancels for the A Visit From St. Nick issue have been revealed by the Postal Service. The black postmark, provided free on collector-prepared and submitted covers, shows a single stocking similar to the three hanging above the fireplace on the second stamp in the set. The postmark’s stocking is holding a wrapped gift and a candy cane. The phrase “A Visit From St. Nick” is also part of the postmark.

The color first-day cancel shows Santa’s winking face as it appears on the third stamp, enclosed within a circle. The title of the set again appears on the marking.

Both postmarks are also offered on first-day covers prepared and marketed by the Postal Service.