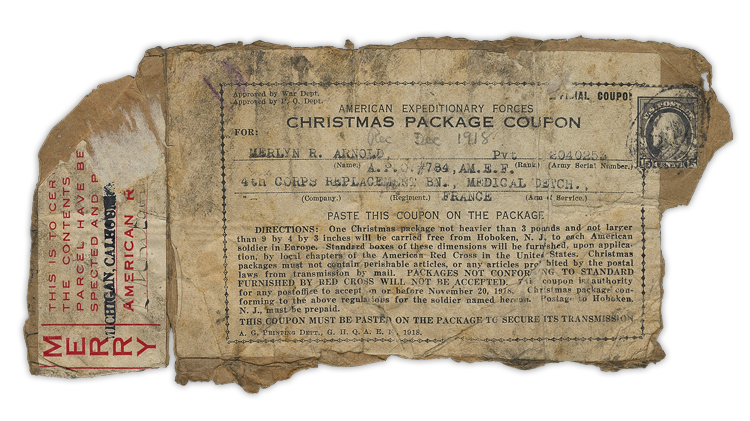 The American Expeditionary Forces “Christmas Package Coupon” was devised so that each military member still in Europe for Christmas 1918 could get one package from home for the holiday. This example was sent by an Army private, probably to a family member, who used it to send nonperishables weighing less than 3 pounds.

The War Department recognized that the United States Army soldiers fighting in France in 1918 were about to endure their second Christmas far from home. To help combat the Christmas blues, each soldier was issued one Christmas package coupon. The soldier filled in his address and sent the coupon home to someone who he thought might send him a Christmas package.

After this concept was devised and put into action, World War I came to an end on Nov. 11, so the troops still in Europe had more than one reason to celebrate.

The directions on the label say that “One Christmas package not heavier than 3 pounds and not larger than 9 by 4 by 3 inches will be carried free from Hoboken, N.J. to each American soldier in Europe. Standard boxes of these dimensions will be furnished upon application, by local chapters of the American Red Cross in the United States. Christmas packages must not contain perishable articles or any articles prohibited by the postal laws from transmission by mail. …”

The package had to be mailed by Nov. 20, 1918, and 15¢ postage to Hoboken had to be affixed. But from there, the package would be shipped free by the military.

In the case of the Christmas package coupon shown here, the package was inspected and accepted by the American Red Cross in Calhoun County, Mich., as certified by the “Merry Xmas” sticker affixed to the left.

Despite the fact that there must have been hundreds of thousands of these labels produced, this is only the second example I have seen. While it is a bit beaten up, it is still an unusual artifact of WWI.

Believe it or not: Ripley’s Christmas birth date