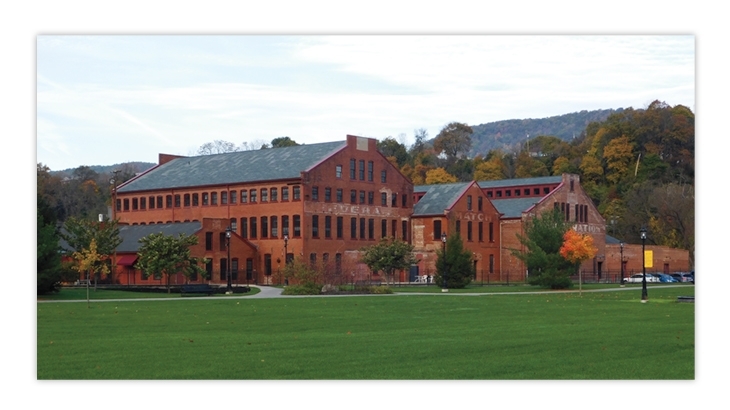 The decision was reached during an Oct. 29 joint board meeting convened online using the Zoom meeting platform.

When the complex now housing the American Philatelic Center was purchased by the library in 2002, it was a century-old collection of industrial buildings that had formerly housed a succession of match manufacturing companies before it was abandoned and fell into disrepair.

The nonprofit collector organization and its library were increasingly squeezed for space in a nearby State College, Pa., building, but the decision to purchase and renovate the Bellefonte property was not without controversy. Cost was a primary concern, and for nearly two decades the library has been paying down its mortgage while also shouldering climbing costs to repair and renovate the multiple buildings in the complex.

Some of the earliest construction projects fixed up offices that were successfully leased to tenants in the summer of 2003, providing income that would help pay down the cost of additional construction.

The APS and the APRL were able to move into the Match Factory complex in May 2004, but the facility would continue to undergo renovation for more than a decade before the project was complete.

In 2014, bolstered by a $1.3 million gift left to the society by APS member Walter Weber, who died earlier that year, the APS provided a loan to the APRL to complete work on the library’s permanent home.

The mortgage debt owed to the bank was reported to be $5 million in 2018, but when APRL life member Roger Albanese died that year he left a $1.5 million investment account to the library that was used to pay off some of the outstanding building debt.

At the Oct. 29 board meeting, executive director Scott English reported that with revenues that have recently come in, “we’ve reached the point where we’re at about $800,000, give or take, that would be required to pay off the loan.”

English said that after studying the financial situation with officers of the two boards, “we’ve reached the conclusion that we think we should recommend eliminating the mortgage debt.”

The proposal to the boards also authorized pursuing an unsecured bank line of credit of $1 million.

“The line of credit, in my view, is the ‘break glass in the case of emergency,’” English told the boards.

Paying off the existing debt would create an opportunity for the APRL to set aside money to manage and maintain the Match Factory complex, English said.

The decision by the two boards is contingent on the society receiving significant proceeds from another donated estate, which is expected to resolve by the end of this year.

The “reset” of the financial relationship between the APS and the APRL that is part of the Oct. 29 agreement would see the APS end its obligation to pay rent to the APRL for space in the Match Factory complex, currently $120,000 a year.

By agreeing to the proposal, APRL trustees also agreed to future actions that will shift library staffing costs, currently the responsibility of the APS, to the APRL.

The library trustees agreed to that part of the proposal unanimously.

Immediately after that vote was taken, the APS board unanimously agreed to the remainder of the proposal: the bank loan payment and forgiveness of the APRL loan.

The American Philatelic Center is located at 100 Match Factory Place in Bellefonte, Pa. Because of the COVID-19 pandemic, it is not currently open to visitors, but library and society services are ongoing.