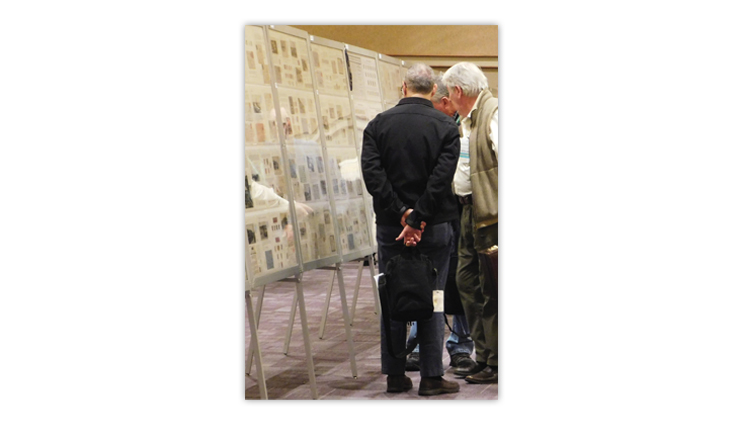 Visitors to the American Philatelic Society’s recent 2019 Ameristamp Expo in Mesa, Ariz., examine some of the show’s exhibits. The American Association of Philatelic Exhibitors will hold its annual single-frame championship competition in conjunction with

The Ameristamp Expo stamp show and exhibition held Feb. 15-17 in Mesa, Ariz., will be the last winter show by that name organized by the American Philatelic Society.

The APS has held the winter stamp show and exhibition in a different location each year, but after suffering financial losses in 13 of the previous 19 years, the APS board of directors chose last year to end its sponsorship of the annual event.

APS Stampshow, the society’s annual summer show and convention, is unaffected by the decision and continues on.

The end of APS Ameristamp Expo resulted in an immediate need to resolve two questions: What will become of the single-frame Champion of Champions competition traditionally hosted by Ameristamp Expo, and where will the APS board hold its regular winter in-person meeting and other society events?

Two different groups stepped up to answer those questions.

With the APS stepping away from Ameristamp Expo, AAPE board members met in Mesa during the February show to determine the future of the single-frame championship.

They decided to hold the competition at one of the APS national World Series of Philately qualifying shows.

The 2020 St. Louis show is scheduled to take place March 27-29 at its regular venue, the Renaissance Hotel, 9801 Natural Bridge Road in St. Louis.

Ley said that initial plans call for the single-frame championship and the popular single-frame team competition to be held in St. Louis for the next three years.

The APS, meanwhile, will follow a similar path regarding its future plans, but in a different location for 2020.

“Starting next year, the APS will have a Spring Meeting in Westpex in Burlingame, CA, scheduled for April 24-26, 2020.” That’s the word from Scott D. English, the APS executive director.

Along with the board meeting, the society will hold its general membership meeting and other society events at the Westpex show.

In an interesting twist, the APS board voted unanimously in Mesa to conduct its 2021  spring meeting at St. Louis Stamp Expo, so it looks like the APS events and the single-frame championship event will meet up again after one year apart.

Although the changes for Ameristamp Expo means one less national stamp show taking place each year, two of the show’s most important components — the single-frame championship and the APS gatherings — will continue in new locations.