An overview of the 2023 Scott U.S. Specialized catalog 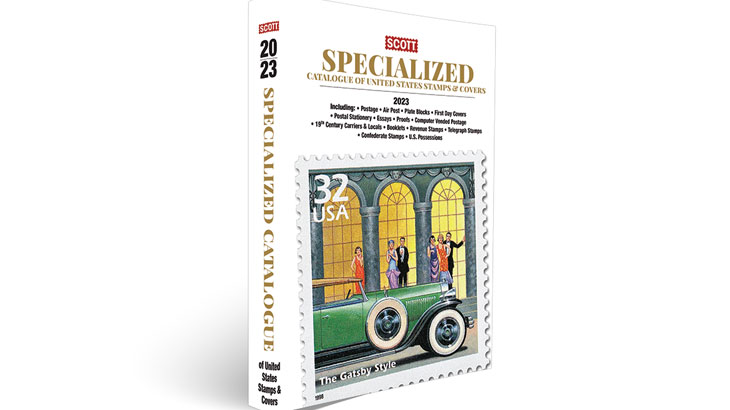 Many important value and editorial changes enhance the historic 101st edition of the Scott Specialized Catalogue of United States Stamps and Covers. Before we turn our attention to specific examples, we salute Scott editor emeritus James E. Kloetzel for working tirelessly on the thousands of value changes and hundreds of editorial changes. Kloetzel and the rest of the Scott editors have been busy adding and expanding listings and making significant improvements throughout the catalog.

Strong auction, retail and internet sales during the past year indicate that the U.S. market is strong, and catalog values well represent the market. Some values advance in certain areas of the catalog, as always, and some of these changes are discussed here.

The used 1901 2¢ Pan-American Exposition issue with center inverted (Scott 295a) drops from $55,000 to $50,000 following a poor auction realization for the finest known used example.

On the other hand, quite a few 20th-century unused coil pairs and line pairs rise in value. See especially the Scott 385-388 coils.

In 20th-century sheet stamps, the 1929 2¢ Ohio River Canalization issue in the scarce lake shade (Scott 681a) has a value added for the plate block of six, which had been valued with a dash previously. The new value is $6,000 for a never-hinged plate block. This rare item is not recorded hinged.

Values of forever stamps were also updated to reflect the new 60¢ postage rate that took effect in July.

Collectors of recent new issues will also want to pay particular attention to a number of se-tenant issues and wedding-related stamp issues of the past decade. Many saw notable increases in this edition of the catalog.

Among the back-of-the-book stamps, the stand-out section showing value increases is the Newspaper and Periodicals Stamps section. Some nice auction sales of these stamps in unused, high-quality condition caught the eyes of some serious collectors, and the spirited bidding has resulted in almost across-the-board value increases for the 1875 issues (Scott PR9-PR32 and PR36-PR50).

The Vending and Affixing Machine Perforations section was another active area for value increases and editorial enhancements. Comprehensive collections seldom are offered, but this year was an exception.

Occasional items have slipped in value, but the vast majority of the value changes made are upward, significant and seen throughout the section. Interested collectors and dealers will want to carefully review this section of the catalog this year.

The Test Stamps section sees its normal editorial and value change enhancements, with more value changes than in recent years. Here we see a mix of increases and decreases.

And for encased postage stamps, for the second year in a row, it has been possible to review new comprehensive auctions of this material, resulting in more value changes than usual, almost all of which are increases.

Many editorial improvements have been made in the 2023 Scott U.S. Specialized catalog.

Notes have been added in the Introduction concerning premiums for cancellations on classic stamps, rotary press sheet waste issues and unofficial bisects.

Many footnotes have been added or expanded to make understanding the listings and values even clearer.

Nine new earliest documented uses have been added, from Scott 153 through 554c in the Postage section and 384H in the Imperforate Flat Plate Coils section.

An important, long note has been added in the Newspaper and Periodical Stamps section concerning the so-called Colman “special printing” newspaper stamps of 1894. These stamps, though not officially issued, exist both imperforate and unofficially perforated, and they are in great demand by newspaper stamp specialists.

The note explains what they are and why they were produced, how they got into the marketplace, how to identify them and how to value them.

In the Vending and Affixing Machine Perforations section, an enormous number of additions have been made throughout the listings. This is because of the auction sale of the comprehensive Melvin Getlan collection of vending- and affixing-machine perforations. Collectors of this area will want to review these changes thoroughly, along with the revaluing of existing items.

It has been common in the last few years to see many new listings in the Essays section, and this trend seems to have even accelerated for 2023. New listings appear in some earlier issues as well as many in the modern period.

A major reworking of the 1873-76 safety paper essays has been done and should be carefully examined by collectors of this interesting area.

In proofs, standing out amidst the many additions are many major listings and new lettered minor listings for shades in the Officials section. And the Specimens section sees some rather major editorial improvements worth examining.

Finally, the Test Stamps section once again sees a thorough review, with new listings (both major and minor) and corrections based on new research. One major addition should be mentioned: the 1995 Antique Auto test stamp precursors to the issued stamps (Scott 3019-3023). These test stamps have been researched for several years, and now the extensive listings may be viewed in the 2023 Scott U.S. Specialized catalog.

However, the U.N. specialized pages will continue to remain in the Scott digital catalog subscription.