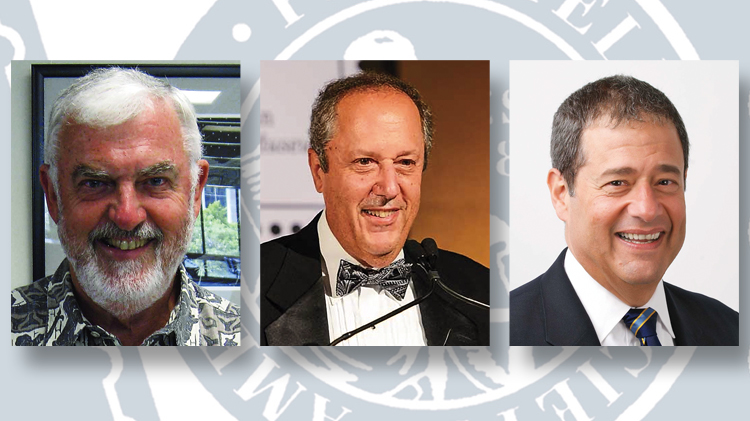 The American Philatelic Society has announced the recipients of its 2017 Luff awards.

The prestigious award is presented annually in different categories for meritorious contributions to philately by living collectors.

The award presentations are taking place during the Aug. 3-6 APS Stampshow in Richmond, Va.

Gregory is a collector and researcher of 19th-century Hawaiian stamps and postal history, and has published numerous articles on the subject.

His three-volume work Hawaii Foreign Mail to 1870 was awarded the 2012-13 Ashbrook Cup by the United States Philatelic Classics Society, earned the grand award and gold medal for literature at APS Stampshow 2012, and took large gold medals at World Stamp Expo 2013 in Melbourne, Philakorea 2014 in Seoul, and World Stamp Show-NY 2016 (with a special prize for best in show).

Praised as a work that will stand as the standard reference on Hawaiian foreign mail, the Ashbrook citation added, “In his work, Fred weaves the three complicated threads of Hawaiian history, changing transcontinental routes and shifting postal rates into a compelling story of Hawaiian postal evolution.”

Gregory’s Post Office in Paradise website, www.hawaiianstamps.com, is a bountiful reference point for any collector interested in early Hawaiian postal history, with information about the stamps, postal stationery, foreign and local mail, rates, postal markings, and much more.

Kane is the former director of the Smithsonian Institution’s National Postal Museum, a position he held from February 2002 until his retirement this year in January.

During his tenure with the museum, Kane raised $18 million to build the William H. Gross Stamp Gallery, which opened with great acclaim in September 2013, and obtained a long-term grant from the United States Postal Service to fund museum operations.

The museum, in the former City Post Office Building at 2 Massachusetts Ave. NE, in Washington, D.C., now covers 70,000 square feet with exhibits and a research center.

“Upon completion of the Gross Gallery, the historic windows with stamp images have been illuminated until midnight, and seen by Congress, local residents and millions of tourists who pass by the building on tour and Metro buses, in taxis, and as pedestrians,” the APS noted. “Truly, this is an ultimate achievement of Allen in promoting the hobby and the museum.”

Kane was formerly a corporate officer for the Postal Service involved in strategic planning, high-speed mail automation, distribution and transportation network redevelopment, and much more. He was also responsible for opening airmail facilities at the John F. Kennedy International and LaGuardia airports in New York.

He left the USPS as senior vice president for future business design.

“It’s difficult to overstate Allen’s contribution to the Smithsonian National Postal Museum and the stamp hobby,” said Donald J. Sundman, president of Mystic Stamp Co. and chair of the museum’s council of philatelists, in a recent Linn’s article by Bill McAllister.

Saadi’s long association with the APS includes service as a director-at-large, and as chair of the membership promotion and recruiting committee. After his election as chair of the APS board of vice presidents, Saadi was selected to serve as the society’s president following the death of APS president Nicholas G. Carter in 2008. Saadi was elected by members to continue his presidency in 2009 and 2011, and remained on the board as past president from 2013 to 2016.

In 2010 he was elected to sign the Roll of Distinguished Philatelists, and for his service to philately, Saadi received the 2015 Alfred F. Lichtenstein memorial award from the Collectors Club.

He led the effort to bring the 2016 U.S. international philatelic exhibition to New York City, and served as president of the successful World Stamp Show-NY 2016.

His association with the National Postal Museum includes membership on the council of philatelists and a leading role in developing the museum’s Arago online research project.

As a philatelist, Saadi specializes in the U.S. classics period and has published his research in the Chronicle, the American Philatelist, and elsewhere. He has won numerous awards for his exhibits and research, the APS notes.

“His gold medal 1847 exhibit is considered one of the finest studies in the shades and cancellations of that issue ever formed. He currently is exhibiting Struck on Stamps-1851 to 1868, a study of the evolution of early cancellations.”