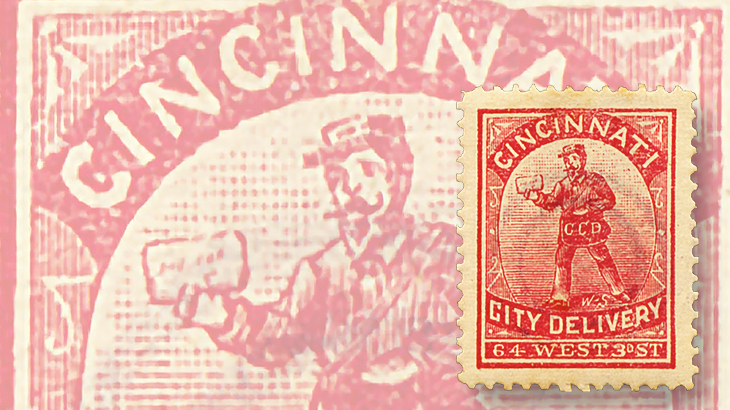 Stamps issued by local posts are a fascinating collecting specialty.

While getting deeply involved with Scott-listed local stamps will be a fairly expensive proposition, there are numerous inexpensive local stamps to look for, if you only want a sample.

One of the least expensive local post stamps with a good deal of eye appeal is the (1¢) Cincinnati City Delivery Mail Carrier stamp (Scott 39L1).

The design shows a bearded and uniformed mail carrier striding purposefully down the street with a letter in his right hand and a mail pouch  in his left.

The 2016 Scott Specialized Catalogue of United States Stamps and Covers values the stamp in unused condition at only $2.50. This is because the post was shut down the by U.S. government just a few weeks after it was established in January 1883 for violating the government’s postal monopoly.

Of the 25,000 local stamps produced, only about 5,000 were sold for postage. The remainder were sold both canceled and uncanceled to stamp collectors.

If you acquire this stamp, you won’t ever be able to sell it and retire on the proceeds. But it is some of the most fun you are likely to have for just $2.50.