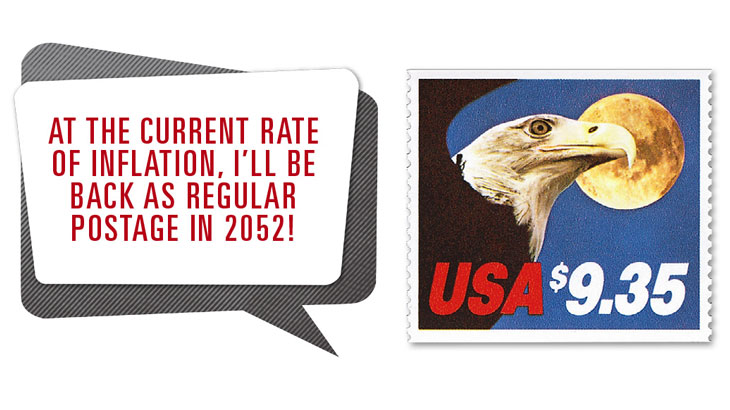 Many entries in the August cartoon caption contest noted the stern look on the face of Igor the eagle on the U.S. 1983 $9.35 Express Mail stamp (Scott 1909).

The stamp’s design suggested pop music to another group of entrants.

Dean Martin’s well-loved That’s Amore with its line, “When the moon hits your eye like a big pizza pie, that’s amore,” was one song cited by several Linn’s readers.

The other was Frank Sinatra’s version of Fly Me to the Moon.

Another major theme was captured by Dave Schwartz of Commack, N.Y., with “Hey, I’m not bald! Just a distinguished shade of brown.”

Our philatelic line winner, shown in the box on this page, is Dennis Frazee of Converse, Texas. Unfortunately, he may be an accurate prognosticator.

“If you don’t like the rate, beak to the Postmaster General,” by David Johnson of Custer, Wash.

“If I delivered coffee, would I be an Espresso Mail stamp?” Steve Kotler of San Francisco, Calif.

“We guarantee mail delivery by the next Full Moon,” sent by Bob Bialo of Cary, Ill.

“So, I’m a Canadian female with a male Russian name on a U.S. stamp. Hey USPS, how many more things can you get wrong,” from Mildred Barylski, of Warrenton, Va.

“Inflation is tough. I’ve got to get back to my nest egg,” by Jack Leonard of Hatboro, Pa.

“No longer do the ducks have anything on me,” by George Schaetzle of Sheboygan, Wis.

Thanks and a tip of the hat to all who entered. The next contest will be announced in the Oct. 10 issue of Linn’s.

Back to school for September cartoon caption contest