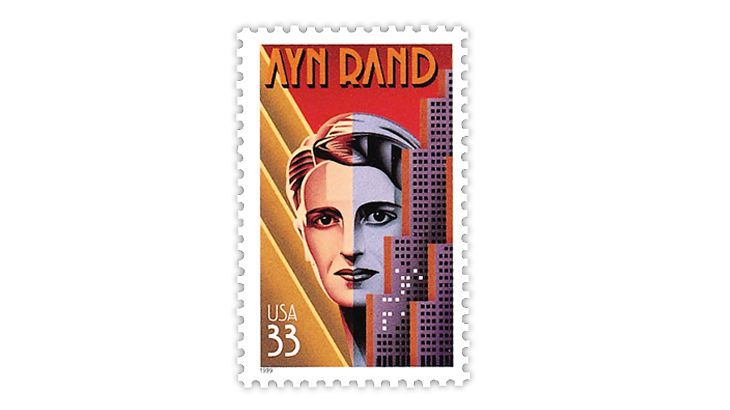 Ayn Rand (1905-1982), a Russian-born American writer and stamp collector, is honored on this United States 1999 33¢ stamp featuring an art deco approach to the subject. In a 1971 article, Rand explained why she collected stamps.

She was born Alisa Zinovyevna Rosenbaum in Russia in 1905, and her political views were shaped by the Russian Revolution. She came to the United States in 1926 to visit family in Chicago and was so taken by the experience that she resolved to stay.

The creative arts called to her, and she moved to Hollywood to pursue a career in the film industry. There she met and married aspiring actor Frank O’Connor, and in 1931 she became an American citizen.

Ultimately she gravitated to writing — screenplays for the stage and then novels.

Rand’s best-known works are The Fountainhead (1943) and Atlas Shrugged (1957), but she published other novels, essays and nonfiction.

She developed her own philosophy, that she called objectivism, which formed the backdrop of her writings. Rand’s stories were engaging and full of social and political commentary. She projected what she saw into the future and was not entirely happy with the direction society was headed.

With all this heavy thought swirling around in her head, how did Rand relax? She became a stamp collector.

She had tried it as a child, but the hobby went dormant (though she continued to accumulate stamps) as she pursued education and her dreams of becoming a writer.

The collecting spark was reignited 50 years later, as Rand explained in an article she wrote for a 1971 issue of the Minkus Stamp Journal (Vol. VI, No. 2).

In the article, which was titled “Why I Like Stamp Collecting,” Rand wrote: “About a year-and-a-half ago, I met a bright little girl named Tammy, who asked me — somewhat timidly, but very resolutely — whether I received letters from foreign countries and, if I did, would I give her the stamps. I promised to send her my duplicates. She was eleven years old, and so intensely serious about her collection that she reminded me of myself at that age.

“Once I started sorting out the stamps I had accumulated, I was hooked.

“It was an astonishing experience to find my enthusiasm returning after more than fifty years, as if there had been no interruption. Only now the feeling had the eagerness of childhood combined with the full awareness, and confidence and freedom of age.”

Rand said about the relaxing aspect of stamp collecting: “In all those years, I had never found a remedy for mental fatigue. Now, if I feel tired after a whole day of writing, I spend an hour with my stamp albums and it makes me able to resume writing for the rest of the evening. A stamp album is a miraculous brain-restorer.”

She found that for her: “The pleasure lies in a certain special way of using one’s mind. Stamp collecting is a hobby for busy, purposeful, ambitious people … because, in pattern, it has the essential elements of a career, but transposed to a dearly delimited, intensely private world.”

“A collector is not a passive spectator, but an active, purposeful agent in a cumulative drive. He cannot stand still: an album page without fresh additions becomes a reproach, an almost irresistible call to embark on a new quest.”

Rand asked, “Why not collect cigar bands, or coins, or old porcelain? Why stamps?” She answered, “Because stamps are the concrete, visible symbols of an enormous abstraction: of the communications net embracing the world.”

Finally, Rand remarked on a subject near and dear to my heart, a subject which l feel will ultimately be a major motivating force in the future as the need for stamps on mail continues to decrease: “Speaking aesthetically, I should like to mention the enormous amount of talent displayed on stamps … more than one can find in today’s art galleries. Ignoring the mug shots of some of the world’s ugliest faces (a sin of which the stamps of most countries are guilty), one finds real little masterpieces of the art of painting. … ”

As many types of art as there are to appreciate, there are people to appreciate them. Thus, stamp collections will always be our own personal art galleries. And, in addition to paintings, stamp designs today feature photography and other forms of visual expression.

Lest you misunderstand, I am not predicting the end of stamps. So long as governments find them to be a source of revenue and a method for educating and influencing their citizens and others around the world, new stamps will continue to come off the presses.

We are, however, seeing fewer stamps being printed of each new issue in this country and abroad as well.

This is thanks to the increase in electronic communication and electronic and computer-based stamp substitutes that postal authorities develop in the interests of efficiency.

And yet, despite these trends, I believe stamps will be around for a very long time.