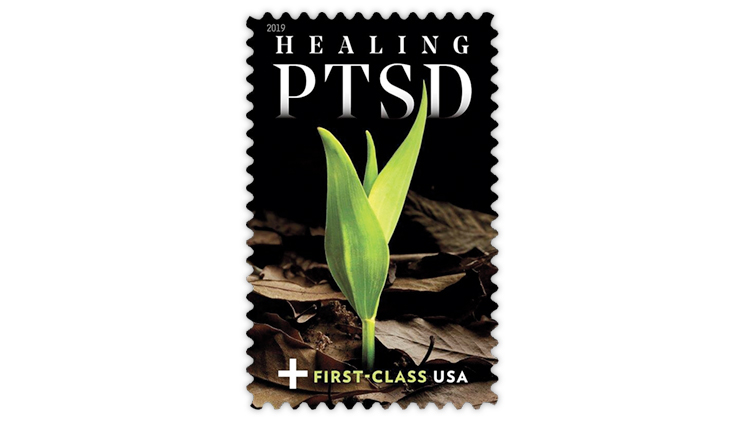 The Healing PTSD semipostal stamp was issued nationwide Dec. 2, but many customers were unable to buy the stamps at post offices because the scanned bar code would not register.

The nationwide rollout of America’s newest semipostal stamp was delayed for several hours at most of the nation’s post offices on the day the stamp was issued.

The nondenominated (55¢+10¢) Healing PTSD (post-traumatic stress disorder) semipostal was issued Dec. 2 with a first-day ceremony in Charlotte, N.C. The ceremony took place as planned, and sales of the stamp at the ceremony site were brisk.

But in post offices around the country, postal clerks were stymied by a computer-generated rejection message that appeared when the bar code printed on the back of the stamps was scanned to register the sale on the Postal Service’s retail checkout system.

Without the machinery accepting the scan, the stamps could not be sold to postal customers.

Scanning the bar code tracks stamp sales for the Postal Service, a significant detail when it comes to semipostal stamps in particular.

Though the postage rate for first-class letters is currently 55¢, the semipostals sell for 65¢, which includes a 10¢ donation earmarked as a contribution to the National Center for PTSD. The center advances clinical care for veterans and others who have experienced trauma or suffer from the disorder.

The computer glitch did not appear to affect sales of any other U.S. stamps.

Linn’s reader David Todd first contacted Linn’s editorial offices early Monday morning and described his experience when he attempted to purchase the new stamps at his local post office. The clerk told him that she was unable to sell the semipostal stamps because the transaction was being rejected by the post office’s online system.

Linn’s staff members also attempted to purchase the stamps at a local post office in Ohio with the same result.

At least a few smaller postal stations that are not linked up to the computerized retail system had the stamps on hand and were able to sell them to customers.

Postal Service officials reacted quickly to the problem, which was related to essential programming to track semipostal sales. All post offices were able to sell the stamp as of around 3:30 p.m. Eastern Time Monday, according to a Postal Service representative.

“We regret any inconvenience to customers today when trying to purchase the PTSD semipostal,” the spokesman added.