Behind-the-scenes look at the Legends of the West fiasco 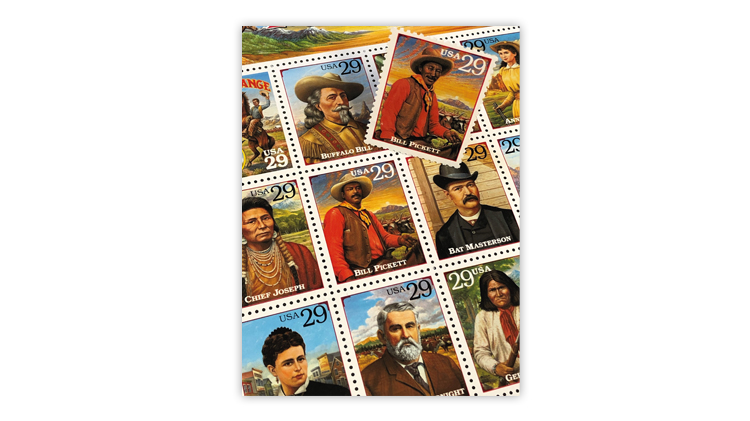 The two Legends of West stamps with the name “Bill Pickett.” The pane of stamps in the background is the one that was recalled and later released in a smaller quantity to recoup costs for printing the mistake sheets.

“It all began with a double error on the part of the Postal Service,” wrote author George Amick in the 1994 Linn’s U.S. Stamp Yearbook in the first of two chapters on the United States Legends of the West stamps of that year.

“First, on a stamp that was supposed to honor black rodeo star Bill Pickett, USPS mistakenly reproduced a picture of a man whom relatives say was Bill’s brother Ben Pickett.

“Then, before the first mistake was discovered or shortly thereafter, four post offices that had received an advance shipment of the Legends stamps sold 183 panes prematurely.”

The two chapters, covering the background of the issued stamps and then the recalled version that was sold later, took up an impressive nearly 70 pages of that yearbook.

The mistake made headlines worldwide. But there is still more to learn about that story, and Joe Brockert, who was with the USPS Stamp Services team at the time, tells it in a two-part article. The first part begins in this issue on page 12.

Brockert’s story dives into the confluence of events that led up to the perfect storm to cause all sorts of drama.

For me, the story added to my memories of when I first learned about the mistake through Linn’s Stamp News. And then further learned about the lottery where only a small number of panes from the print run would be sold to collectors. I went through all the steps, including purchasing a money order to pay for the pane, and sent it off with hopes that I would get one of the recalled panes.

Alas, it wasn’t to be and, for years, I had in my collection that returned envelope and the money order stub because I cashed it to get my funds back.

Finally, after years of waiting, I only recently acquired a pane. The Scott catalog value of a pane cooled off quite a bit from a high of around $300 at one point to its current value of $125.

So now the recalled pane, along with the normal example and my returned envelope, illustrates my own version of the Legends of the West story and make that section of my stamp album even more interesting.

Endgame in sight for the 2013 United States Jenny Invert fiasco