BIOT stamps no longer recognized by the UPU 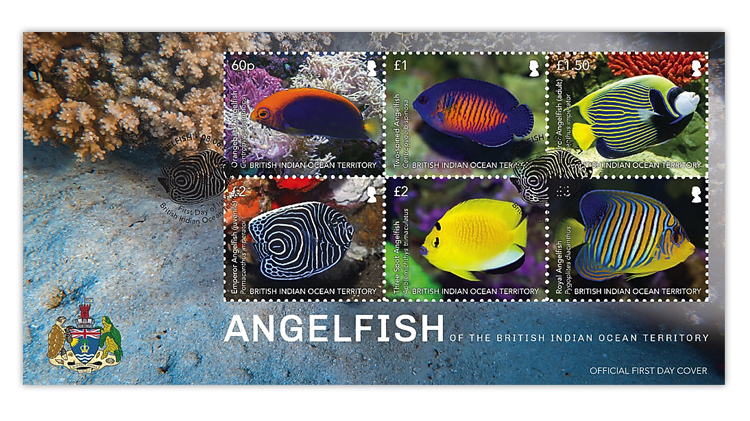 A set of six Angelfish stamps, shown here on a first-day cover, was issued June 8 for the British Indian Ocean Territory. The Universal Postal Union has since decided that stamps of the territory will no longer be recognized.

The Universal Postal Union has officially decided that stamps of the British Indian Ocean Territory will no longer be recognized.

The decision was made Aug. 24 at the UPU’s 27th Universal Postal Congress in Abidjan, Ivory Coast. The congress took place Aug. 9-27.

As reported in an article in the June 14 issue of Linn’s, the postage stamps were part of the sovereignty dispute between the United Kingdom and Mauritius over this archipelago of more than 50 islands in the central Indian Ocean, also known as the Chagos Islands or Chagos Archipelago.

The United Nations and its International Court of Justice are among the international bodies that have upheld Mauritius’ claim to the islands. The UPU is the specialized U.N. agency that deals with postal matters.

In an Aug. 27 press release, the UPU said that it “has formally acknowledged the Chagos Archipelago as an integral part of the territory of Mauritius.”

The press release also said that “as a result of the decision, the UPU will no longer register, distribute or forward postage stamps issued by the “British Indian Ocean Territory.”

The decision passed with 77 votes, with six votes against it and 41 abstentions, according to the press release.

An article posted Aug. 25 on the BBC News website said that all mail “from the Chagos Islands must now bear stamps from Mauritius.”

Various other news reports have quoted Mauritius Prime Minister Pravind Jugnauth as saying about the UPU decision, “This is another big step in favour of the recognition of the sovereignty of Mauritius over the Chagos.”

The first stamps for the British Indian Ocean Territory were issued in January 1968, less than three years after it was established as a British overseas territory on Nov. 8, 1965. What may likely be the territory’s last stamps were released June 8. This set of six se-tenant (side-by-side) stamps features angelfish.

A first-day cover of the new stamps is pictured on the website of the British Indian Ocean Territory Administration.

According to that website, “There is no permanent population in BIOT, but Diego Garcia, the largest of the 58 islands hosts a joint UK-US military facility.”