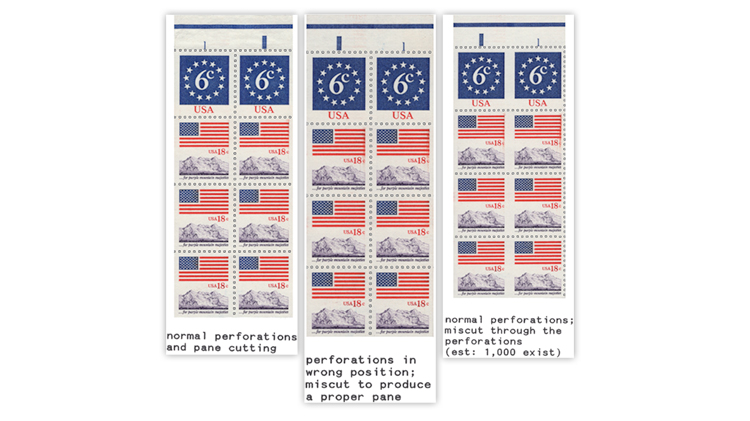 Three examples of the 1981 Flag and Anthem booklet pane with plate numbers are shown. On the left is a pane with plate number 1 in the normal position and the length register mark over the second vertical row. The center pane is an error, with the perforations shifted one full vertical row, yet the slicing into panes has created a normal-looking pane. The pane on the right is a Scott-listed error with shifted perforations and a miscut creating vertically imperf between horizontal pairs. The problems were caused by the machines misreading the plate number “1” as a length register mark.

When the Bureau of Engraving and Printing decided to add plate numbers to United States coil stamps in 1981, it also undertook to add them to booklet panes. An early effort turned out to be an object lesson.

The height of the plate number became a problem when perforating and slicing into the panes took place. The machine was supposed to read the length register mark — the vertical bar over one of the 6¢ stamps — in order to place the perforations correctly and slice the booklet panes through the imperforate margin.

When the reader mistook the “1” plate number for the length register mark, two possible varieties resulted. They also are shown here. The normal pane as intended is at left.

The pane on the right is a Scott-listed error, 1893b, priced at $60 in the 2022 Scott Specialized Catalogue of United States Stamps and Covers. The perfs are shifted by one vertical row and the slicing is also wrong, such that the horizontal pairs are imperf between. As the catalog value indicates, this error is not rare. It is estimated that more than 1,000 exist.

Shown in the center is a pane that also is an error, but one that Scott does not list. Note that the length register mark is over the left column instead of the right, where it was intended to be.

As with the Scott-listed error pane pictured here, the perforations are shifted by one vertical row, but the slicing has created a normal-looking pane until you look at the margin. But because the stamps are usable, Scott has ignored this error.