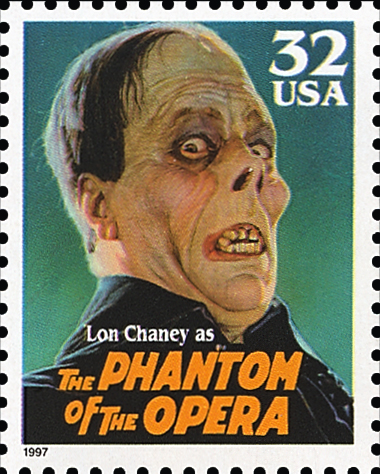 Lon Chaney, born April 1, 1883, has appeared on two United States stamps. This second issue, from 1997, shows the actor in his film role as the Phantom of the Opera.

Stage and screen actor Leonidas Frank "Lon" Chaney was born April 1, 1883, in Colorado Springs, Colo. As a vaudeville and theater actor he married Cleva Creighton, and they had one son, Creighton Tull Chaney, who later took the stage name Lon Chaney Jr.

The couple divorced in 1913, and Creighton was raised by his father and his second wife, Hazel Hastings

Father and son are both featured on separate stamps in the 32¢ Classic Movie Monsters set issued Sept. 30, 1997.

Lon Chaney Sr. appears on his stamp (Scott 3168) in the title role of The Phantom of the Opera, a 1925 film about a mysterious disfigured musician who lives in catacombs beneath the Paris Opera House.

Chaney created his own makeup for the role of the Phantom; he was known as "The Man of a Thousand Faces" for his skill at dramatically transforming his appearance through the application of makeup.

It is estimated that during his film career he appeared in more than 150 features.

Just three years before the Classic Movie Monsters stamp was issued, Lon Chaney was commemorated on a 29¢ stamp in the Silent Screen Stars issue (Scott 2822), with artwork by Al Hirschfeld. He was depicted in the title role of the 1923 film, The Hunchback of Notre Dame.