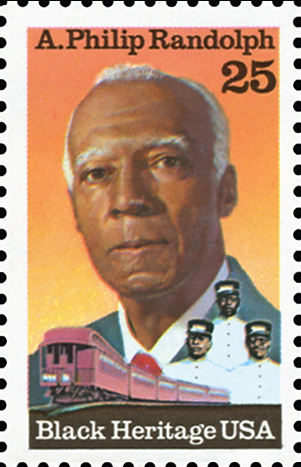 The 25¢ stamp honoring A. Philip Randolph, who was born April 15, 1889, in Crescent City, Fla., is the 12th issue in the Black Heritage commemorative series. The stamp (Scott 2402) honors Randolph as a spokesman for minority labor and a prominent civil rights activist.

It was issued in 1989, Randolph's centenary year, though the issue date was Feb. 3, to correspond with Black History month in February.

Asa Philip Randolph was the son of an African Methodist Episcopal minister. In 1917, with Chandler Owen, Randolph founded The Messenger, a magazine of African-American literature and political commentary.

His labor activities included many years organizing and leading the Brotherhood of Sleeping Car Porters, a struggle that resulted in an agreement signed by the Pullman company and the union in 1937. Randolph was later named vice president of the AFL-CIO.

Randolph received the NAACP Spingarn Medal in 1942, and the Presidential Medal of Freedom in 1964.

The A. Philip Randolph stamp was designed by Thomas Blackshear, whose illustration of Randolph also includes a train of Pullman cars and three sleeping car porters in white jackets.