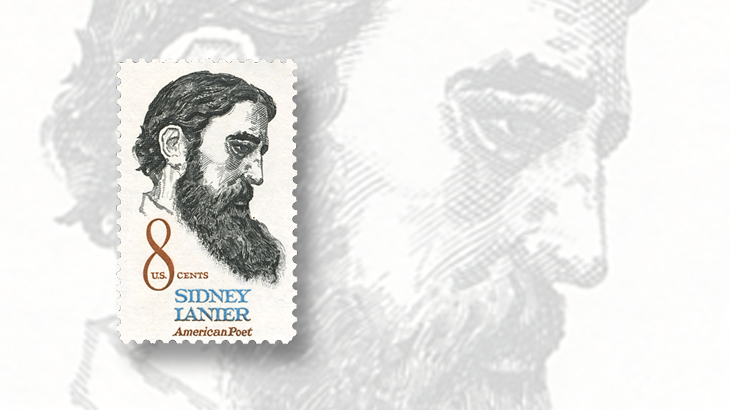 An 8¢ stamp honoring poet Sidney Lanier was issued on his birth anniversary in 1972.

Identified most frequently as an accomplished poet of the American South, Sidney Lanier was also a novelist, a musician and music theorist, a teacher, a lawyer, an essayist and, for a period of one year, a postal clerk in Macon, Ga. All of this and more he accomplished in a lifetime of fewer than 40 years.

He was born in Macon on Feb. 3, 1842, and attended Oglethorpe University, graduating in 1860. With the onset of the Civil War, Lanier served in the Confederate Army as a pilot on a blockade runner. Captured in 1864, he contracted tuberculosis while imprisoned; the effects of the disease would eventually cause his early death.

After the war Lanier took on various jobs while composing poetry and writing his only novel, Tiger Lilies (1867). Some of his poetry included Southern dialect and spoke of natural settings in the South.

In the 1870s Lanier moved to Baltimore where he lectured at Johns Hopkins University and was first flautist with the Peabody Institute Orchestra. His new poems were published in magazines, and during this time he wrote some of his most famous verses, including The Marshes of Glynn in 1878, and Sunrise in 1880.