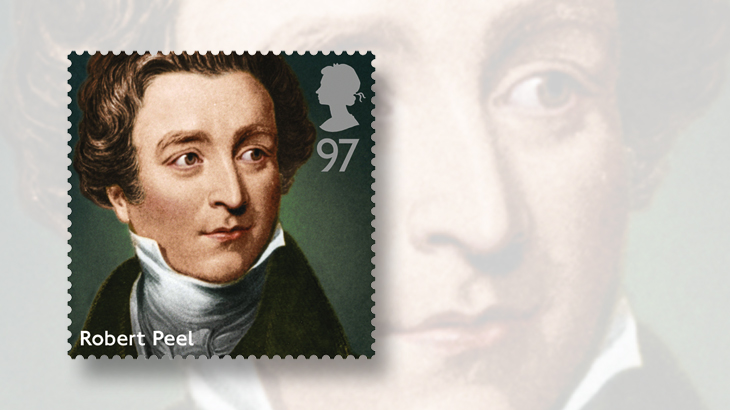 Prime Minister Robert Peel of the United Kingdom, on a 97-penny stamp issued in 2014.

Peel was born Feb. 5, 1788, in Bury, Lancashire, the son of a wealthy industrialist who would become a member of Parliament soon after the birth of his son.

Like his father, the younger Peel would serve in Parliament as a member of the Tory Party. As Home Secretary in 1822, he reformed the kingdom’s system of criminal law and established the metropolitan police force. These British police officers to this day are known as “bobbies,” a nickname derived from Peel’s first name.

With the 1834 Tamworth Manifesto, Peel began a process that would lead to the creation of the Conservative Party.

As prime minister, Peel reintroduced the income tax to counter a budget deficit, and supported new laws that limited work in factories and mines by women and children. During the start of the Irish famine in 1845, he successfully led the repeal of the Corn Laws that had limited food imports by applying high tariffs and legal restrictions.

Faced with continuing political opposition, Peel resigned his position in 1846.