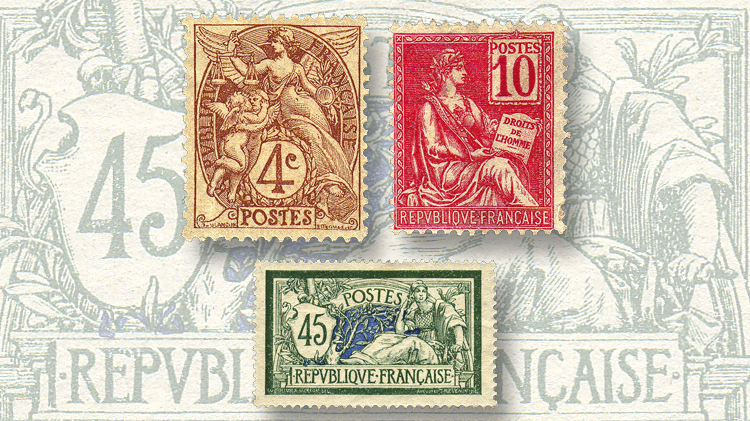 France issued three new series of stamps in 1900, but all proved unpopular. Shown here is the 4-centime Blanc design (Scott 112) used for low denominations, the 10c original Mouchon design (116) used for the middle denominations, and the 45c Merson design 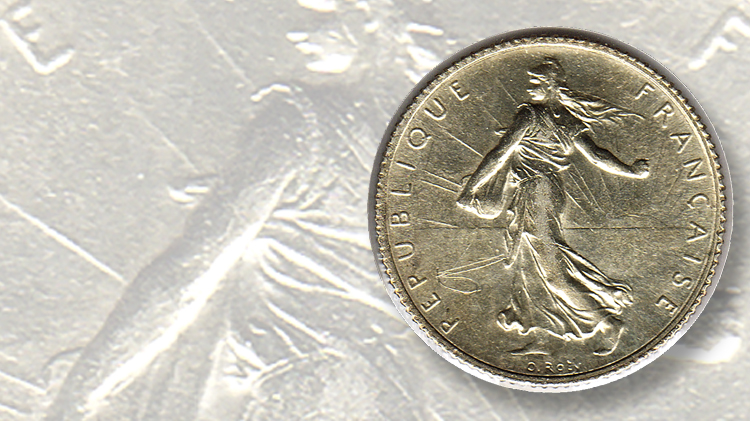 The Sower, seen here on the reverse of a 1-franc coin, was a popular symbol of France in the late 19th and early 20th centuries. In use on coins since 1897, the Sower was adapted to use on stamps in 1903. The name of the designer, O. Roty, appears below t 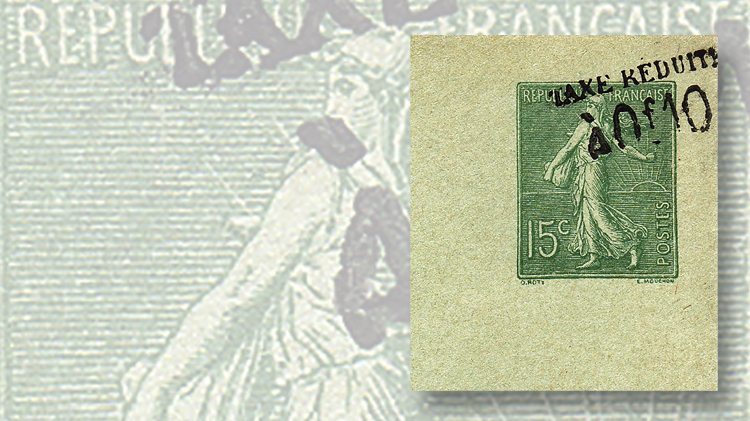 This cropped image of a prestamped envelope shows the surcharge applied to reduce the postage from 15 centimes to 10c, the new lower letter rate. The surcharge reads, “Rate reduced to 0.10 francs.” 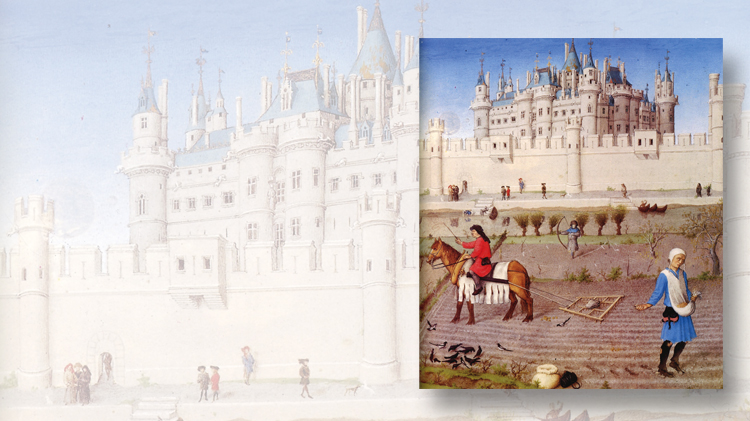 Roty’s medallion design was probably based on this illustration from the famous medieval prayer book Les Tres Riches Heures du Duc de Berry (The Very Rich Hours of the Duke of Berry). 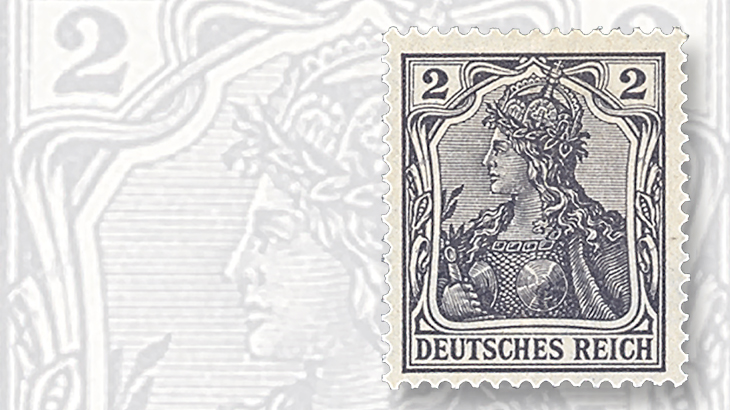 At the time the Sower design was introduced in France, German stamps featured the warlike Germania, as shown on this 2-pfennig denomination (Scott 65C). 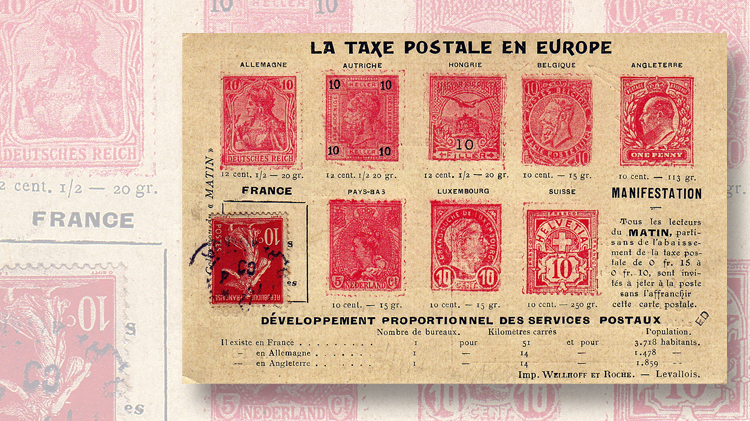 A French newspaper created this postcard for its readers to petition the government for a lower postage rate. It shows the current letter-rate stamps of eight neighboring countries and their equivalent face values in French currency. All are less expensiv 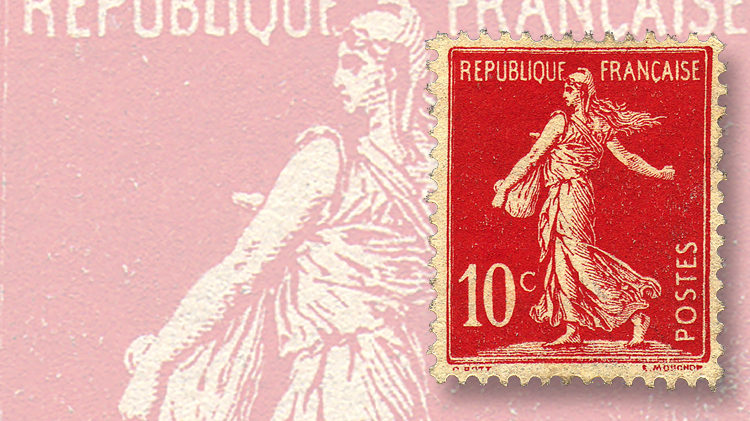 Responding to complaints about the lined Sower design, France introduced the cameo Sower design with no sun or horizon and a solid background. The first issue, with the Sower standing on ground, met with further criticism and was soon followed by a revise 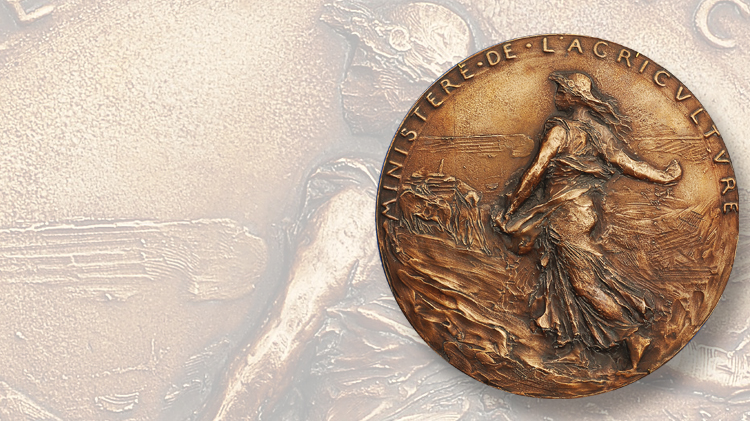 Louis-Oscar Roty based his Sower coin design on this medallion he had designed for the Ministry of Agriculture in 1886. 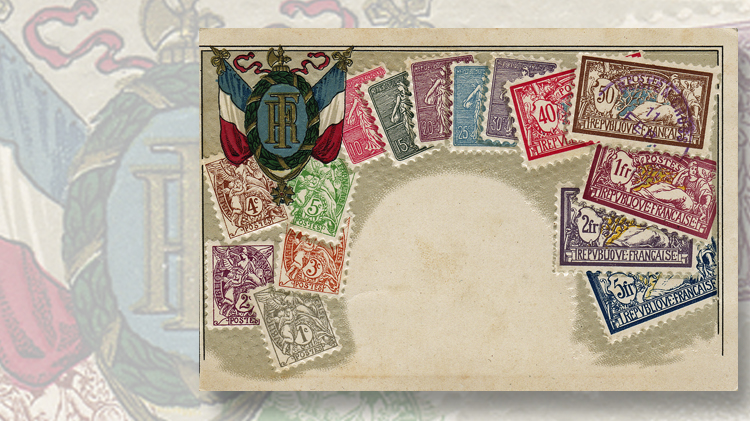 This postcard shows the range of French stamps available after all the lined Sowers were introduced in 1903. A similar card exists showing Great Britain stamps of the same time period. 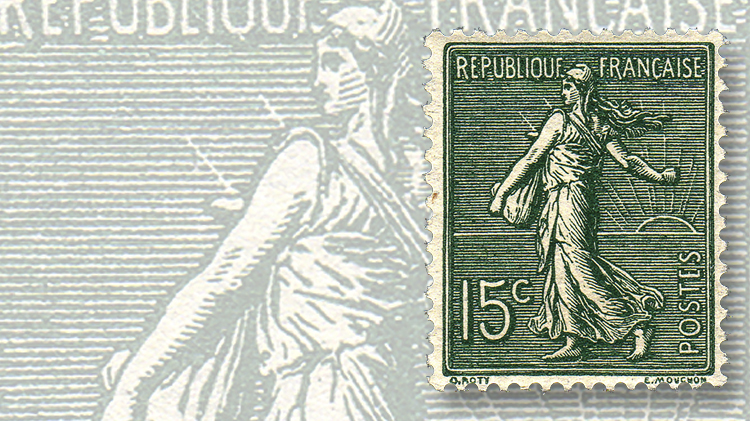 The 15-centime slate-green Sower (Scott 139) was the first to be issued. The name of the designer, O. Roty, is at bottom left, and the engraver, E. Mouchon, is identified at lower right. 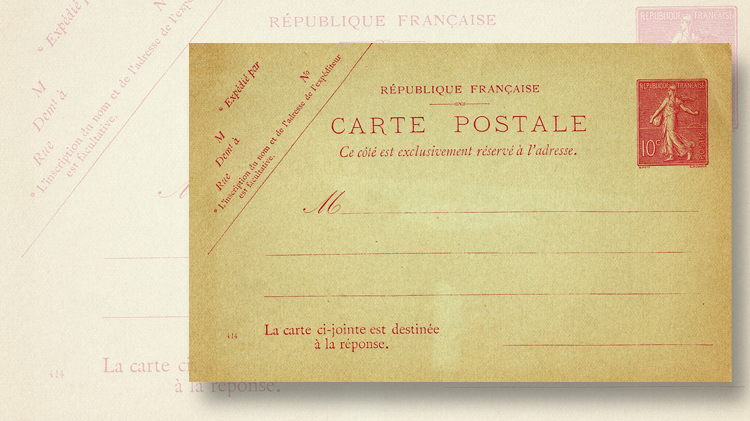 The lined Sower design was used for this 10-centime postal card. The inscription at lower left (“The attached card is intended for the response”) indicates that a second 10c card is attached behind this one. 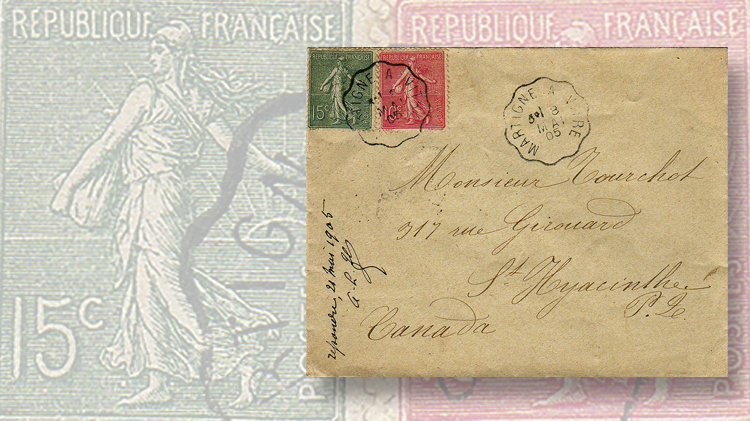 The sender used the 10-centime and 15c lined Sowers on this letter to Canada to pay the overseas rate. The cover was mailed May 8, 1905, and received May 20, according to the backstamp (not shown).
Previous
Next

Philately of France — By Larry Rosenblum

France welcomed the 20th century with three new stamp designs. All proved to be unpopular.

The low denominations, designed by Paul Joseph Blanc, featured a winged female symbol of France holding the scales of justice. The middle denominations, by Louis-Eugene Mouchon, had a seated woman in Roman attire holding the French bill of rights. The bicolored high denominations, by Olivier Merson, showed a peaceful woman, though with a sword at hand, sitting near an olive tree.

The Mouchon design was immediately criticized, and a revised version issued in 1902 did not increase its popularity. The other two were also not well-liked. The story of these three groups of stamps was told in a previous column (Linn’s, April 18, 2016, page 30).

Desiring to find a symbol of the Third Republic that the public would like, M. Alexandre Berard, the minister for posts and telegraphs, decided to use an existing one.

La Semeuse (the Sower), designed by sculptor Louis-Oscar Roty, was a female symbol of the Republic proudly sowing French ideals and delivering a message of peace. The Sower had been in use on silver coins since 1897.

Roty based the coin design on a medallion he had designed in 1895, and it, in turn, was probably based on an image in the famous early 15th-century book of hours (prayer book), Les Tres Riches Heures du Duc de Berry (The Very Rich Hours of the Duke of Berry).

In the image, a dour peasant is sowing seeds, another on horseback is pulling a harrow to cover the seeds, and a third toward the back is (unsuccessfully) trying to use a bow and arrow to chase the birds away. In the background is the royal Palace of the Louvre.

In 1902 Roty made a plaster cast of his design for the stamp: the Sower with the rising sun behind her, the denomination at lower left, “POSTES” vertically at lower right, and “REPUBLIQUE FRANCAISE” across the top. The background was lined to emphasize the form of the Sower in relief.

Mouchon, already a well-established stamp engraver, created a copper die for printing. His first attempt was engraved too finely to be reproduced satisfactorily, so a second had to be made.

Color trials were produced, and a gray-green color was selected for the first denomination, 15 centimes paying the domestic letter rate for letters up to 15 grams.

The first lined Sower (Scott 139) was issued April 2, 1903, to immediate acclaim. A Paris newspaper wrote, “The picture which will embellish our future stamps will be no less than the noble, exquisite figure which already lends an artistic value to our coins … finally giving us the ideal model, delicious and symbolic, which will spread and popularize throughout the world the artistic taste of our nation.”

Others contrasted the peaceful Sower with the warlike Germania who appeared on German stamps at the same time. The Sower wears the Phrygian bonnet, a symbol of liberty, and fosters life by working to feed the people; Germania, clad in armor, is ready to sow death and destruction.

During the next three months, additional denominations were issued until all the revised Mouchon-designed middle denominations (Scott 133-137) were replaced: 25c dull blue (Scott 141) on April 28 for foreign letters weighing up to 15 grams; 10c rose (138) on May 6 for domestic, colonies, and foreign postal cards; 20c violet-brown (140) on June 29 for heavy printed matter and merchant’s samples; and 30c violet (142) on June 29 for double-weight domestic letters.

As with most French stamps until then, the early Sowers were printed by sheet-fed, flat-plate typography (also referred to as surface printing).

Booklets of 20 (two panes of 10) of the 15c were issued. Ten-centime postal cards and 15c and 25c envelopes were also issued.

The 15 currently available stamps after the lined Sowers were introduced are pictured on a postcard illustrated with this column.

Although the Sower design was generally praised, there were criticisms. Some complained that the woman was sowing into the wind (although this was sometimes done intentionally).

Others said her back should not be in shadow when the sun is behind her. This is easily explained, because Mouchon engraved the die from the plaster cast that was lit from the left.

Some patriots wanted to see a more militant figure, such as Joan of Arc, who had helped the French defeat the English during the Hundred Years War in the 15th century.

More valid, however, were comments that the lined background made the image, lettering, and denomination hard to see.

Minister Berard asked Mouchon to make changes in the design to counter some of these criticisms. Mouchon started work later in 1903.

He also developed a significantly different design in which the sun was in front of the Sower standing on a rolling landscape (answering the critics of the shadow). The background above the landscape was white.

By early 1906, the mound of earth and landscape designs had been developed into essays with plates of 50 subjects in two panes of 25 stamps each.

Then events caught up with Berard.

The government had been under heavy pressure to reduce the postage rate. The newspaper Le Matin (The Morning) created a postcard that featured the letter rate stamps of other European countries and the equivalent of each denomination in French currency. The eight stamps shown all had denominations of 10 centimes or 12c, compared to France’s basic letter rate of 15c.

Because postcards could be sent to the president of the Chamber of Deputies (the lower house of the French Parliament) for free, readers must have sent many of them.

The government passed a law March 6, 1906, that reduced the rate for domestic letters from 15c to 10c effective April 13 of that year. The postcard rate of 10c remained unchanged.

Berard decided that a different Sower design should be issued for the new rate. There was no time for Mouchon to create a brand new design, so one of the two existing essays had to be used.

The one with the solid background and the Sower standing on ground was chosen and issued on the date the lower rate took effect.

Sowers with the solid background are referred to as “cameo Sowers” to distinguish them from “lined Sowers.”

The overall design was finally satisfactory, but adjustments still needed to be made.

Some critics said the Sower appeared to be “perched on a pedestal.” Others, noticing that the Sower had been shortened by about one millimeter, said she looked chubby.

Berard put Mouchon to work again to revise the design further. What turned out to be the final Sower design first appeared several months later.

The 10c Sower that had been issued in April was the only one with the mound of earth and is known as the “cameo Sower on ground.”

The story of the final Sower design and the many Sower issues of the next several decades will be told in the next Philately of France column.