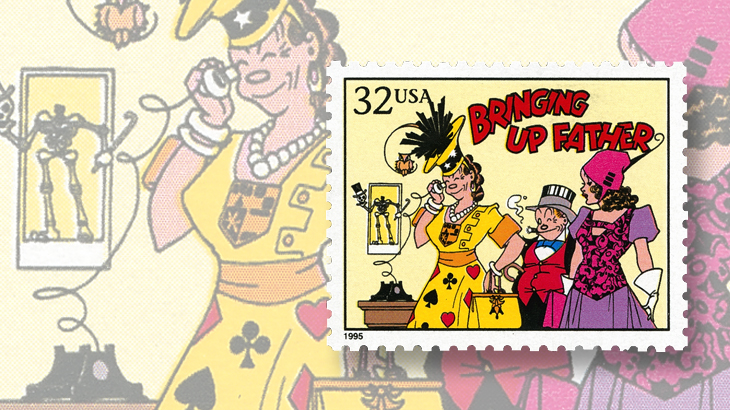 Maggie (left) and Jiggs (center) are shown with their daughter Nora (right) on the 32¢ stamp commemorating the Bringing Up Father comic strip by George McManus.

The American comic strip Bringing Up Father was created by George McManus, who was born Jan. 23, 1884, in St. Louis, Mo.

When the set of 20 Comic Strip Classics stamps was issued Oct. 1, 1995, one of the 32¢ stamps paid tribute to Bringing Up Father, featuring three of the main characters (Scott 3000d).

On the back of the stamp is printed the following text: “Bringing Up Father, George McManus (1884-1954). Also known as Maggie & Jiggs, this was the story of a nouveau riche Irish immigrant and his social climbing wife. Jiggs’ habit of escaping from Maggie’s fancy parties to eat corned beef and cabbage popularized this dish. The strip began in 1913.”

The popular comic strip ran in some 750 newspapers during its heyday, and illustrations of the three main characters (Jiggs, Maggie and their daughter Nora) appeared on all sorts of trinkets and souvenirs.

Like his characters, McManus came from an Irish background, the son of an opera house manager. His first drawings appeared in the St. Louis Republic while he was still in his teens. In 1903, he moved to New York City and found work creating comic strips for the New York World, and later, the New York American, where Bringing Up Father debuted.

McManus gladly acknowledged that he was his own model for the character of Jiggs. McManus died in 1954, but the comic strip continued under other writers and artists until 2000, making it the longest-running comic strip in history.