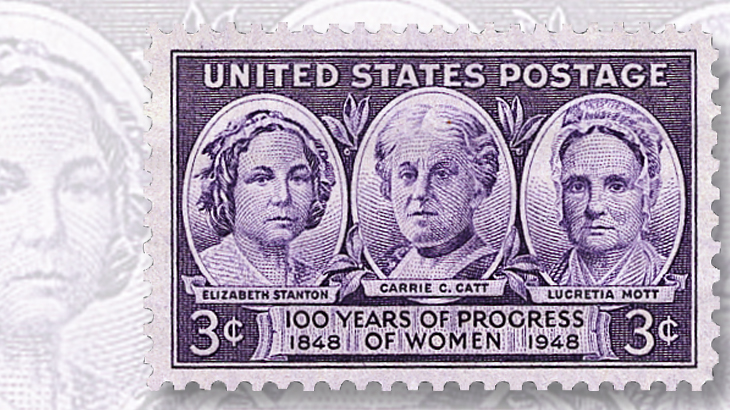 Carrie Chapman Catt is depicted in the center of this 3¢ stamp from 1948 celebrating a century of progress for American women.

Three women are depicted on the purple stamp: Elizabeth Cady Stanton at left and Lucretia Mott at right were the organizers of the 1848 convention.

In the center is a portrait of Carrie Chapman Catt, the prominent women’s suffrage leader who was born Carrie Clinton Lane in Ripon, Wis., on Jan. 9, 1859.

After graduating from Iowa State Agricultural College (now Iowa State University) in 1880, Catt became a teacher and school superintendent before working as a newspaper writer in San Francisco.

Her involvement in the suffrage movement and her efforts to secure voting rights for women brought her into contact with Susan B. Anthony, who chose Catt to succeed her as president of the National American Woman Suffrage Association.

When her goal was reached with the passage of the 19th Amendment, Catt founded the League of Women Voters, and continued to work in the international women’s suffrage movement and with groups opposing war and child labor. She died on March 9, 1947.