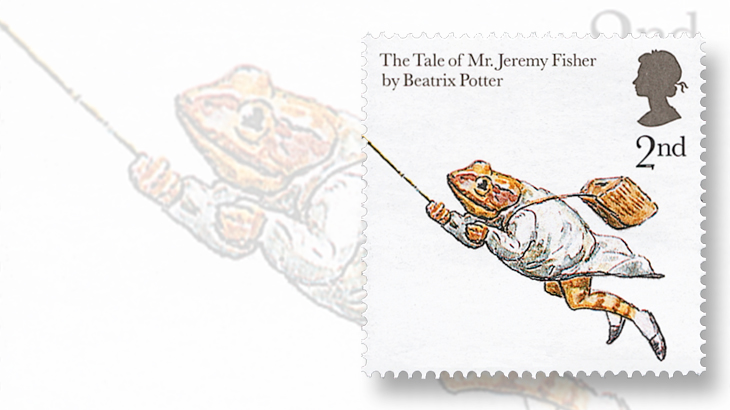 Beatrix Potter was honored on a stamp for second-class mail issued by Great Britain in 2006.

July 28 marks the 150th birth anniversary of famed children’s author and artist Beatrix Potter, who in 1866 was born on that date in South Kensington, London, England.

Potter’s many famous animal characters include Peter Rabbit, Jemimah Puddle-Duck, Squirrel Nutkin and others. Great Britain has already issued a number of stamps honoring Potter by depicting her appealing characters, including the frog Mr. Jeremy Fisher on a second-class stamp issued in 2006 (Scott 2334).

The characters populating Potter’s little books are often based on pets she had as a youngster, when she first began displaying her talent for art.

Her animal tales evolved out of letters she wrote to young friends, and in 1901 she privately printed her illustrated story The Tale of Peter Rabbit. A commercial edition was published the following year, and the success of the little book led to a series of follow-up volumes that remain popular today.

To commemorate the 150th birth anniversary, Great Britain’s Royal Mail is issuing a set of six new stamps on July 28, with each stamp showing one of Potter’s beloved characters.