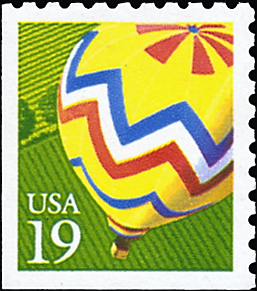 What Ed Yost invented in 1960 has already been featured on three United States stamps, and on stamps issued by other countries.

Yost, who was born June 30, 1919, is well known as "the father of hot-air ballooning" for his pioneering use of propane to heat the air that carries a manned balloon aloft.

While manned balloon flights had taken place as early as 1783, Yost's inventions and refinements resulted in the hot-air balloon that could be used for human transportation and which led to an industry supporting ballooning as a sport. He invented essential equipment for the balloonist, and was himself a ballooning adventurer recognized for his record-setting feats, including being the first (along with Don Piccard) to cross the English Channel in a hot-air balloon.

Yost died May 27, 2007, long after the three U.S. stamps honoring hot-air ballooning were issued. The first two are part of a set of four 20¢ stamps from 1983 that also celebrate the gas-filled Civil War balloon Intrepid and the 1935 hydrogen-filled Explorer II balloon (Scott 2032-2035).