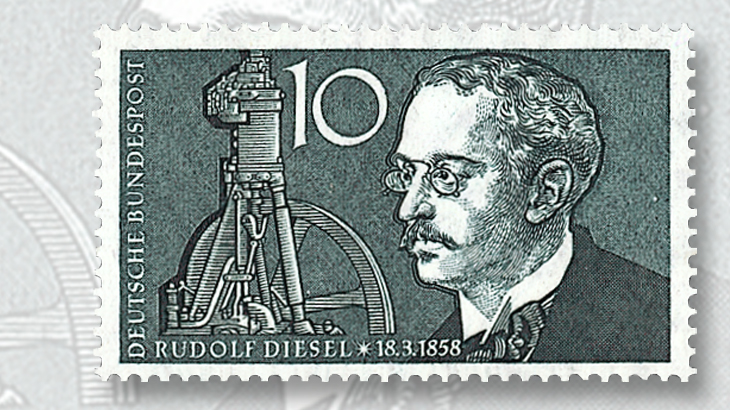 Mechanical engineer Rudolf Christian Karl Diesel, whose name is permanently connected with the internal combustion engine he developed and refined in 1897, was born March 18, 1858, in Paris, France, the son of Germans from Bavaria. The family moved to London, England, but Rudolf was sent to Bavaria at age 12 to complete his schooling while living with relatives.

He later studied at the Royal Bavarian Polytechnic of Munich, graduating in 1880, and was employed by the famous Krupp firm while working on the problem of a new engine. His technical advances led to patents obtained in 1897 and a successful engine demonstration that same year.

The efficient new engine was quickly put to use powering trains, automobiles, factories, pipelines and more.

Diesel profited from his success, but died under mysterious circumstances in 1913 while traveling on a post office steamer headed from Antwerp to London. He disappeared during the night, and is believed to have drowned. Various clues point to death by suicide, but some theories have suggested foul play brought about Diesel’s demise.

Diesel has been honored on numerous stamps issued by countries worldwide. Germany honored the inventor on a 10-pfennig stamp issued on the 100th anniversary of his birth: March 18, 1958 (Scott 783). He is also depicted on a German 300pf stamp issued in 1997 to commemorate the centenary of the diesel engine (1977).