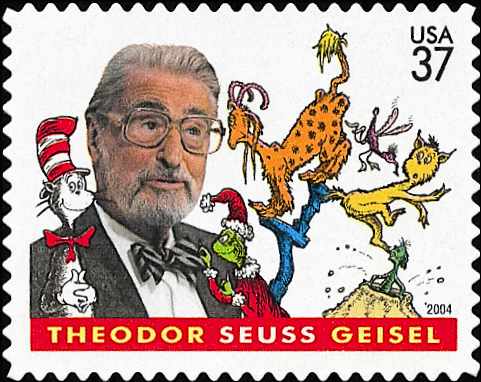 On March 2, 2004, the United States Postal Service issued a 37¢ stamp honoring one of the country's most famous authors, Theodor Seuss Geisel — known to children of all ages as Dr. Seuss. The occasion was Geisel's 100th birthday: he was born March 2, 1904.

The first stamp, a 33¢ issue from the Celebrate the Century series, shows one of the most famous Seuss characters, the Cat in the Hat, from the 1957 book of the same name (Scott 3187h).

The 2004 stamp picturing the author began with an Associated Press photograph from 1987, but stamp designer Carl Herrman added six Seuss characters from four books: the Cat in the Hat, the Grinch, the Glotz (from the 1979 story Oh Say Can You Say?), and three characters from the 1965 tale I Had Trouble in Getting to Solla Sollew — the Skritz, the young fellow, and the Skrink.

The pane of 20 self-adhesive stamps also features the five fish depicted on the cover of One Fish Two Fish Red Fish Blue Fish in the pane margin.