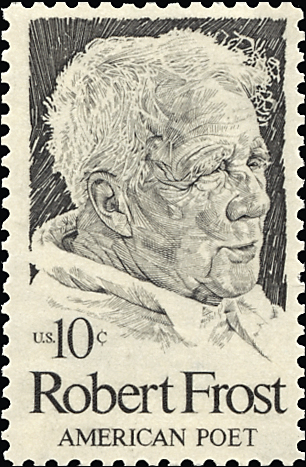 The celebrated American poet Robert Frost was born March 26, 1874, in San Francisco. At age 11 he moved with his mother and sister to Lawrence, Mass., following the death of his father, a journalist, from tuberculosis.

As a young married man he taught school and tended a small farm in Derry, N.H., while writing verse which, when submitted to The Atlantic Monthly, was returned with brief note advising, ""We regret that The Atlantic has no place for your vigorous verse."

Discouraged, Frost moved with his family to England, where his poems about New England found a more welcoming reception. He was championed by Ezra Pound, and his reputation as an accomplished traditional poet grew as he returned to the United States.

He won the Pulitzer Prize four times, and in 1958 was appointed to be the consultant in poetry to the Library of Congress. He was awarded the Congressional gold medal in 1960, and was asked to read a poem at the inauguration of President John F. Kennedy in 1961.

A 10¢ stamp honoring Frost was issued on his birth centennial, March 26, 1974, in Derry. The pencil drawing of Frost was created by Paul Calle. The stamp was engraved by Arthur W. Dintaman (vignette) and Robert G. Culin Sr. (lettering).