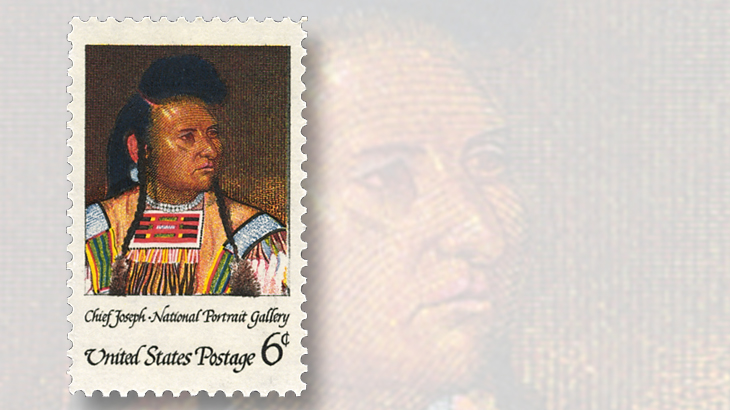 A 6¢ commemorative stamp issued in 1968 honors Chief Joseph on a portrait exhibited in the National Portrait Gallery.

After years of peaceful relations, the United States government in 1877 claimed land promised to the Nez Perce and sought to forcibly remove and resettle the native people.

With the onset of the Nez Perce War, Chief Joseph hoped to lead his band of about 1,000 people, including many women and children, to safety and freedom in Canada, a march of more than 1,000 miles.

An imprint on the back of a 1994 29¢ Legends of the West stamp honoring Chief Joseph (Scott 2869f) describes him as an “Eloquent, noble Nez Perce chief whose brilliant tactics allowed his people to fight off the U.S. Army across several states.”

Survivors of the long journey were captured in Montana Territory before they reached their intended destination. Chief Joseph gave a poignant speech about the suffering of his people, concluding with these words: “Hear me, my chiefs! I am tired. My heart is sick and sad. From where the sun now stands I will fight no more forever.”

Though eventually returned to reservations in the Northwest, Chief Joseph’s people were not allowed to return to their homeland, then inhabited by white settlers and miners.