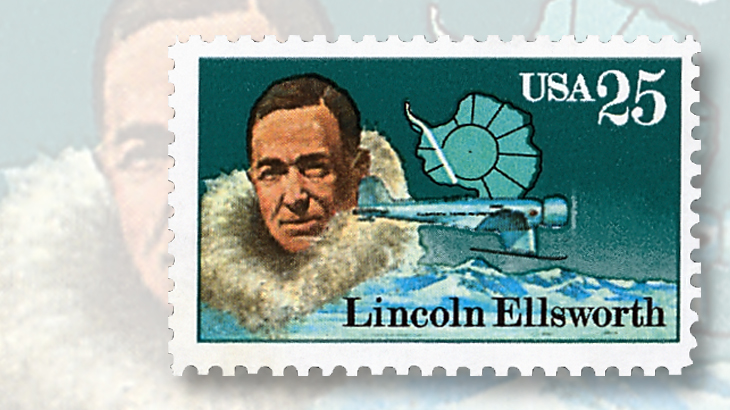 American explorer Lincoln Ellsworth, on a 25¢ stamp in the 1988 Antarctic Explorers commemorative set.

Lincoln Ellsworth, who explored both the North Pole and the South Pole, was born May 12, 1880, in Chicago, Ill.

Ellsworth worked in Canada for several years as a surveyor before serving in the U.S. Army during World War I. After the war he met Norwegian polar explorer Roald Amundsen in New York City and joined the 1925 Amundsen expedition, which unsuccessfully attempted to fly two airplanes across the Arctic to the North Pole.

A second attempt by Amundsen and Ellsworth the following year sought to cross the North Pole in an Italian-made dirigible named Norge piloted by Umberto Nobile. Their flight was a success, flying over the North Pole on May 12, 1926. Disputes about earlier claims of reaching the Pole leave the Amundsen-Ellsworth expedition as quite possibly the first successful documented attempt.

Ellsworth received the Congressional gold medal in 1928 to honor his explorations.

Ellsworth embarked on four expeditions in Antarctica during the 1930s. The third was a successful airplane flight across the continent in 1935, making Ellsworth the first man to cross over both Poles in an aircraft. During his expeditions he claimed some 380,000 square miles of Antarctica for the United States, and discovered previously unknown mountain ranges. He was awarded a second Congressional gold medal in 1936.