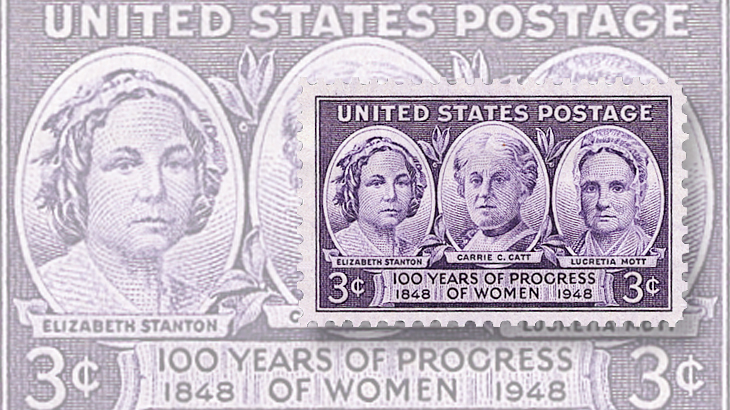 Elizabeth Cady Stanton is shown in the portrait at left on this 3¢ commemorative issued in 1948.

Nov. 12 marks the 200th birth anniversary of Elizabeth Cady Stanton, born on that date in 1815. During her lifetime she would be known as an abolitionist, a political reformer, a temperance leader, and a dynamic voice in the early struggle for women’s rights.

Stanton helped organize the 1848 First Woman’s Rights Convention in Seneca Falls, N.Y., which set forth demands for the right of women to vote in elections, co-authored by Stanton.

She was born in Johnstown, N.Y., and married abolitionist Henry Brewster Stanton in 1840, with the phrase “promise to obey” expunged from her wedding vows. The couple had seven children and remained together until Henry’s death in 1887.

Stanton was a supporter of alcohol temperance, a cause frequently championed by proponents of the women’s suffrage movement in the United States.

Working with other strong voices in the early feminist movement, including Lucretia Mott and Susan B. Anthony, Stanton continued to promote equal rights for women until the end of her life in 1902.

The 19th Amendment to the Constitution, extending to women the right to vote, was ratified Aug. 18, 1920.