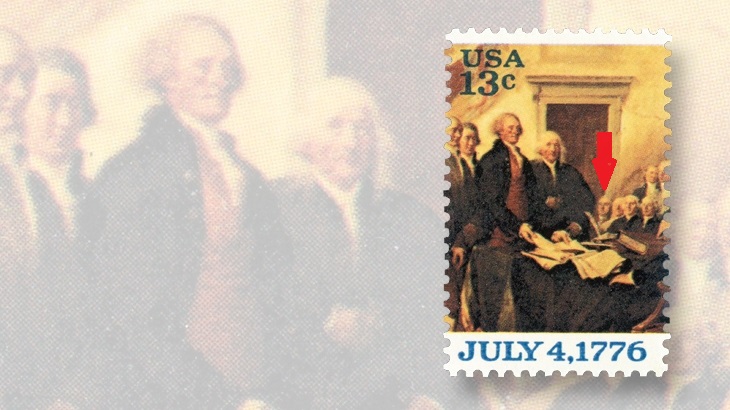 Richard Stockton, one of the signers of the Declaration of Independence, is shown on this 13¢ stamp issued in 1976.

Richard Stockton, a signer of the Declaration of Independence, was born Oct. 1, 1730, near Princeton, N.J. His father was John Stockton, a prominent landowner and judge of the Court of Common Pleas who provided funding and land to help establish the College of New Jersey, which would later be known as Princeton University.

Richard attended the college and graduated as a member of the class of 1748. He practiced law, but left the practice to visit England during 1766-67, and was provided an opportunity to speak before King George III.

He returned to the United States and was named to the New Jersey Supreme Court in 1774, and elected to the Continental Congress two years later.

After signing the Declaration, Stockton was taken prisoner in November 1776 and held under harsh conditions that ruined his health. He was released following a protest by George Washington, and would eventually return to his law practice. Stockton died in 1781.

Stockton’s New Jersey estate, Morven, is now a museum and garden open to the public with paid admission.

In John Trumbull’s oil-on-canvas painting Declaration of Independence, Richard Stockton is seated, the first signer visible directly to the right of Benjamin Franklin, who is standing in the foreground. In the 1976 four-stamp quadripartition reproducing the painting (Scott 1691-1694), Stockton is shown on the 13¢ stamp that is third from left (1693).