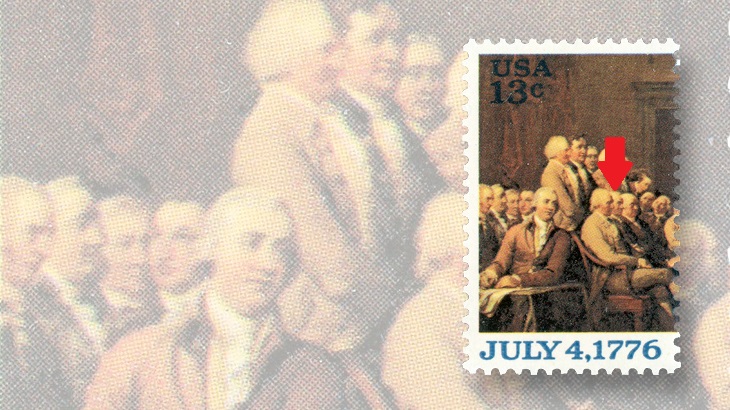 One of America's Founding Fathers, Samuel Adams, is shown among the statesmen on the 1976 Declaration of Independence set of four 13¢ stamps. Adams was born Sept. 27, 1722.

During the American Revolution, Samuel Adams was an important colonial leader relentlessly opposing British authority, a delegate to the Continental Congress and a signer of the Declaration of Independence.

Adams, who was born Sept. 27, 1722, in Boston, Mass., was a second cousin to John Adams, who would become the first vice president and second president of the United States. At age 14, Samuel Adams entered Harvard, graduating in 1740. He studied law briefly, then struggled with his business affairs, including an effort to establish himself as a maltster or brewer.

In the 1760s he became a voice for the colonies to pursue complete separation from Britain and protested the imposition of taxes, leading the opposition against the 1765 Stamp Act to collect taxes on colonial documents and newspapers.

Though not a participant in the Boston Tea Party, Adams was believed to have been one of its primary instigators. He became a member of the Massachusetts General Court, and from 1774 to 1781 he was a member of the Continental Congress. In John Trumbull’s oil-on-canvas painting Declaration of Independence, Adams is seated in a group at left. In the 1976 four-stamp quadripartition reproducing the painting (Scott 1691-1694), Adams is shown on the 13¢ stamp at far left, the second person from left in the group seated in front of the standing statesmen.

After the Revolution, Adams was elected to the Massachusetts state senate, and would serve as the state’s lieutenant governor from 1789 to 1793, when he became governor. During the second half of his life he suffered increasingly from essential tremor, and he retired in 1797. He died four years later at age 81.