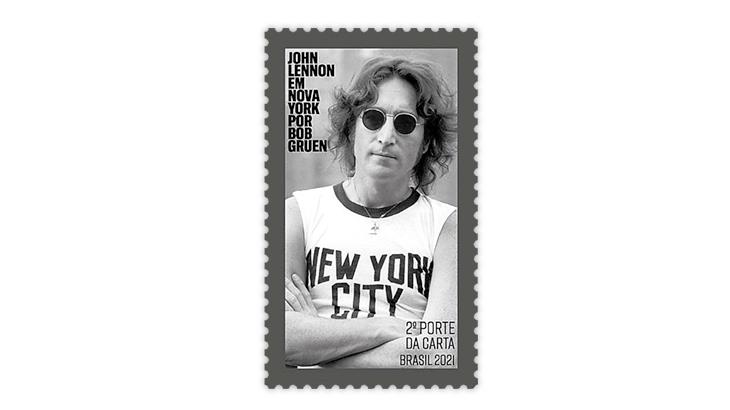 Brazil pays tribute to John Lennon and photographer Bob Gruen on this stamp issued Jan. 25 in conjunction with a display of Gruen’s photos in Sao Paulo. 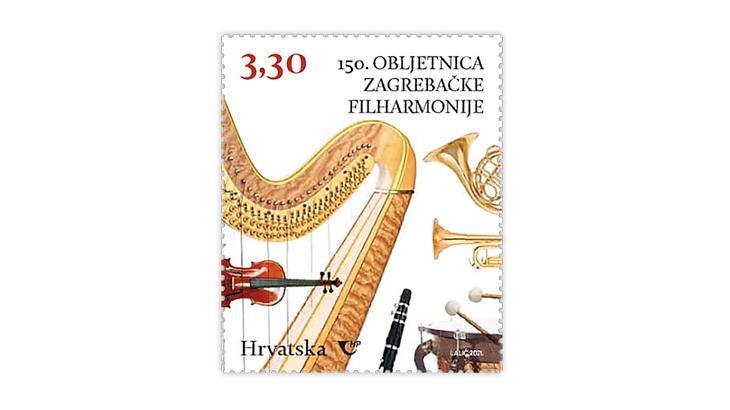 Croatia marks the 150th anniversary of the Zagreb Philharmonic Orchestra on this 3.30-kuna stamp issued Jan. 28. 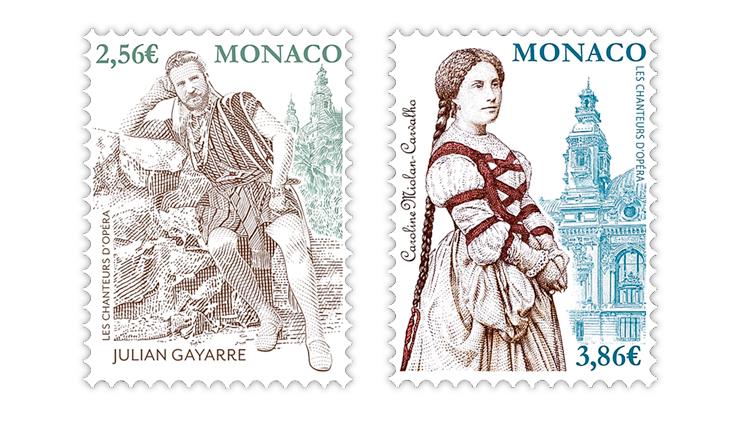 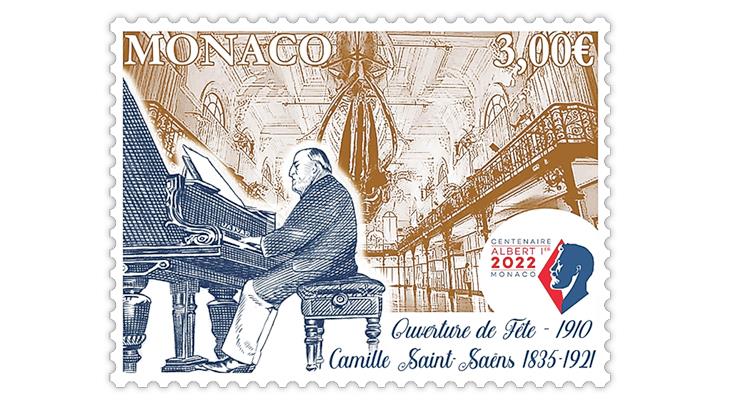 Camille Saint-Saens composed Ouverture de Fete for the 1910 opening of the Monaco Oceanographic Museum. The French composer is shown playing piano at that opening on Monaco’s new stamp commemorating his 100th death anniversary. 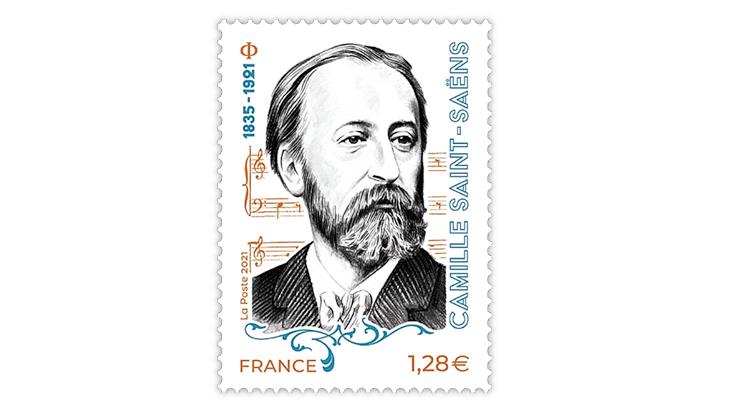 France will also issue a stamp for the 100th anniversary of Saint-Saens’ death. The scheduled issue date is March 22.
Previous
Next

Gruen says on his website, “After taking portrait photos of John Lennon’s face on the roof of Lennon’s New York apartment, I decided to take more photos for publicity. I had given John a NYC T-shirt a year earlier and with the skyline all around I asked John if he still had it as this would be the perfect place to wear it. John went and put it on to make this now iconic photo.”

The United States is among the many other countries that have honored the singer-songwriter and one of the founders of the Beatles on postage stamps. In fact, the four John Lennon stamps in the United States Music Icon series are based on another photo by Gruen from the same 1974 photo session. These forever stamps were issued Sept. 7, 2018 (Scott 5312-5315).

Brazil issued its nondenominated John Lennon stamp Jan. 25 in conjunction with an exhibition of Gruen’s photographs from his 2005 book John Lennon: The New York Years at the Museu da Imagem e do Som (Museum of Image and Sound) in Sao Paulo, Brazil.

The month-long exhibition was held Jan. 15 through Feb. 14, according to the museum’s website.

The title of the exhibition in Portuguese “John Lennon Em Nova York Por Bob Gruen” is inscribed in the upper left corner of the stamp. In the lower right corner is the country name and year date and an inscription indicating that the stamp pays the second-class domestic letter rate.

The Brazilian Mint printed the stamp by offset in sheets of 20. Jamile Costa Sallum designed it, using Gruen’s photograph.

The Croatian stamp commemorates the 150th anniversary of the Zagreb Philharmonic Orchestra, which performed its first concert Feb. 25, 1871. Issued Jan. 28, this 3.30-kuna stamp depicts a variety of musical instruments, with a harp the most prominent.

Also shown are another stringed instrument (a violin, viola or cello), a clarinet, a timpani drum, a trumpet and a French horn.

The Croatian Post said of the design, “Instruments in the hands of musicians have become the foundation of the celebratory visual, as a thank you and a kind of homage to all the musicians who made up the orchestra, to all the stars of the Zagreb Philharmonic.”

Alenka Lalic designed the stamp. AKD, a security printer in Zagreb, Croatian, printed it by offset in panes of 20. The images of the musical instruments in the stamp’s design extend into the pane’s perforated selvage.

The first paragraph of the biography on the website of the Julian Gayarre Foundation summarizes his career: “Julian Gayarre was a world-famous lyric tenor considered one of the best tenors ever in opera. After triumphing in the major theatres throughout the world, he died in 1890 at the top of his career which caused great sorrow among opera enthusiasts.”

The website also says, “There is no known recording of his voice yet an analysis by music critics found in period press along with the variety of his repertoire lead us to the same conclusion that some great contemporary tenors have drawn in that Gayarre’s voice was like no other.”

Miolan-Carvalho, born Dec. 31, 1827, in Marseille, France, is pictured as Marguerite in Charles Gounod’s Faust on the €3.86 stamp. She was the first Marguerite, starring in the March 19, 1859, premiere at Theatre Lyrique in Paris.

According to information from Monaco’s philatelic bureau (Office des Timbres de Monaco), she also “lit up the first season of the Monte-Carlo Opera in 1880” in that role. The bureau added, “The elegance and purity of her style, her virtuosity, the lightness of her voice, and her incomparable phrasing, made her one of the greatest lyrical artists of the 19th century.”

Miolan-Carvalho retired from the stage in 1885, 10 years before her death.

Monaco and France are commemorating the 100th death anniversary of French composer Camille Saint-Saens (1835-1921) on stamps this year.

In addition to being a composer, Saint-Saens was an organist, pianist, conductor, child prodigy and more.

France’s La Poste provided more details of his performances as a child and also mentioned a postal connection in its announcement of the stamp:

“A child of fragile health, suffering from tuberculosis like his father, Camille Saint-Saens was no less a piano prodigy at five years old. He gave his first concert at the age of eleven in 1846. Organist for twenty years at the Church of the Madeleine, he resigned when one of his friends, Albert Libon, Director General of the Post Office, bequeathed him 100,000 francs in 1877 on the condition to devote himself exclusively to composition.”

The new-issue announcement from Monaco points out his connections to opera and the principality: “He wrote a dozen operas, the best known of which is unquestionably Samson and Delilah (1871). A friend of Prince Albert I, he wrote, at the latter’s request, the Ouverture de Fete, which he played at the official opening of the Monaco Oceanographic Museum in 1910.”

Designed and engraved by Elsa Catelin, Monaco’s stamp shows Saint-Saens playing piano at the museum’s opening. It also includes the logo of Monaco’s 2022 celebration of the life and work of Prince Albert I in conjunction with the centenary of his death

Philaposte printed the stamp by a combination of offset and intaglio, and it is sold in panes of 10.

The French stamp, designed and engraved by Sarah Lazarevic, features a portrait of the composer in the foreground and a musical score in the background. Philaposte printed this stamp by intaglio in panes of 15.