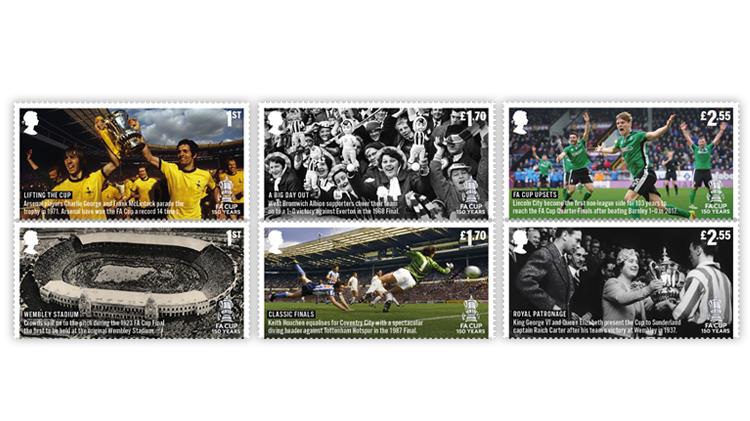 Six stamps from Great Britain’s March 8 issue celebrate the 150th anniversary of the Football Association (FA) Challenge Cup, now known as the Emirates FA Cup. The stamps, which are in three se-tenant pairs, feature photographs of some of the most famous 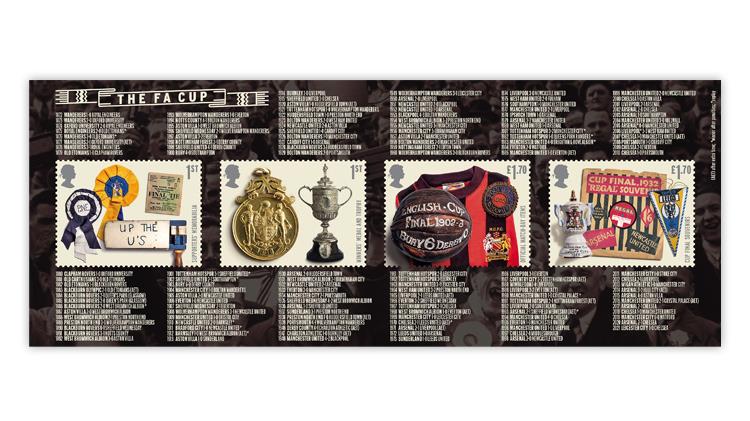 Great Britain’s Royal Mail also is issuing a souvenir sheet for the anniversary of the Football Association Challenge Cup. The sheet includes two first-class stamps and two £1.70 stamps picturing items housed in the National Football Museum in Manchester,
Previous
Next

Royal Mail, the post office of Great Britain, is commemorating the 150th anniversary of the Football Association (FA) Challenge Cup with a March 8 issue of 10 stamps.

Six of the stamps celebrate themes that make this soccer cup such a prestigious competition. The other four stamps, presented on a souvenir sheet, show artifacts from the National Football Museum in Manchester, England, photographed specifically for the stamps.

The FA Cup, known as the Emirates FA Cup since 2015, is an annual soccer (called football in other countries) tournament for English clubs. In the first FA Cup tournament of 1871-72, 12 teams took part. The 2021-22 tournament began with 729 clubs. That tournament is currently taking place in England, with the semifinal scheduled on April 16 and the final on May 14.

Natasha Ayivor, senior communications manager at Royal Mail, said that “the Emirates FA Cup has given the world some of the greatest displays of competition football. These stamps celebrate the magic of those moments. We feel there is no more fitting tribute to its 150th anniversary than this collection of Special Stamps.”

One of the first-class stamps shows Arsenal Football Club players Charlie George and Frank McLintock hoisting the trophy after winning the tournament in 1971. Text on the stamp further explains that Arsenal has won the FA Cup a record 14 times.

The other first-class stamp shows an aerial view of crowds running onto the field during the 1923 FA Cup final at Wembley Stadium. This was the first final held at the original Wembley Stadium, which then annually hosted the final.

The 1923 FA Cup final at Wembley drew a record attendance for the stadium, with an official attendance of 126,047 and estimates of up to 300,000 trying to view the match.

One of the £1.70 stamps presents a black-and-white photograph of fans cheering at the 1968 final. As explained in text on the stamp, West Bromwich Albion defeated Everton in the final by a score of 1-0.

In the design of the other £1.70 stamp, Keith Houchen is shown scoring a goal to tie the match for Coventry in the 1987 final against Tottenham Hotspur. Coventry City won the match by a score of 3-2 in extra time. The BBC designated Houchen’s goal as the “goal of the season” in an annual competition dating back to 1970 and continuing today.

A £2.55 stamp shows Lincoln City players’ jubilant reactions in a tournament upset. In 2017, Lincoln City became the first nonleague team in 103 years to reach the FA Cup quarter-finals after beating Burnley 1-0. Lincoln City lost the next round to Arsenal, which went on to win the final.

The black-and-white photograph on the other £2.55 stamp shows King George VI and Queen Elizabeth presenting the trophy to Raich Carter, the captain of the Sunderland team, in 1937. Carter was inducted into the English Football Hall of Fame in 2013, according to the website of the National Football Museum.

The souvenir sheet includes two first-class stamps and two £1.70 stamps. The items pictured on the stamps are housed in the National Football Museum in Manchester, England. The selvage lists the teams and scores of all the FA Cup finals since the tournament began in 1872.