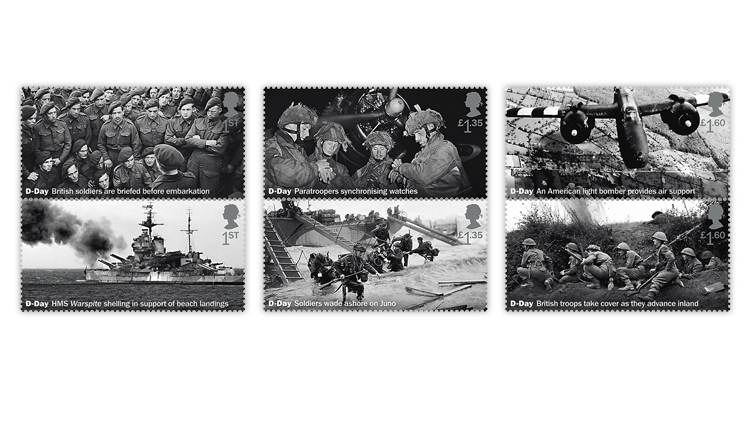 Six stamps in Great Britain's June 6 D-Day issue are in three se-tenant pairs. The designs include photographs of troops, a warship, landing crafts and airplanes. 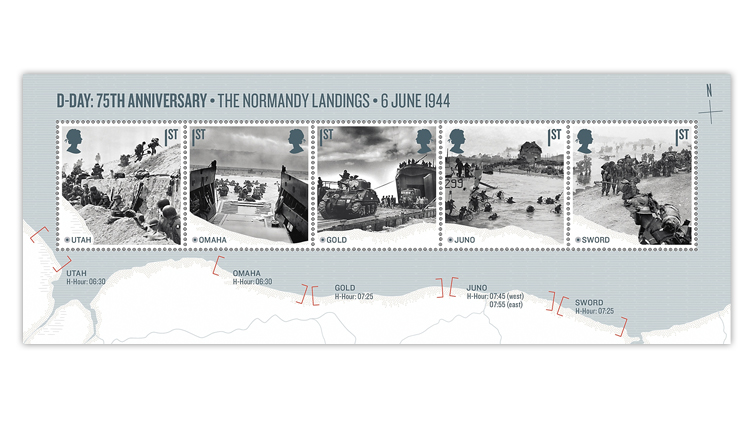 Great Britain’s Royal Mail is commemorating the 75th anniversary of D-Day, the largest amphibious assault in history, on a set of 11 stamps being issued on June 6, the anniversary date.

In announcing the stamps, Philip Parker of Royal Mail said, “The Allied assault of D-Day and Operation Overlord would prove to be one of the key turning points of the War [World War II]. 75 years on, as these events pass from memory into history, our new stamps pay tribute to the courage and sacrifice of all those who took part.”

The stamps in Great Britain’s D-Day set reproduce black-and-white photographs of the invasion in which 156,000 Allied troops from the United States, Great Britain, Canada and 10 other countries landed on the beaches of Normandy, a region of northern France.

Six of the stamps are in three vertical se-tenant pairs. The other five are in a souvenir sheet that focuses on the five beaches.

The website of Great Britain’s Imperial War Museums said: “On 6 June 1944 — ‘D-Day’ — Allied forces launched the largest amphibious invasion in the history of warfare. Codenamed Operation ‘Overlord’, the Allied landings on the beaches of Normandy marked the start of a long and costly campaign to liberate north-west Europe from Nazi occupation.

“On the morning of D-Day, ground troops landed across five assault beaches — Utah, Omaha, Gold, Juno and Sword. By the end of the day, the Allies had established themselves on shore and could begin the advance into France.”

The souvenir sheet is inscribed at the top “D-Day: 75th Anniversary • The Normandy Landings • 6 June 1944.” At the bottom is an outline map showing the beaches from west to east with the hour of the invasion “H-Hour” given.

The five nondenominated first-class stamps in the souvenir sheet are arranged in the same order, starting with the westernmost beach, Utah, on the far left.

Before the more than 23,000 men of the United States 4th Infantry Division landed on Utah Beach on D-Day, troops of the U.S. 82nd and 101st Airborne Divisions had already been dropped in the area.

The next stamp shows troops disembarking on Omaha Beach, in what would become the bloodiest of the D-Day landings.

The Normandy tourism website said: "The infantry coming ashore [U.S. 1st and 29th Infantry Divisions] were decimated by German fire across the long beaches. Despite heavy losses, small groups of Americans made it up the slopes and took German positions from behind, so some gains were made, if at heavy human cost. At the end of the day, the forces that landed here suffered 3,000 casualties, of whom c.1,000 died."

A photograph of amphibious tanks being unloaded for the invasion of Gold Beach is pictured on the center stamp.

Royal Mail said: “Nearly 25,000 men of the British 50th Division landed on Gold on D-Day. Their objectives were to capture the town of Bayeux and the Caen-Bayeux road, and to link up with the Americans at Omaha … by the end of the day, British troops were successful in joining up with Canadian troops from Juno.”

Like Omaha Beach, casualties at Juno Beach were high. The fourth stamp, which represents Juno, depicts troops of the 9th Canadian Infantry Brigade disembarking with bicycles from a landing craft.

The easternmost beach, Sword, is portrayed on the final stamp in the souvenir sheet.

The Imperial War Museums describes the photograph shown on the stamp: “Troops of 3rd Infantry Division on Queen Red beach, Sword area …. In the foreground are sappers of 84 Field Company Royal Engineers, part of No. 5 Beach Group, identified by the white bands around their helmets. Behind them, medical orderlies of 8 Field Ambulance, RAMC, can be seen assisting wounded men. In the background commandos of 1st Special Service Brigade can be seen disembarking from their LCI(S) landing craft.”

The other stamps include a se-tenant pair of nondenominated first-class stamps, a pair of £1.35 stamps and a pair of £1.60 stamps.

An inscription at the bottom of each of these designs explains what is shown in the photograph.

The first of the two nondenominated stamps is inscribed “British soldiers are briefed before embarkation.” Royal Mail provided further information about the photo, stating that it shows men of No. 4 Commando, 1st Special Service Brigade, being briefed by their commanding officer, Lt. Col. R. Dawson.

The second stamp in this pair shows “HMS Warspite shelling in support of beach landings,” according to the inscription.

The inscription on the top stamp in the £1.60 pair reads, “An American light bomber provides air support.” The other stamp is inscribed “British troops take cover as they advance inland.” This photograph of the East Yorkshire Regiment was taken July 19, 1944.

Baxter and Bailey designed the 11 stamps, using photographs from the Imperial War Museums and other sources. International Security Printers printed the stamps by lithography.

In addition to the aforementioned stamps, the D-Day issue also includes a retail booklet containing six stamps: four nondenominated first-class Queen Elizabeth II definitives and the Gold and Sword beach stamps from the souvenir sheet. The stamps in this booklet were printed by gravure.

Among the related products are first-day covers; 12 postcards reproducing the designs of the 11 stamps and the souvenir sheet; and a presentation pack with the stamps, the souvenir sheet and text by experts from Imperial War Museums.

When Royal Mail announced its stamp program for 2019 on Dec. 27, 2018, it provided an image of a £1.25 D-Day stamp showing a photograph and bearing the inscription “Allied soldiers and medics wade ashore.”

As Michael Baadke reported in the Jan. 21 issue of Linn's, within hours of the announcement, it was determined that the photograph was not related to D-Day but instead showed the “United States Coast Guard’s May 17, 1944, landing on the beach at Sarmi, Netherlands New Guinea (now Indonesia).”

Royal Mail apologized for the mistake, confirming that the design would not be included in the D-Day set.