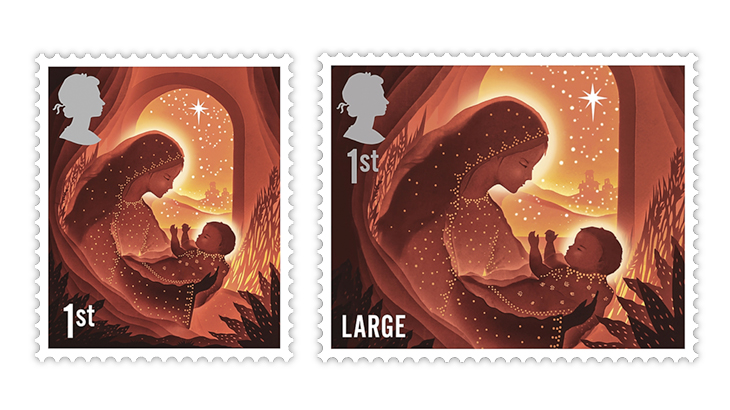 Great Britain’s new Christmas stamps issued Nov. 5 include two first-class stamps, one for standard-size mail and one for large mail. The stamps show Mary holding the baby Jesus with the Star of Bethlehem shining in the background. 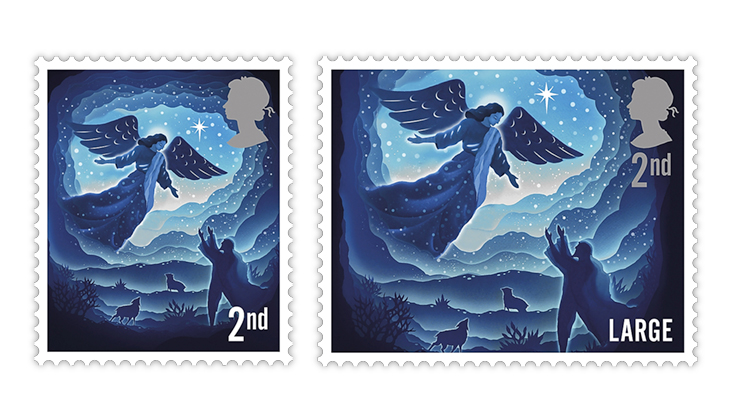 An angel is featured on the two second-class stamps in Great Britain’s new Christmas set. 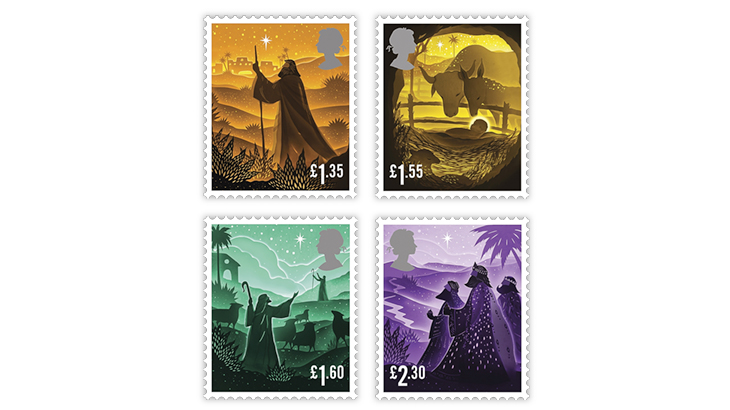 The four denominated stamps in Great Britain’s Christmas issue show Hari and Deepti’s illustrations of scenes from the Biblical account of the birth of Jesus. 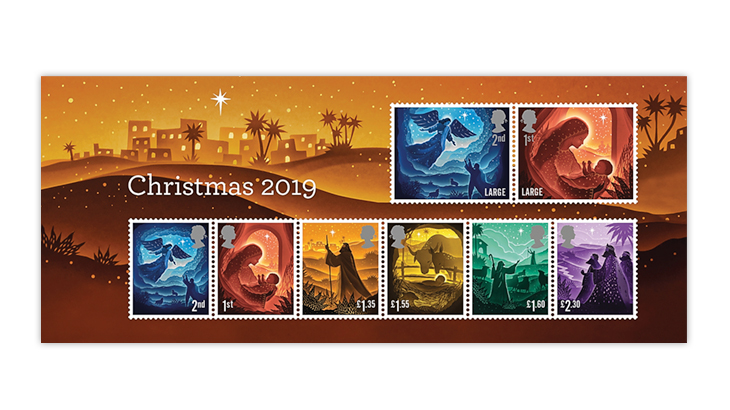 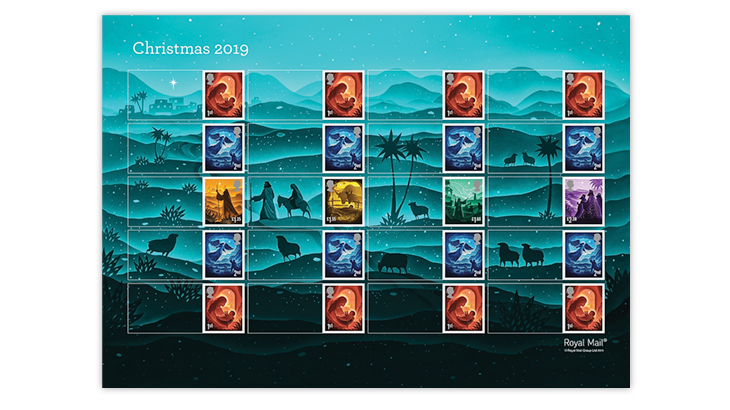 All eight new Christmas stamps also are included in this pane of 20 with se-tenant labels.
Previous
Next

Great Britain’s Royal Mail is celebrating Christmas with eight stamps picturing scenes from the Biblical story of the birth of Jesus. The stamps were issued Nov. 5.

Charlie Smith Design of London designed the stamps using illustrations by paper-cut artists Hari and Deepti. Now working from Mumbai, India, this husband and wife team was previously based in Denver, Colo.

Royal Mail said of their artwork for the stamps, “Based on a collaboration of paper-art and light, their work this year brings to life the magical story of Christmas with imaginative story-telling and intricate detail.”

Each stamp shows the Star of Bethlehem shining over a scene based on a Biblical account of the Nativity. The scene is shown in shades of a single color.

“Noticeable in this design is a bright shining star present amongst a scattering of many other tiny stars with shadows of some buildings standing tall in the nearby distance.”

The scene is expanded on the stamp for large mail.

Shades of blue dominate the two second-class stamps, which depict a messenger angel, sheep and a man.

The £1.35 and £1.55 stamps are in different shades of gold. Joseph is featured on the £1.35 stamp with the buildings of a town in the background. The £1.55 stamp shows animals watching over the baby Jesus in the stable.

On the design of the £1.60 stamp, the shepherds and their sheep are pictured in shades of green. The £2.30 stamp depicts the three kings, also known as the Magi, in shades of purple.

The scenes shown on the stamps are summarized in the text on the filler card that is included inside Royal Mail’s first-day covers for the Christmas stamps: “From the starry heavens, God sends angel-messengers on missions of blessing. The angel Gabriel finds Mary and Joseph and tells them of their blessing: Mary will bear a special God-sent son, who will become a saviour. We can imagine Joseph praying: ‘O send out thy light and thy truth let them lead me.’ (Psalm 43:3).

“Mary and Joseph journey to Bethlehem, and their baby is born in a stable. Shepherds hear the message of hope and peace embodied in the new baby and come to visit, as do royal seekers of wisdom — three wise men or kings … ”

In addition to the illustrations, each stamp includes a silhouette of Queen Elizabeth II in either the upper right or left corner with the denomination or service indicator below it in the lower left or lower right corner.

The two stamps for large mail each measure 34 millimeters by 28mm, and the other stamps are 24mm by 28mm. The stamps are self-adhesive, with die-cut perforations that gauge 14.5 by 15.

International Security Printers printed them by gravure in sheets of 50 (also sold in panes of 25), and in other formats: booklets, a souvenir sheet and a pane of 20 stamps and labels.

The nondenominated first- and second-class stamps for standard letters were produced in separate booklets of 12.

Royal Mail calls the pane of 20 stamps and labels “a generic sheet.” It includes eight each of second- and first-class stamps, and one of each of the denominated stamps shown against a background described by Royal Mail as “an evocative Nativity scene depicting Mary and Joseph on the journey to Bethlehem.”

Other products offered include FDCs, a set of nine postcards reproducing the designs of the stamps and the souvenir sheet, and a presentation pack with all eight stamps, plus illustrations and text.

The stamps and related products are available from the Royal Mail website.

Royal Mail alternates the basic theme of its Christmas stamps, issuing nonsecular or religious stamps in odd years, and secular stamps in even years.