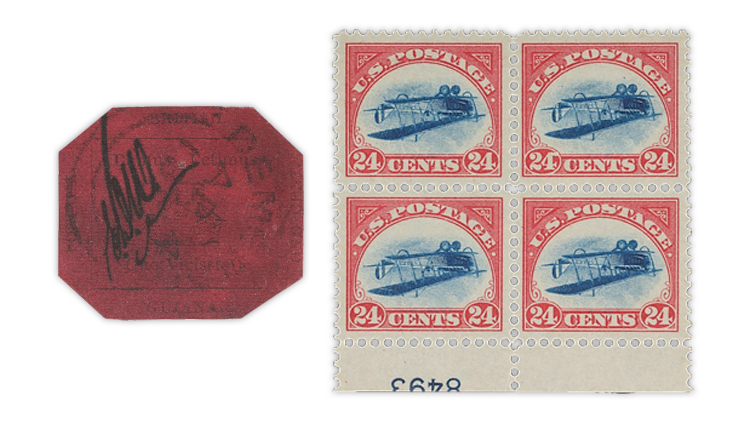 The sale, one of the swiftest in Sotheby’s history, established a new record price for a rare coin, but the realizations for the two stamp items fell shy of their presale estimates.

The 1933 $20 Double Eagle gold coin, once belonging to Egypt’s King Farouk and now unique in private hands, fetched a stratospheric $18.9 million, well beyond its $10 million to $15 million estimate and nearly double its prior auction realization.

The Inverted Jenny plate block, a unique positional multiple of the famously misprinted 1918 airmail stamp (Scott C3a), brought $4.87 million. That is well above its last auction performance in 2005, when bond trader William H. Gross purchased it anonymously for $2.97 million, but not much better than the reputed $4.5 million to $5 million that Weitzman is said to have paid its next owner, Donald Sundman of Mystic Stamp Co., in a private sale a few years later.

The block had been estimated by Sotheby’s before the sale at $5 million to $7 million.

Finishing out the banner sale was the unique and storied 1856 British Guiana 1¢ Magenta (Scott 13), dubbed “the Mona Lisa of stamps” by Sotheby’s auctioneer Richard Austin. Perhaps the toughest of the three treasures to predict a result for, it ended up going for $8.3 million, more than $1 million below the price Weitzman bid for it seven years ago at the same auction house.

While still a world record holder for any stamp or philatelic item, it fell substantially short of its presale estimate of $10 million to $15 million, and marked the first time in its long history that the 1¢ Magenta has sold for less than its previous realization.

The sale also seemed to cement the trend of recent decades in which top rare coin prices have continued to soar, while stamps have more or less plateaued.

The auction began promptly at 10 a.m. Eastern Time. Because of lingering COVID-19 restrictions, Sotheby’s did not allow members of the press to be physically present in the room, but the sale was live-streamed online.

The 1933 Double Eagle opened with a reserve bid of $7 million, which very quickly ran up to $10 million, then $12 million. There was a lengthy pause while bidders in the room contemplated their next moves. Then it continued in half-million-dollar increments as a phone bidder and a bidder in the rear of the room batted it back and forth to $16.5 million. The auctioneer remained serene, showing no desire to rush his bidders and giving them plenty of time to think about it.

“I’ll take 17 if you’d like, sir,” Austin intoned. The bidder in the room did not reply.

Eventually, the room bidder gave in and the coin was hammered for $16.75 million to the phone bidder.

Initially, Sotheby’s reported this result as totaling $19,509,750 with the buyer’s premium, which is calculated in a somewhat complicated manner as the percentage decreases with the increasing bids: 25 percent on the first $400,000, 20 percent on the amount from $400,000 to $4 million, and 13.9 percent thereafter. There are also some additional fees and charges, though sales taxes, if applicable, are not included in the reported result.

Bidding moved on to the Inverted Jenny plate block, starting at $3 million. Quickly it ran up to $3.5 million, then paused. Again, Austin seemed to be in no hurry. The bidding pace resumed, inching by $100,000 increments to $3.6 million, $3.7 million, and coming to a halt at $4 million.

Austin fished for $4.2 million, but there were no further bites, and he seemed happy to let it go for what worked out to $4,869,000 with buyer’s premium.

Finally, all eyes turned to the British Guiana 1¢ Magenta, the most enigmatic of the three items on the block. Bidding opened at $5 million and quickly ran up to $7 million with a phone bidder. As usual, the bidding paused, but this time, Austin seemed to sense instinctively that the game was up and there would be no further bids, so without further ado, he swiftly hammered it down.

Within two hours of the sale, the British dealer and philatelic publisher Stanley Gibbons announced it was the purchaser of the stamp and intended to “democratise the ownership” of it, presumably by selling shares in the stamp to the public. It is a novel and unexpected twist to the stamp’s long-running saga.

A special web page set up by Gibbons at www.1c-magenta.com allows curious visitors to enter their email address to be kept apprised of forthcoming details on their plans.

There was no word yet on whether Gibbons intends to add an owner’s mark of its own to the numerous other autographs and handstamps that litter the reverse of the stamp.

A short time later, Sotheby’s made this announcement: “We can now confirm that the Inverted Jenny Plate Block was acquired by David Rubenstein, the co-founder and co-executive chairman of The Carlyle Group. He made headlines several years ago as the buyer of the Magna Carta that was sold at Sotheby’s for $21.3 million.”

Austin, who is also Sotheby’s global head of books and manuscripts, said, “To offer any one of these pieces at auction would be a milestone in its own right, but to offer them together in this special sale was a once-in-a-lifetime opportunity.

“The uniqueness of this moment is a testament to Stuart’s passion and dedication to his childhood ambition of acquiring these prized pieces — and we hope this sale inspires other collectors to start their own journey.”

Weitzman added: “It has been an honor to be a custodian of these three legendary treasures and it fills me with great joy to have fulfilled a childhood dream of bringing these remarkable pieces together into one collection. I started coin collecting to pass the time in a full leg cast at the age of 12, and later became interested in stamps when my older brother left behind the stamp book he’d started when he went to college. The passion for collecting took root immediately, and today truly marked the culmination of a life’s work. I’m delighted that the proceeds of the sale will help support a number of charitable causes and educational endeavors that are near and dear to me.”

Sotheby’s notes that the seller’s proceeds will benefit charitable ventures, including the Weitzman Family Foundation, which has supported medical research and higher education such as Boston Children’s Hospital and the Stuart Weitzman School of Design at the University of Pennsylvania. Other major projects of the foundation include a museum in Madrid devoted to Spanish-Judeo history.

A live conversation about the stamps and their sale, with analysis of the significance of the results, took place on Facebook on Tuesday morning at the page of the Philatelic Traders Society, the British equivalent of the American Stamp Dealers Association (ASDA). It was joined by Suzanne Rae, the chairman of the PTS; Marcus Orsi of the Swiss auction firm David Feldman; Peter Cockburn, the incoming president of the Royal Philatelic Society, London; and Graham Beck, a British philatelist with a popular YouTube channel on stamp collecting.

A recording of the hourlong chat can be watched by visiting Facebook and searching for the user @ptsandstampex.

This article was revised shortly after its original publication to include the identification of the stamp buyers, and reactions from auctioneer Richard Austin and Stuart Weitzman following the sale.