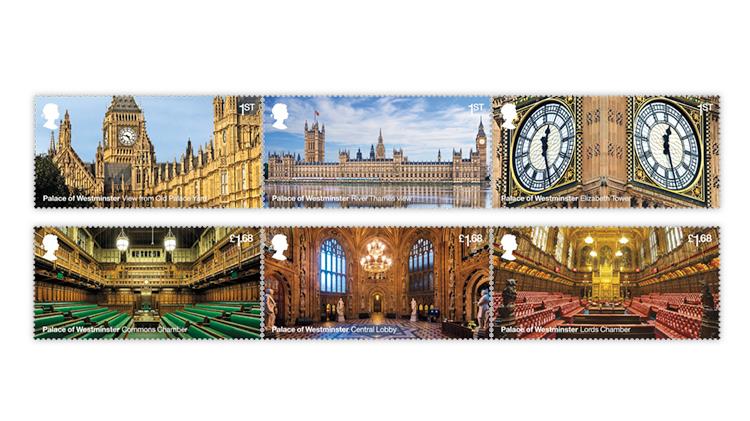 Exterior and interior scenes of the Palace of Westminster, where Great Britain’s two houses of Parliament met, are shown on these six stamps in Royal Mail’s July 30 issue commemorating the 150th anniversary of the completion of the rebuilding of the palac 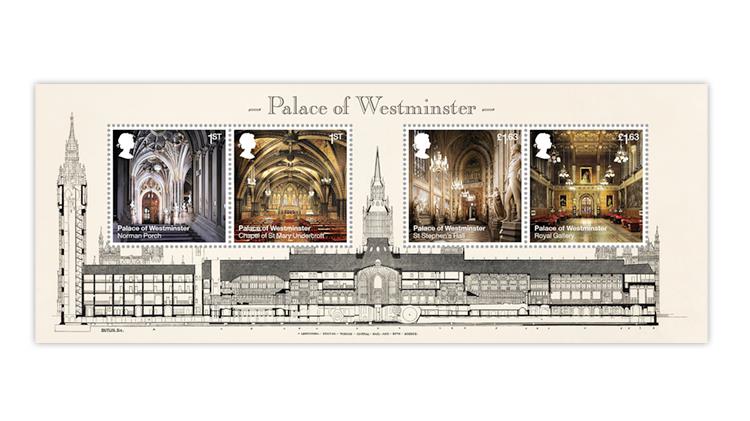 The souvenir sheet for Great Britain’s Palace of Westminster issue includes four stamps featuring the palace’s grand chambers and historic halls. An 1850 drawing by the architects Charles Barry and Augustus Pugin is in the selvage.
Previous
Next

Great Britain’s Royal Mail is issuing 10 stamps July 30 to mark the 150th anniversary of the rebuilding of the Palace of Westminster, also known as the Houses of Parliament.

Most of the medieval complex that stood on this location on the River Thames in London was destroyed by fire in 1834. A design by architect Charles Berry (1795-1860) was selected for the new palace. He was assisted by Augustus Pugin (1812-52).

Construction began in 1840 and was completed three decades later, in 1870.

Six of the new stamps are in two se-tenant (side-by-side) strips of three, and the other four are in a single souvenir sheet. All 10 stamps feature photographs of what Royal Mail calls an “iconic landmark and one of the most famous buildings in the world.”

The stamps in the strip of three nondenominated first-class stamps (currently 76 pence) show exterior views of this gothic-style palace.

The stamp in the center of this strip pictures the palace as seen from the River Thames in the center. The stamp on the right features Elizabeth Tower, commonly called Big Ben. However, Big Ben is the nickname of the bell housed within the tower (the bell’s name is the Great Bell).

That clock tower also can be seen in the background on the stamp on the left, which shows a view of Westminster Palace from the Old Palace Yard.

Interior scenes are depicted on the strip of three £1.68 stamps. The denomination pays the rate for mail to Europe weighing up to 100 grams.

The website of the Parliament calls the central lobby the “core of the Palace of Westminster,” adding that it was designed by Berry “as a meeting place for Members of both Houses, and where MPs [members of Parliament] can meet their constituents.”

According to that website, the Lords Chamber is the palace’s most lavishly decorated room.

“It has the grandest interior because it is where the three elements of Parliament (the Sovereign, the Lords and the Commons) come together. The furnishings in the Chamber are predominantly decorated in red, while green is the colour of the Commons’ end,” the website said.

The Commons Chamber was destroyed by a fire after the palace was hit by bombs in World War II. Architect Giles Gilbert Scott (1880-1860), who previously had designed the United Kingdom’s red telephone booth, was selected to rebuild the chamber.

The souvenir sheet contains a pair of first-class stamps on the left and a pair of £1.63 stamps on the right. The £1.63 denomination pays the worldwide rate for letters up to 20 grams.

Royal Mail said, “Grand chambers and historic halls feature on four stamps celebrating the spectacular architecture and design of the Palace of Westminster.”

Starting on the left, the first stamp in the sheet depicts the Norman Porch in the Victoria Tower. The porch is the landing at the top of the Royal Staircase.

The other first-class stamp shows the Chapel of St. Mary Undercroft. Although it was damaged in the 1834 fire, this late 13th-century underground chapel survived. Barry’s son, Edward (1830-80), restored the chapel in the 1860s.

Above the chapel is St. Stephen’s Hall, which is pictured on the first £1.63 stamp in the souvenir sheet. Before the 1834 fire, this hall served as the meeting place for the House of Commons. It also occasionally was used by the House of Commons during the restoration of the Commons Chamber after WWII.

The last stamp in the sheet depicts the Royal Gallery. According to the Parliament’s website, “Originally called the Victoria Gallery, this is the largest room in the Palace of Westminster and was designed to be imposing. Almost every part of the Gallery is highly decorated, including the ceiling, wallpaper, wood panelling and floor tiles.”

The gallery is used to host special occasions, often involving both houses of Parliament. For example, President Ronald Reagan addressed Parliament there in 1982, as did President Bill Clinton in 1995.

The souvenir sheet also features an 1850 longitudinal section architectural drawing through the central hall and both houses in the selvage. Inscribed at the top of the sheet is “Palace of Westminster.”

Other products offered by Royal Mail in conjunction with the Palace of Westminster issue include postmarks, first-day covers, a presentation pack, and 11 postcards reproducing the designs of the stamps and the souvenir sheet. The presentation pack includes the stamps and the souvenir sheet, as well as text by author and former Palace of Westminster assistant curator Jacqueline Riding about the architecture of the palace.