British stamps show eight battles of the War of the Roses 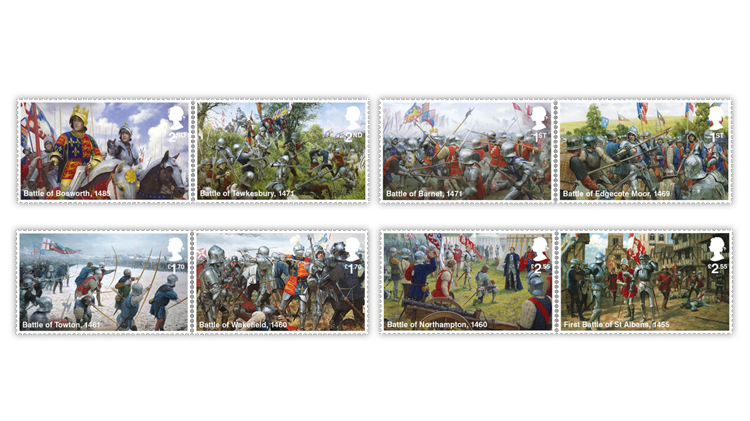 Great Britain is commemorating eight battles of the War of the Roses on stamps being issued May 4 in four se-tenant pairs. The battles are shown in reverse chronological order on the stamps, beginning with the Battle of Bosworth in 1485 on a second-class

Great Britain’s Royal Mail is issuing eight stamps May 4 picturing key battles of the War of the Roses, a series of civil wars fought between 1455 and 1487, for the throne of England. The stamps commemorate the 550th anniversary of one of these conflicts, the Battle of Tewkesbury on May 4, 1471.

Royal Mail said that it also worked with writer, historian and researcher David Grummitt on the stamp issue.

In the April 20 press release, Royal Mail said: “It can be argued that the Wars of the Roses, due largely to the history plays of William Shakespeare, is one of the best known, if least understood, periods of English history.

“The Wars of the Roses were fought between the two rival cadet branches of the royal House of Plantagenet: the House of Lancaster and the House of York, and were named — many years later — after the supposed emblems of the contending parties: the white rose of York and the red rose of Lancaster.”

A scene of the Battle of Tewkesbury is pictured on one of the two se-tenant nondenominated second-class stamps. Royal Mail described the scene as picturing the Yorkist King Edward IV leading his men “forward after a failed Lancastrian attack on his flank.”

The website of Historic England, the public entity that protects England’s historic places, described this decisive encounter as ending the second phase of the Wars of the Roses.

According to Historic England, “Edward IV’s victory and the death of Henry VI’s son and heir, shortly followed by Henry’s own death and Queen Margaret’s imprisonment, destroyed hopes of a Lancastrian succession and led to fourteen years peace.”

International Security Printers printed the stamps by lithography in sheets of 60 (sold in panes of 30 at most postal outlets). Each stamp is 50 millimeters by 30mm and perforated gauge 14.

The First Battle of St. Albans is considered the beginning of the War of the Roses. The Yorkists, fighting under Richard Duke of York and Richard Neville, Earl of Warwick, won this battle in the city of St. Albans in Hertfordshire.

Royal Mail said of the illustration on the £2.55 stamp, “On 22 May 1455, the streets of St. Albans see the first blows of the Wars of the Roses when the Duke of York and his allies attack the royal party.”

The Yorkists also won the Battle of Northampton on July 10, 1460. The stamp shows Edward, Earl of March, proclaiming his loyalty to the captured Henry VI after this battle.

Edward would soon become King Edward IV of England, after the death of his father in the Battle of Wakefield. Royal Mail said of the £1.70 stamp that shows intense fighting in this battle, “On 30 December 1460, the sons of the Lancastrian lords killed at St. Albans five years earlier cut down Richard, Duke of York.”

The other £1.70 stamp features the Battle of Towton. Fought on a snowy Palm Sunday, March 29, 1461, it has been described as one of the largest and bloodiest battles on English soil, with perhaps more than 50,000 men fighting with deaths estimated at 28,000.

The design depicts the Yorkist archers aiming at the advancing Lancastrians. The springtime blizzard aided these archers.

In a May 28, 2017, article for the Guardian newspaper titled “Snow that changed the course of history,” Paul Brown wrote: “The Lancastrians outnumbered the Yorkists but lost the advantage because they were firing their arrows into the wind and swirling snow. These were falling short of the enemy while the Yorkist arrows carried further in the wind to deadly effect, killing many who were without protective armour, and paving the way for a victory that brought Edward IV to the throne.”

A scene of the Battle of Edgecote Moor in July 1469 is illustrated on a first-class stamp. The central figure in the design is Yorkist knight Sir Richard Herbert showing “his prowess fighting on the front line against rebel forces on 26 July 1469,” according to Royal Mail. The rebel forces won, however, and Richard was captured and executed.

The first-class Battle of Barnet stamp shows Edward IV leading his army into battle on April 14, 1471. He was victorious, defeating and killing Neville, who had become known as “Warwick the Kingmaker.”

The second-class stamp representing the Battle of Bosworth shows King Richard III marshaling his “men before his final, heroic charge on 22 August 1485,” according to Royal Mail.

The defeat and death of Richard III in that battle marked the end of the Plantagenet dynasty and ushered in the Tudor dynasty with Henry VII as its first king.

In conjunction with the War of the Roses issue, Royal Mail is offering postmarks, a first-day cover, eight postcards reproducing the designs of the stamps, and a presentation pack. The pack includes the stamps, illustrations, text by Grummitt, and a time line with a summary of each conflict depicted on the stamps.