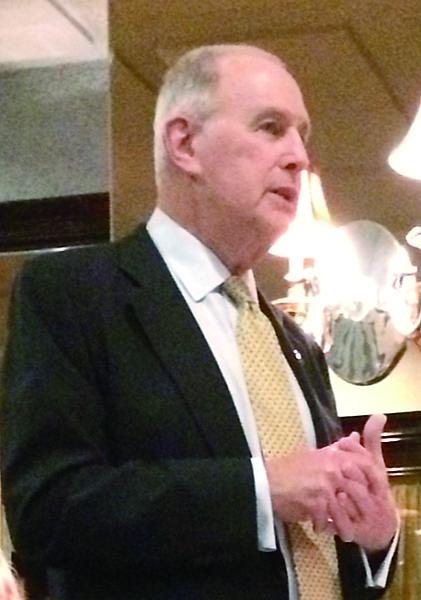 Roger S. Brody was honored by the Collectors Club of New York at its annual awards dinner May 7. Linn’s Stamp News photo by Matthew Healey.

The Collectors Club bestowed its 2014 Alfred F. Lichtenstein memorial award for outstanding service to philately on Roger S. Brody during its annual awards dinner May 7 in New York.

Brody is an accomplished philatelic researcher and exhibitor who has won numerous gold awards for his collections of early 20th-century United States stamps.

In announcing the award on its web site (www.collectorsclub.org/awards.shtml), the club called Brody “a recognized expert” in the area.

He has published articles in many respected philatelic journals, including Linn’s, and delivered lectures at the Royal Philatelic Society in London and the National Postal Museum in Washington. His most notable work has focused on the U.S. definitive-stamp series of 1902.

His specialized collection of that series was sold by Shreves Philatelic Galleries in 2002. The auction catalog, which Brody collaborated on, is considered one of the definitive studies of the issue.

Brody serves as chairman of the research committee of the Smithsonian Institution’s Council of Philatelists. He is also chairman of the United States Stamp Society, president of the American Philatelic Research Library, and treasurer of World Stamp Show-NY 2016.

He has held numerous positions at the Collectors Club, often using his decades of experience as an investment advisor to help assure the financial health of the club.

At the dinner, Brody’s two sons and their families joined about 50 other guests to hear a gentle roasting by Collectors Club president Edward J.J. Grabowski. The Lichtenstein award, named for one of the most famous philatelists in American history, is given each year.

Brody concluded his humor-laden acceptance speech by saying that his greatest reward in philately “is not the stamps, the essays and proofs, the postal history or the awards, but the people you get to meet and spend time with.”

Among the other awards bestowed at the dinner were a grand award to Nicholas Lombardi for his one-frame exhibit on the 3¢ Jackson stamp of 1902, and a reserve grand award to Mark Schwartz for stampless-period postal markings of Newbury and Newburyport, Mass.

A prize was given to Kathryn Johnson for her presentation of Victorian-era philately of Ceylon at the Collectors Club in April 2013, and Vernon Morris was recognized for the best article of 2013 in The Collectors Club Philatelist for “The Philadelphia Despatch Post.”