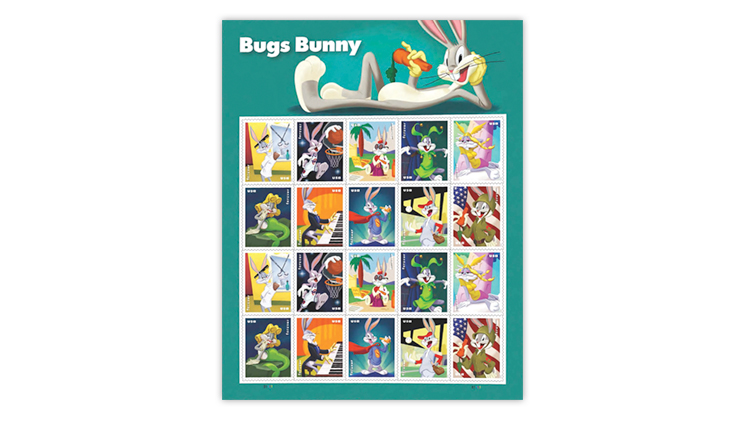 The pane of 20 Bugs Bunny forever stamps has an issue date of July 27. Each stamp has newly created artwork showing Bugs in a classic pose.

The nondenominated (55¢) stamps are pictured in the Quarter 3 issue of USA Philatelic, the retail mail-order catalog published quarterly by the USPS.

The Bugs Bunny stamp set has a July 27 issue date. Details of the new issue were published beginning on page 1 in the Aug. 3 issue of Linn’s Stamp News. When that Linn’s story was prepared, only one Bugs Bunny stamp image had been revealed.

As described in the article, the 10 stamps feature Bugs in various guises, with new illustrations inspired by classic cartoon scenes.

In the first row of stamps, Bugs is shown as a barber, a basketball star, a Hollywood screen idol, a jester, and an operatic Brunhilde.

In the second row, Bugs is depicted as a mermaid, a concert pianist, a Super-Rabbit with cape, a baseball pitcher, and a U.S. Army sergeant with a flag backdrop.

That final image is also enlarged on the cover of the new catalog.

Across the top of the stamp pane, Bugs is shown reclining while holding a partially eaten carrot in his right hand and propping up his head with his left.

“Enjoy the impeccable impersonations and masterful masquerades of the famous cartoon ‘wascally wabbit,’” the catalog said. “The original artwork on this pane of 20 stamps showcases Bugs Bunny in some of his most memorable getups.”