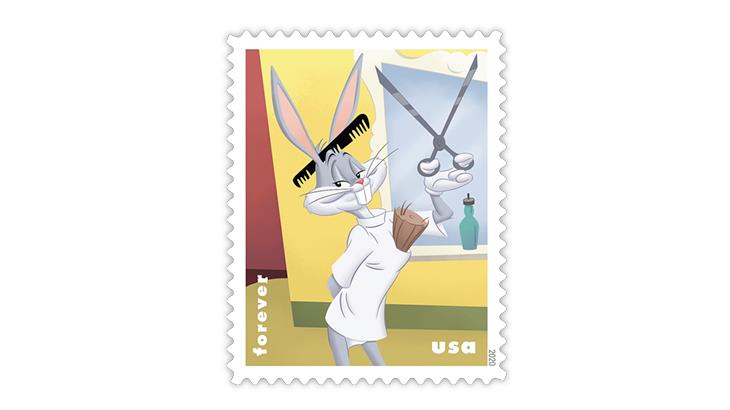 The first of 10 Bugs Bunny forever stamps that will be issued July 27. The United States Postal Service plans to reveal each stamp image in the set individually over the course of several days before the stamps are issued in an online event. 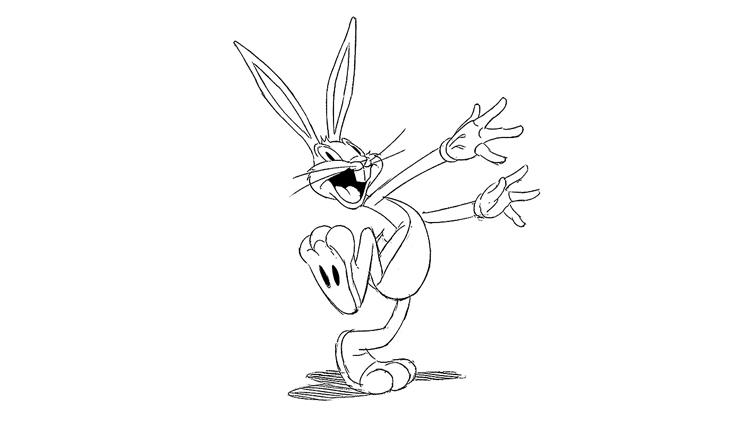 Prior to releasing images of the individual Bugs Bunny forever stamps, the United States Postal Service published two sketches of Bugs that will appear on the back of the pane. 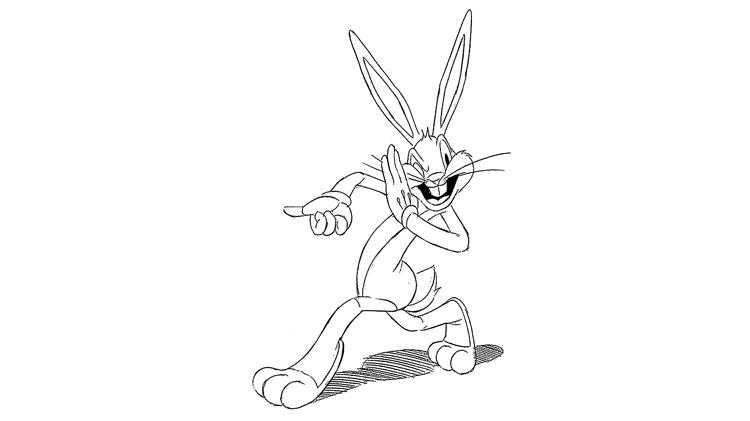 The sketches of Bugs Bunny on the back of the stamp pane were created by Warner Bros. Animation artists, as were the stamp illustrations. 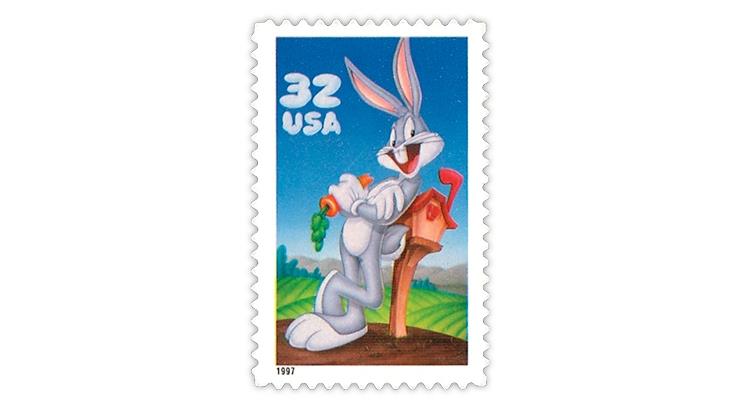 The U.S. Postal Service issued its 32¢ Bugs Bunny stamp in 1997, the first in a series of stamps featuring characters from Looney Tunes cartoons. 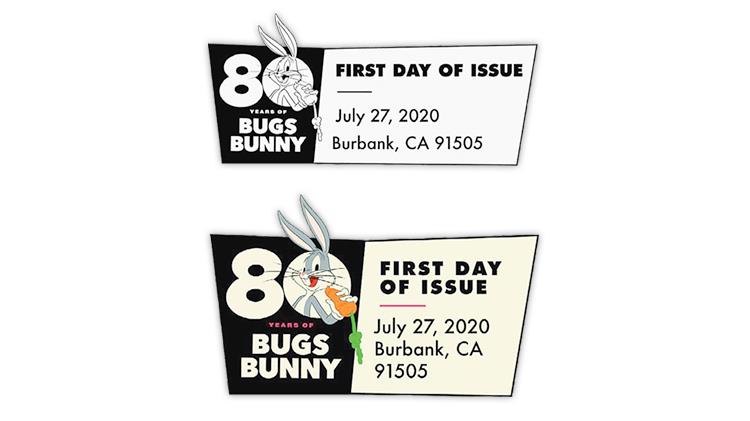 The U.S. Postal Service has prepared two similar pictorial first-day cancels for the Bugs Bunny 80th anniversary set. Each postmark shows a depiction of Bugs coming though the "0" in "80" and snacking on a carrot.
Previous
Next

A smart-aleck animated rabbit named Bugs Bunny made his first appearance in 1940, in an 8-minute short-subject cartoon titled A Wild Hare.

The United States Postal Service is issuing a new set of 10 Bugs Bunny forever stamps on July 27 to commemorate the 80th anniversary of that cartoon debut.

The Postal Service announced July 16 that it would begin revealing individual images of the stamps on the afternoon of July 17.

The first of those 10 images, shown here, depicts Bugs as a barber in an updated adaptation from the 1950 cartoon Rabbit of Seville.

The word “forever” reads up from the lower left corner in dropout white lettering, and “usa” appears in white lowercase letters in the lower right corner.

The remaining stamps will be pictured in an upcoming issue of Linn’s Stamp News.

The stamps will be first shown on the USPS Facebook and Twitter pages, beginning with a 1 p.m. Eastern Time presentation Friday.

Additional sneak peeks will be scheduled before the stamps are issued, according to the Postal Service.

As of July 16, the Postal Service had also revealed two sketches of Bugs Bunny that will be printed on the back of the 20-stamp pane.

Shortly after the Bugs Bunny issue was announced on June 23, the Postal Service published a detailed description of the 10 stamps.

“On the first row of stamps Bugs appears as a barber with white smock and pointy scissors; achieves ‘airness’ on the brink of a slam-dunk in his basketball jersey; is debonair in beret, ascot, smoking jacket, and shades as a screen idol in his Hollywood digs; jokes it up as a jester in bright green garb and fool’s cap; and does a diva turn as an operatic Brunhilde in blonde braids and winged helmet.

“On the second row of stamps, Bugs is a mermaid in a curly 1940s up-do; is classically composed in white tie and tails at the piano; heroically poses as the carrot-powered Super-Rabbit with blue suit and red cape; warms up to pitch a big-league ballgame; and helps save the planet as a World War II U.S. Army staff sergeant in combat uniform with an American-flag backdrop.”

When the nondenominated (55¢) stamps are issued, the Postal Service will hold a “virtual stamp dedication ceremony” on its Facebook and Twitter social media pages, beginning at 1 p.m. Eastern Time July 27.

Because of the ongoing COVID-19 pandemic, there haven’t been any in-person first-day ceremonies for U.S. stamps since March 4, when the Arnold Palmer forever stamp ceremony was held in Orlando, Fla.

The next steps are to scroll down the page to “Posts” and click on the event, according to the Postal Service.

On either platform, it might be necessary to refresh the webpage at intervals until the event becomes available.

The stamps will be sold in post offices nationwide on the issue date in full panes of 20 only. Orders for the new stamps are also being taken on the Postal Service’s retail site.

The stamp pane includes a decorative header with “Bugs Bunny” lettered across the top.

Warner Bros. Animation artists also created sketches of Bugs Bunny that appear on the reverse side of the pane.

The new 10-stamp set will mark the second appearance on U.S. stamps for Bugs. The first came in 1997, when the Postal Service issued its 32¢ Bugs Bunny stamp in a pane of 10 (Scott 3137). A variety issued at the same time includes one imperforate stamp alongside nine stamps with die-cut separations (3138).