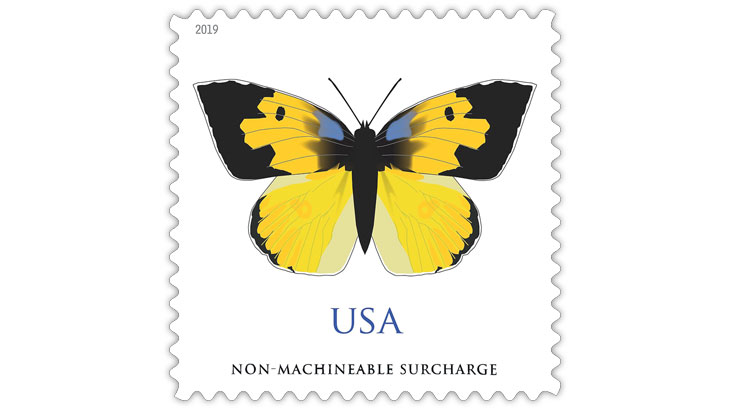 The seventh stamp in the United States Postal Service’s Butterfly series for the nonmachineable surcharge rate depicts the California dogface butterfly. The new stamp is being issued Jan. 27. 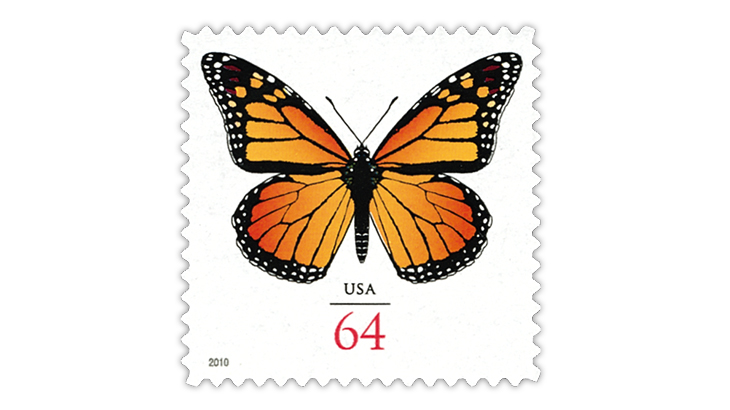 The Butterfly series began in 2010 with the 64¢ Monarch Butterfly stamp. The seven stamps in the series have all been designed by USPS art director Derry Noyes, with illustrations by Tom Engeman. 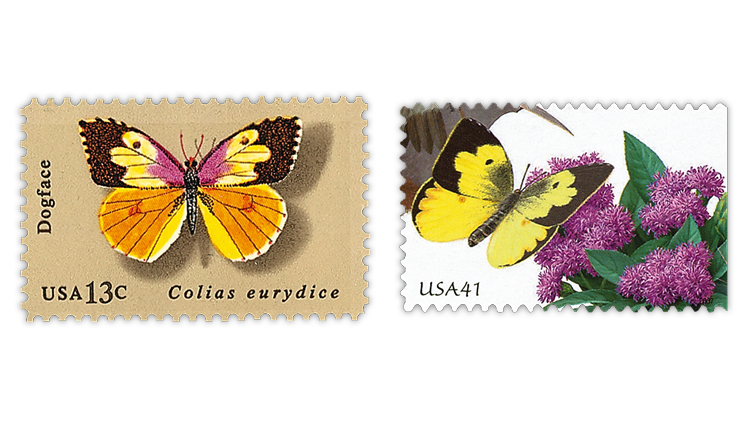 Dogface butterflies have appeared previously on U.S. stamps. One 13¢ stamp from the 1977 Butterfly set identifies Colias eurydice, the scientific name formerly applied to the California dogface butterfly. The 2007 Pollination set of 41¢ stamps includes on 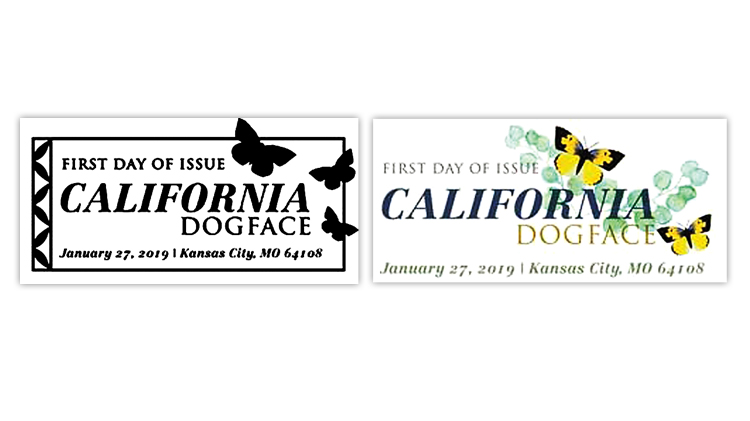 Pictorial first-day cancels for the California Dogface Butterfly stamp will be issued in black and in color.
Previous
Next

A new United States Butterfly stamp with a familiar design is being issued Jan. 27.

The nondenominated (70¢) California Dogface Butterfly stamp for the domestic first-class nonmachineable surcharge letter rate was initially announced by the U.S. Postal Service in September 2016. It was illustrated and reported in the Oct. 10, 2016, Linn’s Stamp News.

Originally intended as a 2017 issue, the stamp’s release was delayed until this year.

It is the seventh in a series of Butterfly stamps for the nonmachineable letter rate, a premium postage rate for mail not exceeding 1 ounce that does not conform to USPS standard size and shape requirements.

One example that falls into this category is a square greeting card envelope.

The Postal Service introduced the nonmachineable first-class rate in May 2009.

The nonmachineable rate is changing Jan. 27, as are a select number of other rates for domestic mail. That rate was most recently 71¢, a combination of the 50¢ standard letter rate and the 21¢ nonmachineable surcharge.

With the Jan. 27 rate change, the letter rate increases to 55¢, and the surcharge decreases to 15¢. As a result, the new Butterfly stamp will sell for 70¢ and will have that postage value when used on any mail, until the next time the rate changes.

The Butterfly series began May 17, 2010, with a 64¢ stamp depicting the monarch butterfly. All seven stamps in the series so far have featured artwork by Tom Engeman and have been designed by USPS art director Derry Noyes, and all have been issued in panes of 20.

The Postal Service will not hold a first-day ceremony for the new stamp. Kansas City, Mo., is designated as the official first-day city.

The California dogface butterfly (Zerene eurydice) is only found in California and was designated as that state’s official state insect in 1972. The male butterfly shows the striking colors and wing patterns resembling a poodle face in profile that give it its unusual name. The female displays subdued soft yellows with a single small dark spot on each forewing.

Formerly classified as Colias eurydice, the California dogface butterfly was previously depicted on a 13¢ stamp from the 1977 Butterfly set (Scott 1714).

A close relative, the southern dogface butterfly (Zerene cesonia), displays similar patterns but only in yellow and black, not showing the bolder color variations of the California variety. The southern variety, which appeared on a 41¢ stamp in the 2007 Pollination set (Scott 4156), has a range that includes the southern United States, Central America and the western reaches of South America.

The Postal Service is offering two pictorial postmarks for the Butterfly stamp: one in black showing three butterfly silhouettes, and another in color depicting two males.

It is expected that the pictorial cancels will be applied to first-day covers prepared for sale by the Postal Service, but no announcement about FDCs or possible press sheets for the issue had been made as of early January.