Camels on stamps of the classic era fun to collect 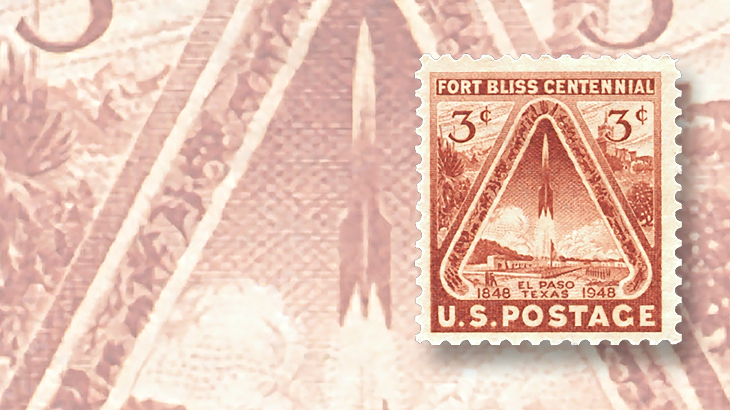 A camel is almost hidden in the design of the 1948 Fort Bliss Centennial stamp. 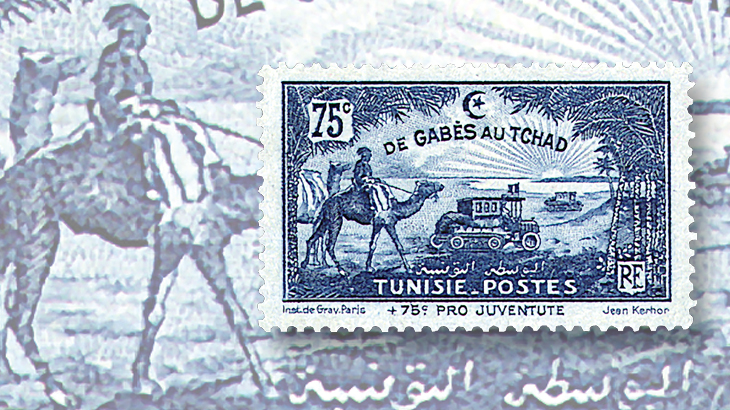 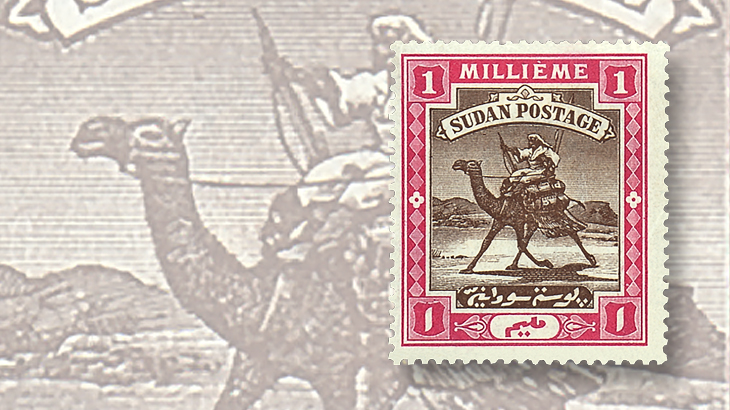 Sudan’s early stamps are known for their Camel Post design. This stamp was issued in 1898. 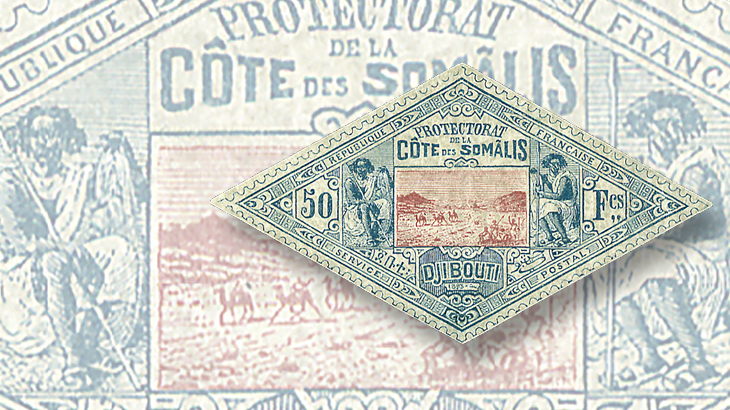 Camels crossing the desert are pictured in the center of this diamond-shaped Somali Coast stamp from the 1894-1902 issue. 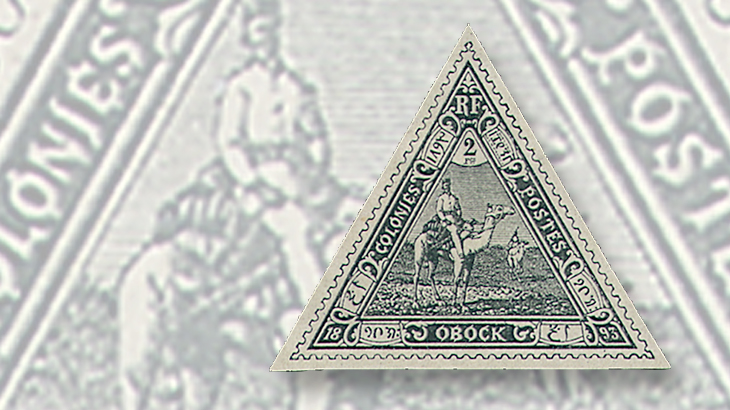 The first camel stamps were issued in 1893 by Obock, a seaport on the Gulf of Aden. 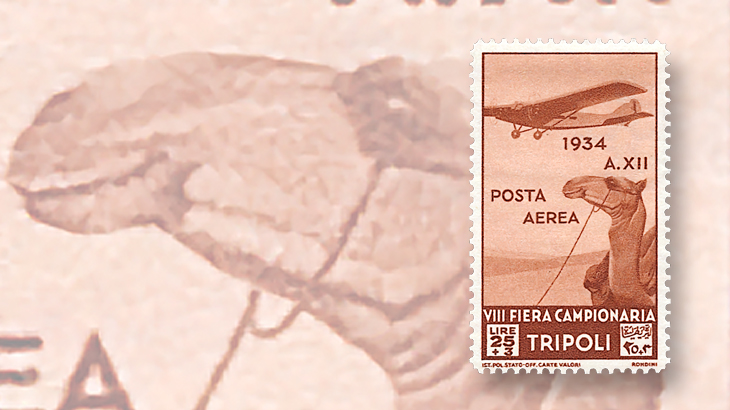 A camel and airplane are pictured together on this 1934 airmail stamp from Libya. 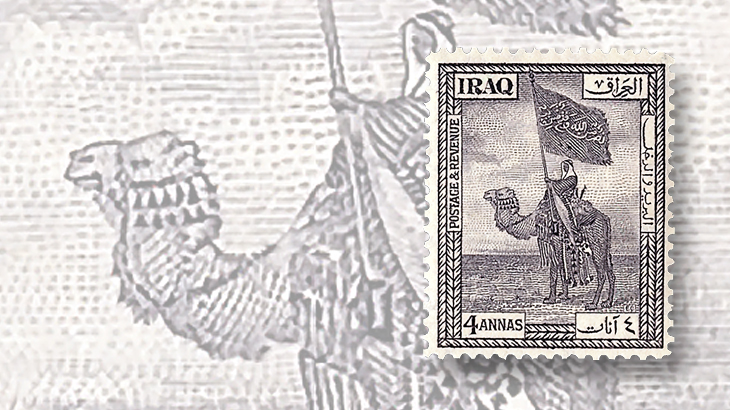 A stamp in Iraq’s first issue of 1923 shows the colors of the Dulaim Camel Corps. 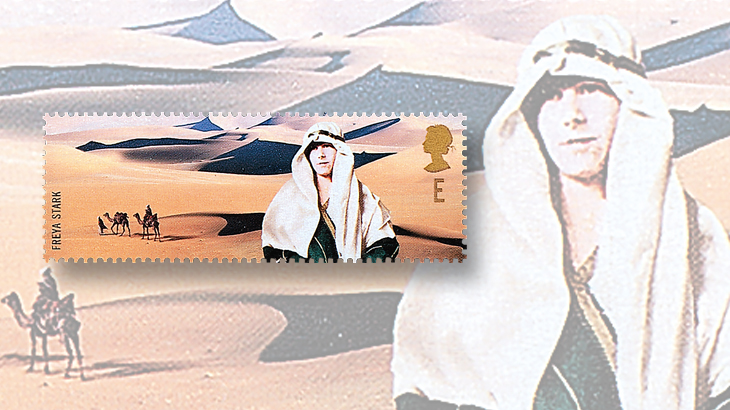 Camels are included on a 2003 stamp from Great Britain honoring explorer and travel writer Freya Stark. 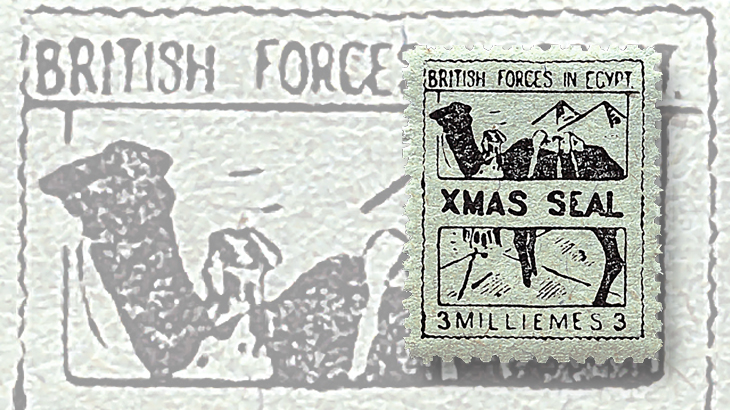 Egypt’s military stamps of the 1930s were for use by the British military forces in Egypt and their families on letters sent to Great Britain and Ireland. This stamp for use on Christmas mail features a camel and the pyramids.
Previous
Next

Known as “ships of the desert,” camels have provided transportation, food, and fuel for people living in desert regions for more than 3,000 years, and their importance has long been recognized on postage stamps.

In the classic era of postage stamps, 1840-1940, more than 30 postal entities issued stamps that picture camels, according to the American Topical Association’s checklist of camels and dromedaries.

While that checklist includes all members of the camelid family — one-humped dromedary and two-humped Bactrian camels, llamas, alpacas, vicunas, and guanacos — in this article, I am mainly focusing on the dromedary, also known as the Arabian, camel.

The dromedary camel made its first appearance on postage stamps in 1893. Two triangular stamps of Obock, a 2-franc bronze green and a larger 5fr red (Scott 44A and 45), feature the same basic design generally called “Camel and Rider.” If you look closely, though, you can see that the design actually shows two camels and two riders. These stamps are imperforate but have simulated perforations.

A seaport on the Gulf of Aden, Obock only briefly issued stamps under its own name from 1892-94. During that time, though, a second camel design was used on denominations ranging from 2fr to 50fr (Scott 60-64). The 50fr stamp is expensive, valued at $1,000 both unused and used in the 2016 Scott Classic Specialized Catalogue of Stamps and Covers 1840-1940. The catalog warns that counterfeits exist of this stamp, as well as of the 25fr denomination (63).

Probably the most well-known camel stamp design is Sudan’s Camel Postman, which has appeared on more than 100 stamps from 1898 to 2003 (Scott 9, 557). Many of these stamps, even those from the classic era, are affordable. There also are a variety of types of Camel Postman stamps to choose from, including airmail, Official and army Official stamps.

The Sudan Study Group, which calls its journal the Camel Post, summarizes these stamps: “Camel Postman stamps replaced the overprinted issue in March 1898. Designed by Captain Stanton, an officer in Kitchener’s Army during the campaign to recapture Khartoum, they were used for more than 50 years and today still appear on Sudan stamps in a modified form. They are amongst the most colourful Sudan issues and popular with collectors.” The website of this study group based in the United Kingdom is www.sudanstamps.org.

Another classic-era camel issue from Sudan is the 1930-35 airmail set (Scott C4-C-15) featuring a statue of Gen. Charles George Gordon on a camel.

Other stamps of the classic era that depict military uses of camels include camel corpsman on 1939 stamps of Aden (Scott 17, 26) and the desert infantry with camels in the background on a 1934 airmail stamp of Italy (C70).

An article about these stamps in the July 12, 1927, issue of The Children’s Newspaper reported that the corps was founded in 1920 by Capt. Leslie Williams as a desert police force “to keep the peace between quarrelsome tribes.”

The members of the corps were Bedouins. According to the article, the designer of the stamp, Edith Cheesman, described the standard bearer as a “handsome man with a scarlet head-cloth, blue tunic, white sleeves which nearly sweep the ground, and a sword magnificently sheathed in gold and ivory, while his camel is a white animal trapped out in orange, green, and scarlet, with a magenta saddle-cover.”

A drawing of a camel in front of the pyramids appears on Egypt military stamps issued in the 1930s to pay a special reduced rate for British military forces and their families in Egypt (Scott M2, M4, M6 and M10). These stamps were affixed to the back of envelopes and known as seals. Because the camel stamps were sold around Christmas time, they are inscribed “XMAS SEAL” across the center of the design.

One of the most recently issued camel stamps also has a war theme. This stamp, part of Australia’s Oct. 27, 2015, Animals in War set, features the Imperial Camel Corps that served in the Middle East during World War I.

Several classic-era stamps show camels with other modes of transportation. For example, a set of 1928 Child Welfare semipostals from Tunisia (Scott B47-B53) depicts camels beside a motor caravan.

If you look closely, you can find a camel pictured along with other modes of transportation on a United States stamp issued just after the classic era of 1840-1940.

On the United States 3¢ Fort Bliss Centennial commemorative released Nov. 5, 1948 (Scott 976), the history of transportation in the West is portrayed by tiny images in the triangular frame surrounding the main design of a rocket and the fort. The camel is near the top of the triangle on the left side. Behind the camel are people traveling by foot, a Conestoga wagon, horses and a stagecoach; ahead are motorized vehicles, including a tank and a truck.

Why is a camel included on this stamp? For a brief period in the middle of the 19th century, the United States Army experimented with using camels as pack animals in the Southwest. A survey expedition led by frontiersman, military officer, and Indian Affairs superintendent Edward Fitzgerald Beale, complete with camels as pack animals, stopped at Fort Bliss in El Paso, Texas.

The camels on two other U.S. stamps are much easier to spot: a carved, wooden camel on a 1988 Carousel Animals stamp (Scott 2392), and three camels shown in silhouette on the Magi Christmas stamp issued in 2014 (4945).

If you want to collect camels on modern as well as classic stamps, they can be found on stamps featuring a variety of subjects, including Christmas, stories and art, and adventurers.

For example, a nondenominated “E” stamp in Great Britain’s 2003 Extreme Endeavors set honoring Freya Stark (Scott 2120) shows the travel writer and explorer in the foreground and a vast desert scene with two camels in the background.

In an interview by Betty Patchin Greene published in the September/October 1977 issue of Aramco World magazine, Stark described her first encounter with camels: “I remember my first sight of the Rawallah camels south of Damascus. I had never seen camels loose before outside a zoo, and suddenly the whole earth seemed full of these creatures, browsing along, apparently going very slowly. But really although I was young then, I could hardly keep up with them as I rushed to take photographs. That was my first vision, and I’ve never forgotten it.”