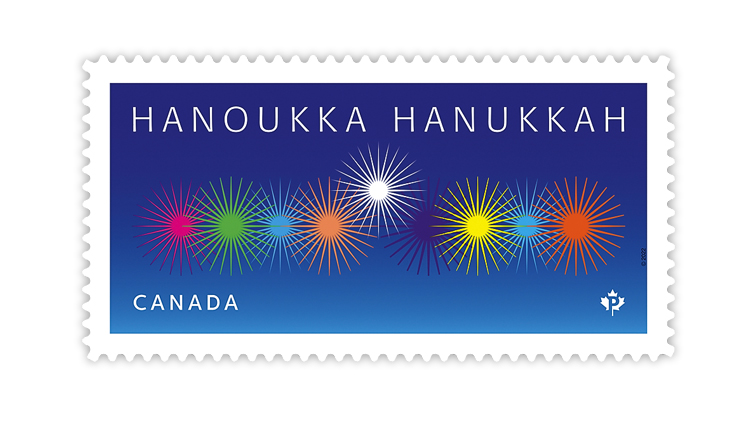 Canada Post issued a stamp Nov. 7 in celebration of Hanukkah. Canada Post calls the stamp design, which shows representations of flames from the candles on a menorah, a “fresh take on an age-old tradition.”

On Nov. 7, Canada Post issued a stamp in celebration of Hanukkah.

The permanent-rate Hanukkah stamp pays the basic domestic letter rate (currently 92¢) and is available in booklets of six.

In a departure from recent Hanukkah issues from Canada Post, this stamp does not depict an actual menorah but instead features nine multicolored representations of flames.

“A fresh take on an age‑old tradition, this new Hanukkah stamp conveys the joyful spirit of the Jewish Festival of Lights through a fun, flamboyant interpretation of the flames on a hanukkiyah (a special eight‑branched menorah),” Canada Post said in its Details magazine for collectors.

Stamp designer Andrew Lewis told Canada Post that his goal was to put a new spin on a classical image.

He said that the stylized flames create an energy that reflects the joy and excitement of the holiday. He also noted the significance of the blue background and central white shamash (helper candle), saying that those colors hold special importance in Judaism.

This central white flame and the flames appearing to the right of it in the stamp design are shown on Canada Post’s first-day cover with the same blue background as the stamp.

Hanukkah, which will take place this year from nightfall on Dec. 18 to nightfall on Dec. 26, celebrates the rededication of the Second Temple in Jerusalem during the second century B.C., following the successful revolt of the Maccabees against the Seleucid Empire.

The lighting of the menorah during the eight-day celebration commemorates the miracle of a single day’s supply of oil lasting for eight days in the rededicated temple.

The Hanukkah stamp measures 49 millimeters by 25mm and was printed in a quantity of 120,000 booklets of six (product no. 414214111). Lowe-Martin printed the stamps by seven-color lithography.

The official language of the province of Quebec is French, and the stamp and FDC present text in French before the English translations.