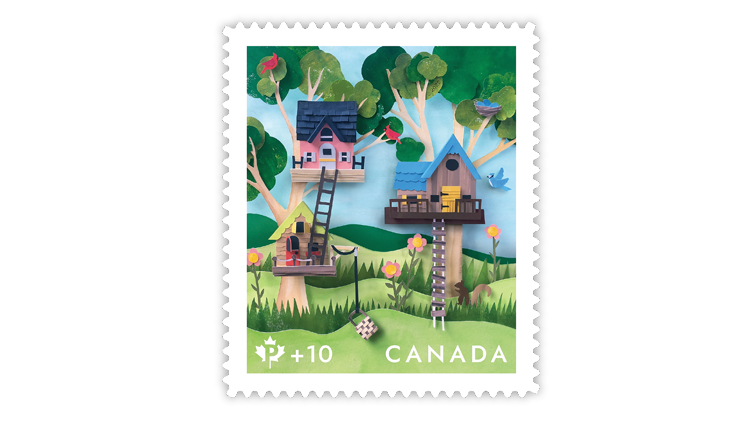 On Sept. 19, Canada Post issued a semipostal stamp as part of a stamp series that raises funds for children through the Canada Post Community Foundation.

The stamp design shows three tree houses perched in two trees. Two birds that look like cardinals are in one tree. The other tree supports a nest with three blue eggs. Below the nest flies a bird that resembles a blue jay. A squirrel sits among four flowers in bloom on the ground below the tree houses. A ladder connects two of the tree houses, and one has a basket attached to a rope leading to the ground.

“There’s something magical about treehouses,” Canada Post said. “They inspire imagination, offer a place for make-believe play and provide a setting in which to dream. Creating spaces for children — literal, virtual and figurative — is of vital importance. That’s why the Canada Post Community Foundation exists.”

Canada Post is selling the self-adhesive stamp in booklets of 10 with $1 from the sale of each booklet going to the Canada Post Community Foundation. This foundation provides more than $1 million of grants annually to Canadian charities, organizations and schools.

Joanne Todd illustrated the stamp, and Chad Roberts Design Ltd. is credited with the design. The stamps were printed in a quantity of 220,000 booklet panes of 10.

The Canada Post ordering numbers are 414193111 for the booklet pane of 10 and 414193131 for the FDC. The purchase price of the FDC includes a 10¢ donation to the Canada Post Community Foundation.

This semipostal is the 11th issue in an annual series that began in 2012 (Scott B19) with the establishment of the Canada Post Community Foundation. In a March 16 press release, Canada Post said that since 2012 “the Foundation has granted $11 million to more than 1,000 community projects nationwide.”