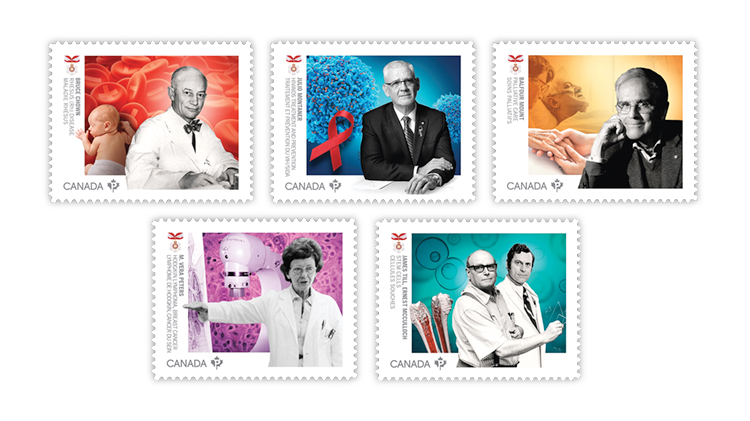 The Medical Groundbreakers set comes in a self-adhesive booklet of 10 (product number 414152111).

“This enduring tribute to Canadian health heroes honors their groundbreaking work and brings more awareness to their contributions and discoveries,” said Lissa Foster, executive director of the Canadian Medical Hall of Fame. “We can all be immensely proud of the global impact of these pioneering Canadians and our country’s contributions to health, here and in the world.”

The September issue of Canada Post’s Details magazine for collectors announced the new stamp set and described the achievements of each leader.

Dr. Bruce Chown (1893-1986), a scientist, played a key role in developing a treatment for the deadly rhesus (Rh) disease, a condition where antibodies in a pregnant woman’s blood destroy her offspring’s blood cells. Born in Winnipeg, Manitoba, he established the Winnipeg Rh Laboratory in 1944, and his team paved the way for the development of a protein injection that has saved the lives of countless babies.

The stamp design includes a newborn alongside Chown’s photo.

Argentinean-Canadian Dr. Julio Montaner (born 1956) is executive director and physician-in-chief at the British Columbia Centre for Excellence in HIV/AIDS. Since the late 1980s, he has authored more than 800 scientific publications on HIV/AIDS. Through his extensive research he has helped advance the treatment of the disease.

Montaner made advances in a highly effective medication strategy known as “treatment as prevention” to significantly reduce the amount of HIV in the bloodstream. His stamp includes a red HIV awareness ribbon.

Dr. Balfour Mount (born 1939) is credited with coining the term “palliative care” and advocating for a compassionate whole-person approach to caring for individuals suffering from a life-threatening illness. In 1975 he founded the world’s first comprehensive palliative care service based in a teaching hospital at the Royal Victoria Hospital in Montreal, Quebec.

The stamp honoring Mount carries an image of a person being cared for at the last stages of life.

Dr. M. Vera Peters’ (1911-93) achievements include advancements in the treatment and management of Hodgkin lymphoma and breast cancer. A 2010 inductee into the Canadian Medical Hall of Fame, the organization explains the Toronto-born oncologist’s tenacity: “One cannot fully appreciate the impact of Dr. Peters’ work without taking into account the challenges she faced as a female in an era when women were not universally accepted as scientists. To graduate in the 1930s from medical school and emerge out of the 1960s as a world-class figure in oncology is a testament to her dogged determination and ingenuity.”

The background of the Peters commemorative represents her work in radiation therapy.

In the 1960s, Dr. James Till (born 1931) and Dr. Ernest McCulloch (1926-2011) became the first scientists to confirm the existence of stem cells and establish their properties, which has remained unchanged today. Their work has been vital for the treatment of many hard-to-manage diseases and conditions. The two scientists appear on the fifth stamp in the set.

Colour Innovations printed the stamps by five-color lithography. A total of 130,000 booklets were printed. The stamps measure 38 millimeters by 30mm.

Canada Post serviced 2,000 first-day covers for each stamp with a pictorial cancel showing the Rod of Asclepius: the well-known medical symbol of a snake twisted around a staff.