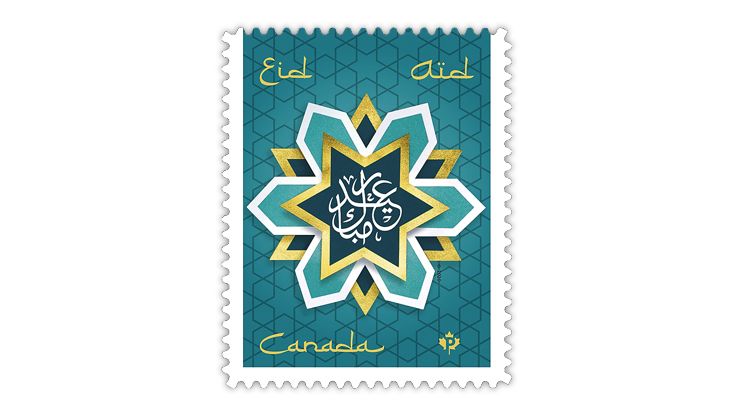 Canada Post’s second Eid stamp features the Arabic greeting of “have a blessed Eid” in calligraphy. The stamp celebrates the Islamic festivals of Eid al-Fitr and Eid al-Adha and is being issued April 24.

There will be no unveiling ceremony for this stamp, nor for any other Canadian stamps to be issued in April and May, according to Canada Post.

Canada’s first Eid stamp was issued May 24, 2017 (Scott 2998), to mark Eid al-Fitr and Eid al-Adha, the two most important festivals in the Islamic calendar. That design included Arabic script that reads “Eid Mubarak,” which translates to “Have blessed Eid.”

The new nondenominated permanent rate stamp (currently 92¢) features the same greeting in Arabic calligraphy. The greeting is surrounded by Islamic geometric art in gold and turquoise with another pattern in turquoise in the background. Stars are predominant in the pattern.

The stamp also has the following inscriptions in gold: “Eid” in English in the upper left and Arabic in the upper right, “Canada” in the lower left, and the “P” and maple leaf emblem (to designate a permanent-rate stamp) in the lower right.

In announcing the stamp, Canada Post said, “Eid al-Fitr and Eid al-Adha are celebrated by Muslims around the world, including more than one million Muslims in Canada.”

Context Creative, a design firm based in Toronto, Ontario, designed the new Eid stamp, and Lowe-Martin printed it in booklets of 10. A total of 1.3 million stamps (130,000 booklets of 10) were printed.

The product numbers are not available yet.

Canadian stamps and related items are available on the Canada Post website. Stamps and FDCs are available by mail order from Canada Post Customer Service, Box 90022, 2701 Riverside Drive, Ottawa, ON K1V 1J8 Canada; or by telephone from the United States or Canada at 800-565-4362, and from other countries at 902-863-6550.