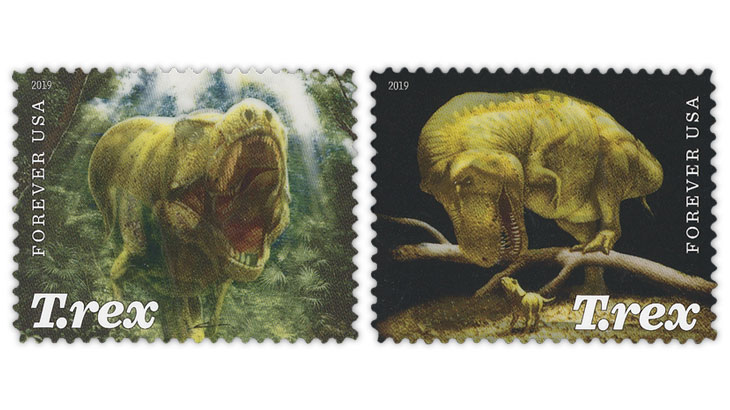 Lenticular technology, first employed on a U.S. issue in 2018, brings to life two of the four 2019 Tyrannosaurus Rex stamps. The plastic overlay on the stamps simulates movement and changes in the design when the stamps are gently rotated from side to sid

In 2019, the United States Postal Service issued 117 varieties of stamps and postal stationery. Of this total, 73 are commemoratives, 38 are definitives, five are special stamps issued to recognize occasions such as the Christmas holiday season, and one is a Priority Mail stamped envelope. For comparison, 105 varieties were issued in 2018, 128 in 2017 and 154 in 2016.

A handful of significant anniversaries are celebrated on 2019 stamps, such as the bicentennials of Alabama statehood and the birth of poet Walt Whitman, the 150th anniversary of the Transcontinental Railroad, and the 50th anniversaries of the first manned landing on the moon and the Woodstock music festival.

Unless stated otherwise, the stamps described in this year-end summary are denominated “forever,” meaning they will always satisfy the current first-class domestic mail rate for a 1-ounce letter. Two 2019 stamps, Love Hearts Blossom and Year of the Boar, satisfied the 50¢ first-class letter rate when they were issued Jan. 10 and Jan. 17, respectively. On Jan. 27, their cost and postage value jumped a nickel, from 50¢ to 55¢, to meet the new letter rate that went into effect that day.

Gregory Hines, a dynamic entertainer who made substantial contributions in dance, film and theater, is shown on the 42nd stamp in the popular Black Heritage commemorative series that began in 1978 with a 13¢ stamp honoring abolitionist Harriet Tubman. A 1988 photograph by Jack Mitchell shows Hines smiling confidently while wearing a stylish red blazer and gray trousers.

The 200th anniversary of Alabama statehood is honored on a stamp that features Joe Miller’s photo taken at sunset on Pulpit Rock Trail in Cheaha State Park. Alabama broke away from the Mississippi Territory in 1817 and was admitted to the Union as the 22nd state on Dec. 14, 1819.

Legendary pop and R&B musician Marvin Gaye appears on the ninth issue in the Postal Service’s Music Icon series, which began in 2013 with three stamps paying tribute to Lydia Mendoza, Johnny Cash and Ray Charles, respectively. The Marvin Gaye stamp is the 12th overall in the series, because there are four color varieties of the 2018 stamp picturing John Lennon.

Post office murals commissioned during the Great Depression are illustrated on a set of five stamps issued in a pane of 10. Given the difficult times during which the murals were created, the artists endeavored to show uplifting scenes of community and work that would inspire viewers. Each stamp names the city and state where the mural is located.

Tennis phenomenon Maureen “Little Mo” Connolly Brinker is honored on a single forever stamp. In 1953, the diminutive 18-year-old completed the grand slam by winning all four major tennis tournaments in a single year.

Three commemorative stamps pay tribute to one of the most remarkable engineering achievements of the 19th century: the completion of the Transcontinental Railroad on May 10, 1869. Two of the stamps depict the locomotives of the Central Pacific Railroad and the Union Pacific Railroad that met at Promontory Summit, Utah, for the ceremonial placement of the golden spike, which is shown on the third stamp.

Eye-catching abstract works by artist Ellsworth Kelly are illustrated on 10 stamps issued in a pane of 20. The paintings pictured on the stamps span a period from 1951 to 1990, a 40-year snapshot of a dynamic career that covered seven decades.

“America’s last battleship,” the USS Missouri (BB 63), is featured on a single commemorative issued on the 75th anniversary of the famed ship’s commissioning on June 10, 1944. USS Missouri is perhaps best known for hosting the Sept. 2, 1945, ceremony that officially marked the surrender of Japan to the Allied nations at the end of World War II.

George H.W. Bush is honored on a stamp picturing Michael J. Deas’ portrait of the 41st president of the United States. During World War II, Bush flew almost 60 combat missions in the Pacific theater. He later served as director of the Central Intelligence Agency and as vice president to President Ronald Reagan during 1981-89.

Sesame Street is celebrated on 16 stamps issued to mark the 50th anniversary of the beloved children’s television show. Each stamp pictures one well-known Muppet character from the show. Ten Muppets not featured on the 2019 set are pictured on a set of 2005 37¢ stamps that also includes one stamp for puppeteer Jim Henson, who created the Muppets.

The historic 1969 landing of Apollo 11 on the surface of the moon is remembered with a pair of stamps that pay tribute to NASA’s greatest feat of space exploration. A photograph of astronaut Edwin E. “Buzz” Aldrin on the moon’s surface graces the first stamp, while the second shows the moon with a white dot that marks the spot where Aldrin and astronaut Neil Armstrong landed in the Sea of Tranquility aboard the lunar landing module Eagle. The Moon Landing Anniversary stamps were printed on a chrome paper stock, which imparts a shimmery cast to the designs.

A panoramic view of a fair is presented on a strip of four se-tenant (side-by-side) stamps that celebrate the fun and joy of state and county fairs. Images evocative of agriculture and farming dominate the designs of the first two stamps, while scenes on the final two stamps focus on entertainment and other social aspects of fairs.

Military working dogs are commemorated on four stamps, each of which shows a stylized illustration of one of four breeds serving in the armed forces of the United States: the German shepherd, Labrador retriever, Belgian Malinois and Dutch shepherd. Dogs are a popular subject on U.S. stamps. In 2012, the USPS issued four 65¢ stamps depicting dogs at work.

The 1969 Woodstock Music and Art Fair, billed on Arnold Skolnick’s famous advertising poster as “3 days of Peace and Music,” is featured on a stamp issued to celebrate the iconic event’s 50th anniversary. Woodstock also is honored on a 1999 33¢ stamp from the 1960s set in the Celebrate the Century series.

Lenticular technology, first employed on a U.S. issue in 2018, brings to life two of the four Tyrannosaurus Rex stamps. The plastic overlay on the stamps simulates movement and changes in the design when the stamps are gently rotated from side to side. The lenticular effect on the Tyrannosaurus Rex stamps is more subtle than that seen on the 2018 Art of Magic souvenir sheet of three Rabbit in Hat stamps. Each stamp in that sheet shows a white rabbit popping out of a magician’s top hat.

Celebrated American poet Walt Whitman is pictured on a nondenominated (85¢) stamp that pays the rate for first-class domestic letter mail weighing more than 2 ounces and up to 3 ounces. The stamp is the 32nd issue in the long-running Literary Arts series that started in 1979 with a 15¢ stamp honoring novelist John Steinbeck. A 1940 5¢ Famous Americans stamp marks Whitman’s first appearance on a U.S. issue.

The seventh issue in the Butterfly series of stamps for the domestic first-class nonmachineable surcharge letter rate shows a California dogface butterfly. The nondenominated (70¢) stamp was originally scheduled to be issued in 2017. All seven Butterfly stamps feature artwork by Tom Engeman.

Ten definitive stamps in a double-sided pane of 20 depict an array of beautiful cactus flowers in full bloom. USPS art director Ethel Kessler designed the stamps using photographs by John P. Schaefer, president emeritus of the University of Arizona. Cactus flowers also are pictured on U.S. stamps issued in 1962, 1981 and 2014.

Patriotism comes to mind when viewing the Star Ribbon stamp, which depicts a red, white and blue ribbon folded into a five-point star. This definitive was printed in panes of 20, coil rolls of 3,000 and coil rolls of 10,000. Similar stylized stars appear on the 3¢ Star stamp and 37¢ Star stamped envelope of 2002, and the 2013 46¢ Star coil stamp.

Digitally created underwater views of coral reefs are illustrated on eight nondenominated (35¢) postcard-rate stamps in four different designs. The four designs, which depict various reef fish swimming among different types of stony coral, were printed in panes of 20 stamps and as coil stamps in rolls of 100.

Frogs are portrayed on four definitive stamps issued in a double-sided pane of 20. The design of each stamp places a single frog in a leafy green setting. Although not named on the stamps, the amphibians shown are a squirrel tree frog, a northern leopard frog, an American green tree frog and a Pacific tree frog.

The annual definitive set depicting the U.S. flag consists of four varieties from coil rolls of 100 by Ashton Potter and Banknote Corporation of America and double-sided panes of 20 produced by the same two contract printers. All four stamps show a spring photograph of the flag flying atop a flagpole close to the end of Chicago’s Navy Pier.

Four stamps picturing winter berries and another four illustrating decorative holiday wreaths arrived in time for the Christmas holiday mailing season. These eight stamps supplement the 2018 issues for Christmas, Hanukkah and Kwanzaa, which are still available at many post offices and online from the USPS postal store.

The 2019 Purple Heart stamp features the military medal generally awarded to members of the U.S. armed forces who are killed or wounded in action while engaging in combat operations against an enemy of the United States. It is the 11th major variety to depict the military award, and is the first of these stamps to include a purple border that matches the background of the medal and its associated ribbon.

In keeping with recent years, the 2019 program included a duo of high-denomination stamps for expedited mail services. A $7.35 Priority Mail stamp features a majestic Joshua tree, which is found only in the arid desert Southwest. A $25.50 Priority Mail Express stamp depicts the Bethesda Fountain in New York City.

They are the 21st and 22nd stamps in the American Landmarks series that started in 2008, and, like the others in this series, feature poster-style illustrations by Dan Cosgrove of Chicago. The $25.50 Bethesda Fountain has the largest face value of any U.S. postage stamp in history, dethroning the 2018 $24.70 Sleeping Bear Dunes stamp.

The final 2019 issue is a single semipostal stamp to raise awareness of and provide funds for the treatment of post-traumatic stress disorder. The 65¢ price of each Healing PTSD stamp includes a 10¢ surtax earmarked for the Veteran Affairs National Center for PTSD. In the stamp’s design, a green plant emerges from the ground, which is carpeted with brown fallen leaves.

Under its current semipostal program, the Postal Service is scheduled to issue five semipostal stamps during a 10-year period. Each stamp is to be sold for no more than two years.